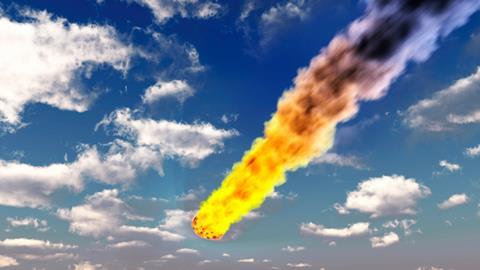 All of life’s nucleic acids could have extraterrestrial origins

All five nucleobases of RNA and DNA have been discovered in meteorites for the first time. These chemicals are essential ingredients for life on Earth and several purines and also two pyrimidines – thymine and cytosine – not previously detected in meteorites were found.

The findings come from an analysis of three carbonaceous meteorites, known to be rich in organic molecules. The discovery ‘provides additional support for the theory that the delivery of these compounds to Earth by meteorites may have played a role in the emergence of genetic functions for early life’, according to astrobiologist Daniel Glavin at Nasa, which provided one of the meteorites.

Previously, seven purine bases and one pyrimidine base had been detected in meteorites. But experiments had relied on a hot formic acid extraction method to release the nucleobases from meteorite powders. This ‘may have led to the destruction of some nucleobases’, suggests Glavin.

The group based in Japan used a milder extraction method and a new high-resolution mass spectroscopy technique to quantify nucleobases down to parts per trillion. Liquid chromatography was also used to identify structural isomers of nucleobases.

‘The detection of cytosine is very surprising since it has been regarded as very weak against aqueous processes possibly experienced on the meteorite parent body,’ notes Yasuhiro Oba, an astrochemist at Hokkaido University in Japan, who performed the sample analyses.

These building blocks of DNA and RNA were extracted from three meteorites: Murchison, arguably the most famous meteorite for studying extraterrestrial organic molecules, which fell in 1969 in Australia; the Murray meteorite, which exploded at high altitude in 1950 and came down east of Murray, Kentucky; and the Tagish Lake meteorite, a large object that hit a frozen lake in Canada in 2000.

Similar concentrations of nucleobases in these meteorites ‘were also synthesised in laboratory experiments simulating photochemical reactions in the interstellar medium, providing additional evidence that nucleobases can be formed in space’, says Glavin.

Chemist Uwe Meierhenrich at the University of Nice Sophia Antipolis in France comments that ‘this finding confirms that the molecular selection involved in the origins of life took place on Earth, and not before’. He adds that ‘this further confirms our models on the molecular origins of life on Earth, as the same hypothesis seems valid for amino acids’. Over 90 amino acids have been found in meteorites, while biological organisms employ 21 of them, suggesting that there was extraterrestrial delivery of a broad range of organic molecules.

Based on lab experiments and models, some astrobiologists suggest the composition of early Earth’s atmosphere was too oxidising to readily form nucleobases by natural processes, notes Glavin. ‘Therefore, meteorite delivery of nucleobases to the Earth would have provided a source of nucleobases for the emergence of life.’

Also, the pyrimidines were present at extremely low concentrations. ‘If these results are representative of typical pyrimidine concentrations in meteorites, then geochemical synthesis on early Earth would likely have been responsible for the emergence of genetic material rather than inputs from extraterrestrial delivery,’ Callahan says.