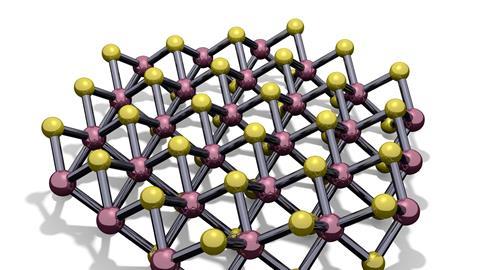 Graphene is the poster child of the one dimensional revolution, but it’s not the only compound that can make incredibly thin sheets with remarkable properties. Here’s Brian Clegg.

There’s little that can surprise us anymore about the remarkable capabilities of carbon, in the atom-thin sheet of graphene – but some simple inorganic compounds have structures with similar potential. High amongst them is the molybdenum-sulfur compound molybdenum disulfide. 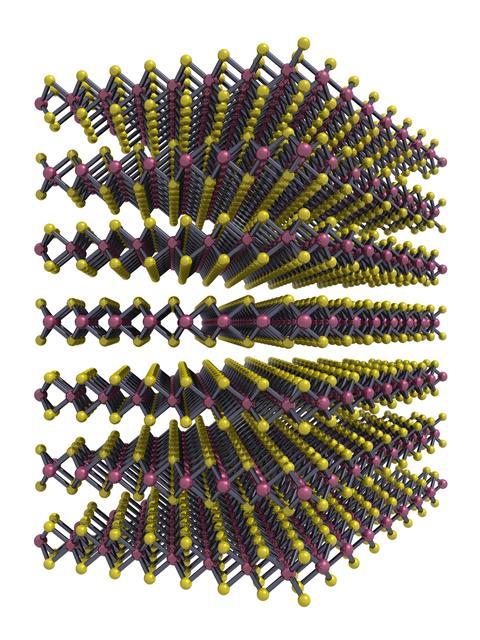 As the name suggests, this is MoS2, occurring naturally as the ore molybdenite, from which molybdenum itself is derived. Not only does molybdenum disulfide have some similar tricks to graphene up its sleeve, it has a physical resemblance to graphite, as a crystalline black solid with highlights of shiny grey. Although the chemical nature of the compound was only discovered in the late eighteenth century with the isolation of molybdenum, the mineral has been used since ancient times, when it was often confused with graphite and sometimes with lead sulfide or galena (the word molybdenum itself comes from molybdaena which was a lead ore).

Molybdenum disulfide’s thinnest structure is only three atoms deep, with a central layer of molybdenum atoms linked to layers of sulfur on either side. This form was only discovered in 2011 and was originally produced, like graphene, by using adhesive tape to peel off a single layer – though more recently by growing sheets on a silicon wafer. These thin, transparent sheets have limited interaction, sliding over each other easily, making a dusting of small particles of molybdenum disulfide an excellent dry lubricant, capable of withstanding high temperatures – up to around 400 °C. Its melting point is even higher at an impressive 1,185 °C, but above 400 degrees it tends to oxidize unless it’s in an oxygen-free atmosphere. Molybdenum disulfide is also mixed into more conventional grease lubricants (often given the pet name ‘Moly’, spelled m-o-l-y) to give added anti-wear action.

Although molybdenum disulfide also turns up as a catalyst for hydrogenation and removal of sulfur, its most interesting potential role is in electronics, where a sheet of the substance has excellent semiconductor properties. Notably, it has an unusual band gap, the energy jump between electrons locked into the substance and those that can freely conduct. Molybdenum disulfide has a ‘direct’ band gap, which means that it is easy for an electron jumping across the gap to absorb or release a photon of light, making the compound effective as a light source or photon detector, as well as being more practical than silicon for producing thin layer transistors.

Production of traditional silicon-based electronics is getting ever closer to its physical limits, but in October 2016, what is considered the smallest ever transistor was made with molybdenum disulfide and carbon nanotubes. The transistor’s active part, the gate, was just 1 nanometre across – contrasting with the 20 nanometre gates in the smallest commercially available silicon chip transistors. By December, researchers from Stanford had moved on from single transistors to show how sheets of molybdenum disulfide can be used to make practical electronic circuits on a scale smaller than their silicon equivalents. It’s still early days for this material, but it is rapidly moving from an experimental material to a mass market contender. 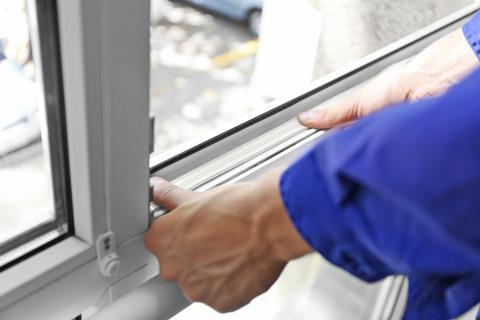 Not only do the physical properties of the transparent sheets of molybdenum disulfide make for extremely thin transistors, which could be built into windows or spectacles, but the sheet is also flexible, which makes molybdenum disulfide one of the options for circuitry that can be built into paper-like screens, go-anywhere solar panels, clothing and more. And the structures aren’t limited to simple sheets – like carbon, molybdenum disulfide can form fullerene structures, including nanotubes. These are showing promise as electrodes in experimental high performance lithium ion batteries.

In parallel, molybdenum disulfide is proving interesting as a filter for producing drinkable water from seawater. For some time, experiments have been undertaken using graphene as a porous membrane to allow water through but to block the flow of salt ions in a mechanism called reverse osmosis. After a number of thin film materials were computer modelled for this role in 2015, molybdenum disulfide came out ahead, coping with more than half as much water again as a graphene filter. This seems to be because the pores that allow water through tend to be surrounded by molybdenum, which pulls the water towards the pore, while the adjacent sulfur atoms push the water away, encouraging it to clear the pore and move beyond.

With its traditional lubricant role, molybdenum disulfide has something of a nineteenth century, oily rag feel – and yet nothing could be more up-to-date than its single layer applications. As proved the case with graphene, molybdenum disulfide shows that it’s not just the basic properties of a substance, but the remarkable capabilities of novel structures that can give a compound a big – if small – future.

That was Brian Clegg, on the potential of molybdenum disulfide. Next week, Michael Freemantle finds how a viscious chemical weapon inspired some of the earliest cancer chemotherapy trials.

In 1917 and 1918, armies on both sides of the conflict fired shells containing an oily liquid known as sulfur mustard or mustard gas. This was perhaps the most notorious of all the chemical warfare agents used in the war. So how did good come out of this form of chemical warfare? The answer lies in the abnormally low white blood cell counts of soldiers who had been exposed to sulfur mustard.

Join us next week to find out more. Until then, get in touch through the usual routes, and don’t forget to check out the Chemistry World book club podcast, in which we pick a new popular science book to discuss each month. Find that on iTunes or at chemistryworld.com/podcasts. I’m Ben Valsler, thanks for listening.