Scientists in the US have for the first time made a solar energy collector using carbon nanotubes that can directly convert optical light in to a direct current. It is hoped these optical rectennas may one day rival established technologies, such as the silicon solar cell. 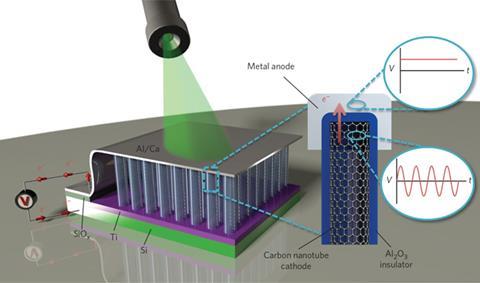 The optical rectenna, which converts optical light in to a current, was first predicted 40 years ago

First theorised as a practical way of converting visible light into electricity by Robert Bailey in 1972, an optical rectenna is also known as a rectifying antenna. Baratunde Cola from the George Woodruff School of Mechanical Engineering at the Georgia Institute of Technology, who led the team that developed the rectenna, says that the device is ‘a combination of an antenna and a diode’.

The antenna collects electromagnetic radiation, converts the signal into an alternating current, much like a radio antenna, before sending the current through a diode, which converts it to a direct current.

Until now, researchers have only ever been able to produce a microwave rectenna. The reason why it took 40 years to go from theory to the creation of an optical rectenna, according to Cola, is two-fold. You have to create an antenna small enough that it can resonate at an optical wavelength and you need an array big enough to generate large amounts of current. The more rectennas you can fit into this array, the more likely it is you will collect a significant signal. Past research has stumbled when it came to achieving this goal, however, as any reduction in diode size will always lead to a build-up of electrical resistance.

Cola and his colleagues have circumvented both of these problems by adopting a slightly different philosophy. Rather than construct a rectenna with two discrete components that act as either an antenna or diode, the team have used carbon nanotubes that can be both simultaneously.

To achieve this, the team grew a 10µm high vertical array of billions of carbon nanotubes on a silicon substrate via chemical vapour deposition. Each nanotube is coated with an aluminium oxide insulator and capped with an aluminium anode. The metal–insulator–metal sandwich structure allows the nanotube array to behave as both a light harvester and a tunnel diode. Electrons excited within the nanotube by light absorption tunnel through the insulator to the metal anode and the current flow is converted into DC.

To test the rectenna, the researchers exposed the device to visible and infrared light, and found the array produced DC voltages of up to 68mV after exposing it to light with a wavelength of 1064nm. Cola explains that the device overcomes the resistance problem that has dogged previous attempts to produce a voltage because the array is more than the sum of its parts. ‘If you just had one carbon nanotube isolated … its resistance to receiving free-propagating radiation would be high,’ he says. ‘But since it’s buried inside this array, as it tries to re-emit energy to the ambient it’s reabsorbed by neighbouring [nanotubes].’

Peter Gammon, a Royal Society of Engineering research fellow at the University of Warwick, UK, believes that Bailey’s 40-year old theory on optical rectenna technology has finally been vindicated but remains sceptical over its potential to one day rival silicon solar cells. ‘This work represents a qualified breakthrough of sorts,’ Gammon tells Chemistry World. ‘However, the worry is that this self-professed best in class device still quotes a maximum efficiency … six orders of magnitude worse than conventional silicon solar cells.’

For Cola, however, the device is an effective proof-of-concept that can only lead to further advances. ‘As we worked on this for six years, there was a lot of scepticism about whether an optical rectenna could actually be made,’ he says. ‘We’re showing a clear correlation between some of the theory that’s been developed and how the device operates, which helps point a path towards how we can make these devices more efficient.’