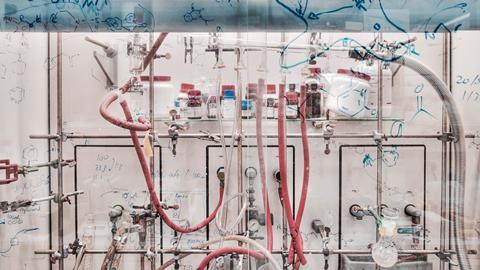 Study finds that chemists have become reliant on popular methods as discovery rates for new reaction types are slowing down. What does that mean for organic chemistry?

Although the number of reactions chemists report has grown exponentially over the past years, fewer and fewer new reaction types are being discovered, scientists say. Using cheminformatics, researchers have analysed millions of organic transformations deposited in databases and patent repositories, concluding that most synthetic chemistry relies on reusing well-known methods.

‘A couple of million reactions are reported every year, but let’s be honest, many of them are applications of the same known methodologies,’ says study leader Bartosz Grzybowski of the Polish Academy of Sciences and Ulsan National Institute of Science and Technology, South Korea. ‘We’ve actually been discovering reactions – at most – at a linear rate, maybe a couple of thousand a year.’

To classify reaction types, the researchers defined rules, considering mechanistically relevant atoms located near the reaction centre, and scripted them into an algorithm. ‘We then went through millions of reactions and categorised them,’ explains Grzybowski. ‘We did this at different points of time [starting with data from 1900] to see how the number of new reactions changed.’ 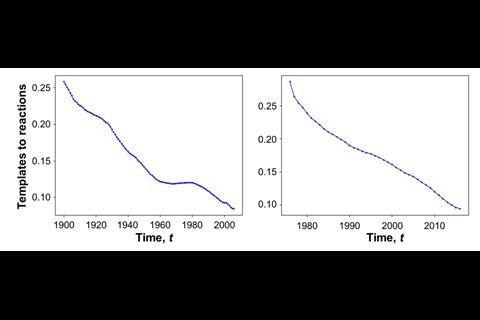 According to the study, the number of new reaction types described in the academic (left) and patent literature (right) compared with all reactions executed has decreased over time 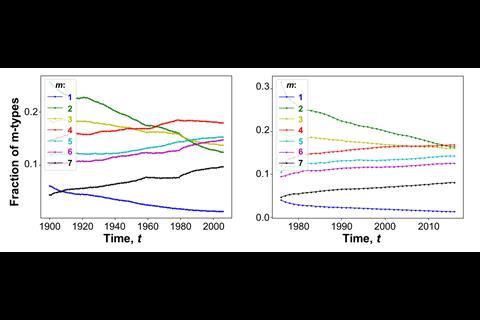 A hundred years ago, organic chemistry was dominated by simple reactions (complexity index m = 2 or 3) such as esterifications and Michael additions. But between 1960 and 1980, chemists started reporting more complex reaction classes – cycloadditions or Pauson–Khand reactions for example – in the academic literature (left). This crossover is currently happening in the patent literature (right)

The team also found that while discovery of reaction types has slowed down, processes are becoming more complex, with fewer steps being required to produce challenging scaffolds. ‘If you consider cascade transformations or multicomponent reactions, these are actually gaining popularity,’ Grzybowski says.

‘This tells us that all simple organic and organometallic reactions between two reagents have already been discovered,’ comments physical organic chemist Guillaume Berionni from the University of Namur, Belgium. ‘Organic synthetic chemists now have to combine their research efforts,’ he adds. ‘We have to team up with computational chemists and spectroscopists, and use new approaches such as automated chemistry and organic syntheses driven by artificial intelligence.’

‘There was a crossover point about two decades ago, where the complex reactions overtook the simple ones,’ Grzybowski points out. Simple transformations like SN2 reactions are as good as exhausted. ‘In over a hundred years, I think people have pretty much tried every possible combination,’ he says. 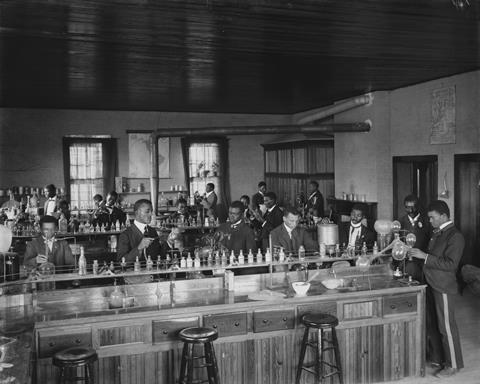 Organic chemistry labs – and the attire worn in them – have changed since George Carver’s time. Here, the prominent agricultural chemist (second from right) supervises students at the Tuskegee Institute, US, in 1902

But this doesn’t mean the field is reaching saturation (see The hottest news in synthesis), comments Jean-Louis Reymond, who develops computational methods for organic synthesis at the University of Bern, Switzerland. ‘The reactions might stay the same, but nowadays a lot of effort is put into making the reagents and reaction conditions more sustainable,’ he says. ‘Let’s consider the recent Nobel prize for organocatalysis – it’s not only about new reactions but also about simpler and better ways to carry them out.’

Synthetic chemist Maria Fernández-Herrera from Cinvestav Mérida in Mexico agrees that organic synthesis is moving in a direction where discovering new materials or greener processes for applications in different fields is gaining in importance. ‘A very clear example is the synthesis of metal–organic frameworks and other related structures,’ she says. ‘The contributions to organic chemistry in terms of new reactions are null – as these materials are made using widely known procedures – but the final goal is to build useful structures.’

Apart from producing useful molecules, popular reactions tend to be robust, use cheap ingredients and work with a wide range of substrates. Looking at which types became popular, Grzybowski’s team found that only a few hundred to a thousand of them ever did. ‘This means that you can only make predictive machine-learning models for a fraction of chemistry,’ he says – there is simply too little data available for most reaction classes to train an algorithm on. The team also uncovered mistakes in the repositories. ‘We sort of identified which reactions should be kicked out of these databases because they’re likely just errors,’ Grzybowski explains.

Organic chemist David Nagib at Ohio State University, US, points out that although simplification is great for teaching purposes or to train algorithms, scientists can’t ignore reactions’ subtleties. ‘For example, the Diels–Alder [reaction] can couple an electron-rich diene with a deficient alkene or the exact opposite pairing – and can occur by concerted, stepwise, polar or radical mechanisms – catalysed by heat, light, acid, enzymes, metals and even organocatalysts. Merging these all together as a single reaction type risks ignoring the value and utility of each of these chemistries.’

The hottest news in synthesis

Although Grzybowski’s team found that researchers have been discovering fewer and fewer reaction types, it’s not all doom and gloom in organic chemistry labs. Here’s what four experts think are some of the most exciting transformations developed in the last few decades.

This reaction has ‘transformed the way rings and, in particular, macrocycles are made. Macrocycles are now appearing everywhere in drugs.’ – Jean-Louis Reymond

‘Strategies such as the chiral pool or the recent [Nobel prize] laureates’ organocatalysis are methods with a huge impact in the pharmaceutical and agrochemical industries.’ – Maria Fernández-Herrera.

They are ‘tools that generate radicals more easily and they are enabling a renaissance of new chemistry discovery’. – David Nagib

Nagib adds that many reaction classes have made huge leaps since they were first discovered. Carbon–hydrogen bond functionalisation has grown from a mechanistic oddity to revolutionising drug discovery, and click reactions can now be performed in living animals, he says. ‘For proof that the Buchwald–Hartwig amination is no mere Ullmann reaction, just look at its transformational impact on drug discovery over the past few decades!’

And new reactions can come from unexpected places. A team led by Suzanne Blum from the University of California, Irvine, US, recently discovered how to repurpose an electrophilic cyclisation – a version of the decades-old Larock indole synthesis – to make trisubstituted alkenes. The result is a completely new type of functional group transfer reaction.

As the field of organic synthesis continues to evolve, so do the reactions that remain on chemists’ wish list. ‘I, personally, am a big believer in multicomponent complex rearrangements,’ Grzybowski says. ‘One step and you can build complexity like crazy. That’s my favourite!’