Are the last half century’s worth of results from widely-used spectroscopy tool wrong? 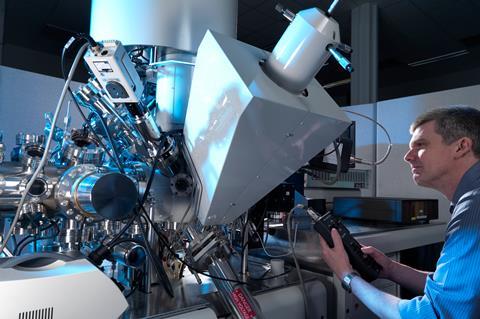 An XPS in use. Questions are now being raised over the trustworthiness of results obtained on certain materials

X-ray photoelectron spectroscopy (XPS) is one of the most widely-used techniques to detect and identify molecules on surfaces, and its use has grown dramatically in recent years. However, the standard technique used to calibrate XPS on semiconducting or insulating surfaces is worse than useless, say two spectrocopists, and as a result countless suspect results have entered the literature.1

XPS is based on the photoelectric effect: the Nobel prize-winning discovery made by Albert Einstein in 1905 explaining why frequency, not intensity, determines whether or not light can liberate electrons from a material. This established that light comprised quanta – now called photons. When a photon does liberate an electron, the electron comes out with less energy than the incident photon. The difference is the potential energy needed to extract the electron, or the binding energy. XPS works by bombarding a surface with x-rays and using the energies of the emitted electrons to infer the binding energies of the material’s electrons. These constitute a spectral fingerprint for the material. Kai Siegbahn shared the 1981 physics Nobel prize for developing the technique.

[Having] no method is better than the wrong method

The problem is that when electrons are liberated from a surface it can accumulate positive charge and therefore holds its remaining electrons more tightly. This is easily avoided in a conductive sample by connecting the surface to earth, so that it regains the lost electrons and remains neutral. For non-conductive samples, however, this is ineffective. ‘Your peaks are moving constantly on the screen as you are measuring,’ explains spectroscopist Grzegorz Greczynski of Linköping University in Sweden. ‘That makes life very difficult for XPS.’

Siegbahn’s suggestion that dirt inevitably accumulates on the sample in a spectrometer provided a convenient solution. He reasoned that this would be in electrical equilibrium with the sample, so spectra could be measured simply by assigning electrons in the 1s orbital of this ‘adventitious carbon’ a fixed binding energy of 285eV and measuring other peaks relative to it, much as tetramethylsilane is used as a reference peak in NMR spectroscopy. 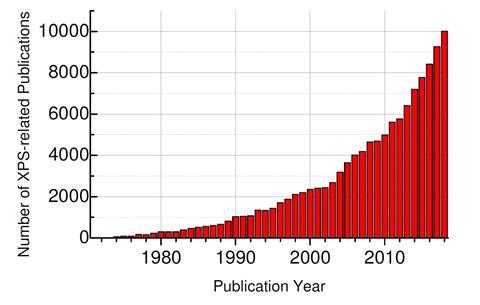 Even some of Siegbahn’s students were not convinced though. ‘You don’t really know what you are referencing to,’ says Greczynski. ‘It comes from the pollution in the air, it depends on where you store your sample, it can look different depending on what kind of surface you expose to the atmosphere.’ Nevertheless, XPS has been used ever since, and, say Greczynski and co-author Lars Hultman, has been partly responsible for the large spreads in binding energies reported for many important materials. In the past 20 years, the number of papers using XPS data has grown more than tenfold. ‘Chemists realised that this technique would be very useful so they use it a lot,’ says Greczynski. ‘I think people see it as relatively easy.’

Ironically, Greczynski says, as the number of papers using XPS has risen and it has become a canonical analytical tool, the number of true experts in it has fallen. Current international standards suggest that the carbon 1s reference should be used with caution. ‘What does this even mean?’ asks Greczynski. Inexperienced researchers sometimes use it even with conducting samples. ‘They have a perfect method, but they see that in other papers people have referenced to carbon 1s so they think that they should do it too!’ In a 2017 paper, Greczynski and Hultman demonstrated that following this protocol could lead to physically impossible results.2

Moreover, say the researchers, scientists often interpret spectra with insufficient scepticism. ‘When true experts in XPS measured a material that has a wide reported spread of binding energies, they would not draw definite conclusions from that,’ he explains. ‘But many people these days get a number, look up the tables and say “That could be three different things”, so they pick out the one that matches the theory they have in their heads before they start to write the paper.’ This problem only gets more severe as materials science advances, say the researchers, and novel materials are developed that, for example, often contain the same element in multiple chemical states. ‘The risk of data misinterpretation is an increasing function of system complexity,’ they write.

Time for a change

Greczynski and Hultman advocate abandoning carbon 1s referencing altogether and acknowledging that, at present, there is simply no satisfactory way to calibrate binding energies in non-conductive samples. ‘[Having] no method is better than the wrong method,’ says Greczynski. ‘I’m sure this problem could be solved, but as 99% of the community is convinced we have a good method there are no efforts in this direction.’

Donald Baer of Pacific National Northwest Laboratory in the US agrees that ‘as an absolute reference standard the carbon 1s peak of adventitious carbon is likely incorrect in most cases and thus it has little value. Nonetheless, it remains useful in many ways.’ Cedric Powell of the US National Institute for Standards and Technology in Maryland agrees that the paper, together with the authors’ previous work, ‘has raised an important issue that needs to be addressed by the XPS community’.

Powell, Baer and other leading materials scientists have recently published an open letter expressing concern that, as materials analysis techniques have become routine, expertise in data interpretation has declined.3 ‘The problems are not unique to XPS,’ says Baer. ‘There are many challenges to a good deal of other materials data in the literature.’