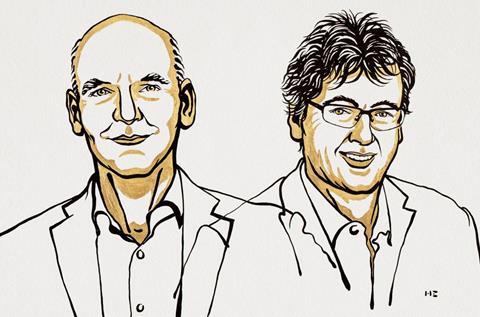 If you’re interested in learning more about the 2021 Nobel prize in chemistry then our feature article goes into greater detail about what asymmetric organocatalysis is and why it won the prize, and includes interviews with both laureates.

Work that has created new, environmentally friendly ways of making molecules has won the 2021 Nobel prize in chemistry. Benjamin List and David MacMillan were recognised by the Nobel committee ‘for the development of asymmetric organocatalysis’.

List, based at the Max Planck Institute for Coal Research, and Princeton University’s MacMillan both made breakthrough discoveries in 2000. While working on enzyme catalysis at the Scripps Research Institute in La Jolla, California, List’s seminal discovery came when he found that a single amino acid – proline – was all that was needed to catalyse aldol reactions. ‘When I did this experiment, I didn’t know what would happen and I thought, maybe it’s a stupid idea, or somebody has tried it already,’ List told the world’s press on a phone call to the Royal Swedish Academy of Sciences earlier today. 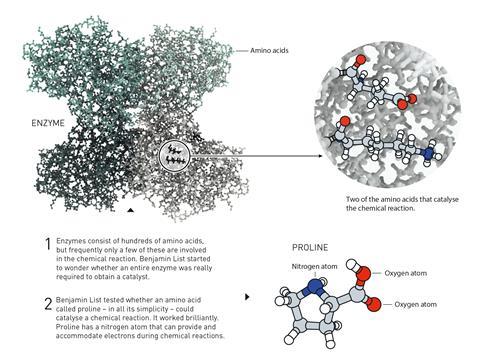 At the same time, MacMillan was looking for ways to reduce reliance on transition metals in catalysis. After considering the transfer of electrons involved in catalytic reactions, MacMillan proposed that organic molecules capable of forming iminium ions might be able to drive Diels–Alder reactions. MacMillan and co-workers coined the term ‘organocatalysis’ when they first reported the success of these experiments. 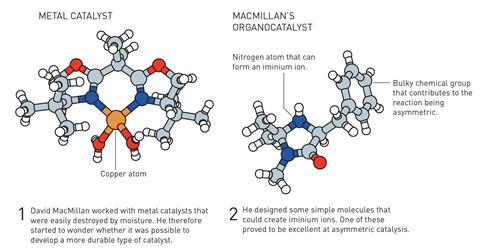 Importantly, the organic catalysts developed by List and MacMillan are able to selectively produce chiral compounds. This ability to choose the ‘handedness’ of molecules is very important in many areas of chemistry – for example in medicine, as the opposite enantiomer of a drug compound can trigger a very different biological response, potentially harming the patient.

Since 2000, the field of organocatalysis has expanded rapidly offering a new ways to catalyse chemical reactions and synthesise complex molecules without relying on biological enzymes or compounds based on heavy metals. Both List and MacMillan have developed numerous organocatalysts that can drive a wide range of chemical transformations.

The Nobel committee notes that List and MacMillan’s work has ‘had a great impact on pharmaceutical research and has made chemistry greener’. The winners will each receive an equal share of the 10,000,000 Swedish kronor (£838,000) prize.

‘Organocatalysis has made a huge impact across chemicals synthesis. It has enabled us to develop new sustainable synthetic routes to important intermediates and products,’ said Royal Society of Chemistry president Tom Welton after hearing of the announcement. ‘It has also freed us from always relying on metals, that are often elements at risk, for our catalysts. It’s unsurprising that following the seminal contributions of David MacMillan and Benjamin List there has been an explosion of research in this field.’

‘The field has huge potential to develop yet more new and exciting chemical synthesis routes in the future, enabling better medicines, high tech materials and so many other applications which can make all our lives better. I am really pleased to see this very well deserved award,’ he added.

‘In the big picture, the ability to create new compounds to address human problems is the strength of chemistry,’ said Cheng. ‘Chemists are like magicians, and with asymmetric organocatalysis, we have a new magic wand for making important drugs.’