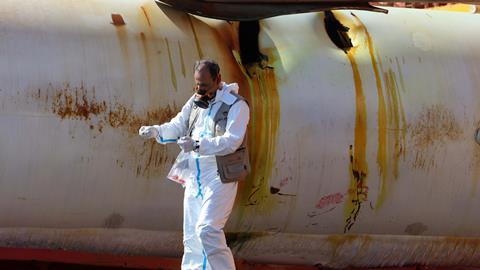 At least 13 dead in massive chlorine release in Jordan

Tanker of gas fell during loading at the port of Aqaba, injuring hundreds

At least 13 people have been killed, and over 250 more hospitalised after a tanker full of liquefied chlorine gas dropped from a crane during loading at the port of Aqaba in Jordan. The incident occurred in the afternoon of 27 June.

Footage released by state television shows the tanker falling from a crane during loading. Its contents – around 25 tons of chlorine – rapidly engulfed the ship and surrounding area. News reports suggest that the steel cables supporting the tanker snapped.

Over 120 of the injured remained in hospital the following day, and the port largely returned to normal operations. Some areas of the port, as well as nearby grain silos, remain closed for further health and safety inspections.