Chemists in the US have developed a strategy for creating cyclic diarylethers by replacing a carbon atom with an oxygen atom in the core framework of cyclic diarylmethanes and diarylketones. The approach uses a phosphine ligand with a nickel catalyst and could be useful for making pharmaceuticals containing a dibenzoazepine motif.

A single atom change can induce many corresponding changes in the biological properties of compounds. The conventional way to change an atom would be to remake the molecule starting from a different building block. Starting from scratch to incorporate one small change, however, uses up many resources on the rest of the molecule that does not involve the change. ‘It’s not logical or economical,’ says Junqi Li, from Iowa State University. 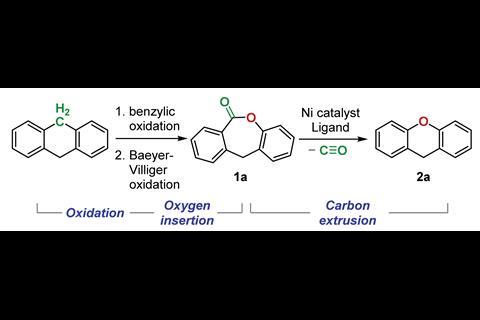 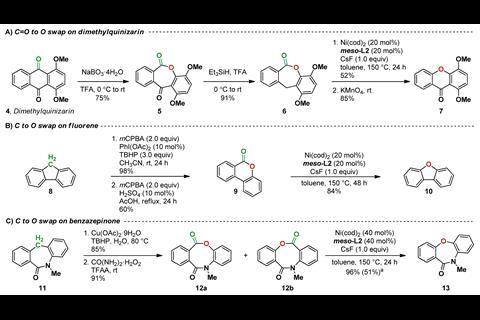 Atom-swapping reaction sequences in (A) a natural product derivative; (B) fluorene; and (C) a pharmaceutical precursor

Li is enthusiastic about the concept of substituting atoms in the carbon framework, and her team has devised a three-step reaction sequence to swap a carbon atom with an oxygen atom that works on cyclic diarylmethanes and diarylketones. First, the methylene group is oxidised to a ketone, which then allows a Baeyer–Villiger reaction to insert an oxygen, and finally a decarbonylation reaction removes the carbon.

The first two steps are established reactions so Li’s focus was on the major problem of the decarbonylation reaction. ‘Although it looks from the literature that this might be a very well-precedented reaction, we found that it was not the case because the nickel catalyst that was used in the literature was actually not able to re-form that carbon–oxygen bond. So we called this the reductive elimination problem,’ she explains.

To solve the reductive elimination problem, the team synthesised and tested 18 phosphine-based ligands to use with nickel catalysis, having undertaken extensive mechanistic studies. They discovered that the most effective ligand was a bisphosphine with two tetramethyltrioxaphosphaadamantyl groups on an aryl backbone, being bulkier and less electron-rich than the cyclohexyl-bearing ligand usually used for this type of reaction.

The effect of such a single atom change could be useful in medicinal chemistry. Li explains that swapping a carbon for an oxygen alters the polarity of the molecule, as the electronegativity of the oxygen polarises the carbon–oxygen bond, which causes changes in solubility and the electrostatic map of the molecule. ‘[Changing] from CH2 to O introduces two lone pairs of electrons at that site, which can lead to repulsion because the lone pair is more diffuse than the C–H bond, so eventually it boils down to affecting the intermolecular interaction between the molecule and its target,’ she adds.

David Rees, an organic chemist at Astex Pharmaceuticals, Cambridge, UK, is pleased to see the new research and says it ‘is an encouraging example of academic research making big strides towards the moonshot challenge of a one-step atom-swapping transformation’.