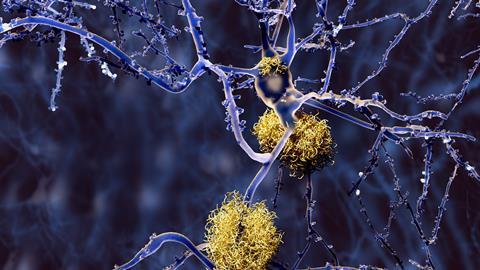 The presence of elemental iron and copper embedded in brain samples of Alzheimer’s patients is an unexpected twist on known human biochemistry. ‘These metal forms haven’t been seen in human biology before,’ says Neil Telling from Keele University in the UK, who led the study. ‘We’re seeing something beyond what we understand regarding the biochemical world.’

Metals such as copper and iron are essential for normal brain function, but they also interact with amyloid plaque proteins. The plaques are variants of the peptide amyloid beta formed by enzymatic cleavage of a precursor protein in the brain. Their exact role in pathology is a matter of debate but they are associated with Alzheimer’s disease traits, neurotoxicity and contain high levels of iron and iron deposits.

The STXM method captures chemically specific images with 20nm of spatial resolution while also providing x-ray absorption spectra that pinpoint the precise chemical state of the metal deposits. Great care was taken to rule out potential artefacts. The levels of x-ray were carefully managed and kept below thresholds that would conceivably change the samples. Attempts to artificially recreate the result using significantly higher amounts of radiation were unsuccessful.

The team is also cautious in terms of interpreting how the metals got there and the potential impact on neurodegenerative disease. ‘At this stage, we have made an observation and we have gathered together a set of plausible mechanisms,’ says Telling’s co-investigator Joanna Collingwood from the University of Warwick, UK.

For Ashley Bush, a neuroscientist and director of the Melbourne Dementia Research Centre in Australia, ‘this is very firm evidence of aggressive redox changes in the brain in Alzheimer’s disease’. According to Bush, the study offers up several interesting avenues of inquiry. For example, higher levels of iron in the brain are linked to the likelihood of Alzheimer’s deterioration and this work suggests that quality the of the iron may be important too. Changes in the valence state of iron and copper can also increase oxidative damage through the formation of free radicals and oxidative stress.

Determining the chemical pathway responsible for these elemental metals is crucial for understanding their role in disease and potential drug targets, but currently no hypothesis is ranked higher than another, says Collingwood. ‘The exciting thing, I think, for us, is to say: “OK, do we need new biology to account for this? Or is it accounted for, by one of the existing mechanisms? And is that tied into the disease process or in general what we might expect to find if we happen to be looking at amyloid plaque cores?”’