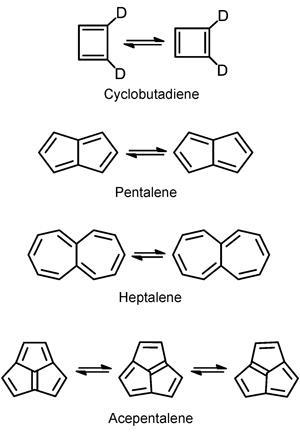 A new theoretical study of anti-aromatic systems has attributed the unusual way that their p-bonds shift to quantum tunnelling.1 These intriguing findings suggest that even though heavy atom tunnelling is rare, its effect is far from negligible.

Quantum-mechanical tunnelling is a process by which a particle can cross a potential barrier without having enough energy to go over it. It is a completely quantum effect based on the wave nature of the particle and is connected to the de Broglie wavelength, which gets shorter as the mass of the particle gets higher. Therefore, only the lightest particles can tunnel, and in chemistry it means that it is almost impossible for anything but hydrogen. Or that is what we were taught at university. Apparently, for some very specific cases where the reaction barrier is narrow enough, some ‘heavy’ atoms (ie non-hydrogen atoms) can also react by tunnelling. These rare cases normally involve reactive radicals or carbenes, but it can be seen in the double-bond shifting of cyclobutadiene and now, computational research by Sebastian Kozuch, from the University of North Texas in the US, has proven that carbon tunnelling is possible in other anti-aromatic systems.

Original studies2 on the degenerate p-bond-shifting reaction in cyclobutadiene were extended to analogous reactions on a series of polycyclic anti-aromatic hydrocarbons including pentalene, heptalene and acepentalene. In some of the reactions, such as for pentalene, Kozuch found that the contribution from quantum mechanical tunnelling to the bond-shift reaction is so large that the reaction half-life is only a few nanoseconds at 10K – at this temperature the half-life should be eternal without tunneling.

The results suggest that the systems Kozuch looked at will look blurred, like an average of two geometries, rather than be seen in a definite geometry. ‘All the C–C bonds of benzene are equal, since it is an aromatic molecule. Pentalene or cyclobutadiene are antiaromatic, with different C–C bond lengths. However, the double bonds are interchanging so fast because of tunnelling, that they will be seen as if they were aromatic. This means that experimental results on these molecules have to be seen with caution,’ he explains.

Kozuch goes on to say that this way of reacting is so counterintuitive – it works at 0K, where nothing should move at all – that it could open the door to new, unexpected chemistry.

Barry Carpenter, of Cardiff University in the UK, who was the first to interpret the unusual bond shifting in cyclobutadiene to be quantum tunnelling back in the 1980s, says Kozuch’s study raises interesting philosophical questions about what we actually mean by molecular structure. ‘Much of the computation of structures and properties of molecules in chemistry is based on the treatment of atomic nuclei as classical particles. However, work such as this reminds us that the nuclei are actually quantum mechanical objects. How fast does a tunnelling reaction have to be before the student “mistake” of drawing a resonance arrow for a reversible chemical reaction is actually the right thing to do?’