Bubbly protocells bob up and down

UK researchers have developed an enzyme-driven protocell that reversibly changes its buoyancy according to its chemical environment, allowing it to move in a controlled way between two points. The capsules could potentially be used to shuttle cargoes from one place to another.

Micro-organisms have evolved various ways to transport themselves to more favourable environments. Simple chemical analogues of such mechanisms have engaged both active matter chemists and prebiotics researchers interested in potential implications for the origins of life.

Various research groups have shown that attaching an enzyme to one side of microcapsules can catalyse chemical reactions and cause them to move. Steering is difficult, however: unless an external magnetic or electric field is applied, the motion is usually random. 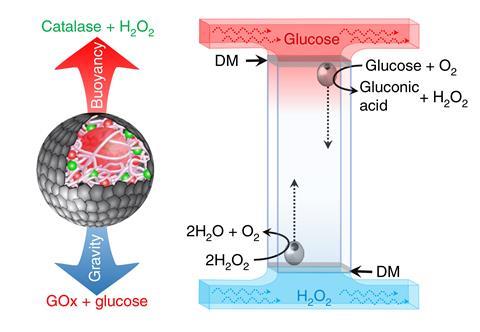 At the bottom of the tube, the peroxide concentration is higher, so the capsules produce oxygen bubbles and float to the top, where there is glucose, which can be oxidised by a second enzyme using the oxygen bubbles

Stephen Mann and colleagues at the University of Bristol have devised an elegant solution. They produced large protocells with semi-permeable walls made from DNA-supported synthetic clay. ‘The DNA is a structural component,’ explains Mann. They added two enzymes to the capsules: catalase – which catalyses oxygen production from hydrogen peroxide; and glucose oxidase – which reduces oxygen back to H2O2 in the process of oxidising glucose.

When excess hydrogen peroxide is added to the external solution, it diffuses into the capsules and the catalase produces bubbles of oxygen. Their highly elastic walls allow the protocells to expand up to six times their original volume without rupturing. The resulting decrease in density makes them float up through the solution.

Adding glucose stimulates the glucose oxidase to consume the oxygen bubbles, increasing the protocells’ density and causing them to sink again. ‘This system can oscillate back and forward for hours,’ says Mann, ‘providing you’re putting in fuel and consuming that fuel.’

The process is inspired by certain bacteria, which regulate their buoyancy by inflating internal compartments with air. ‘This is the most rudimentary way to move between two different environments,’ Mann explains. ‘We’d really like to start at the bottom, allow the microcapsules to float up, attach themselves to a surface, deliver a cargo such as nanoparticles, then drop back down and pick up another lot of nanoparticles. It would be real fun if you could build a structure at the top layer by the collective movement of all these microcapsules.’

‘What is nice about this paper is the connection to motility,’ says Jan van Hest from Technical University of Eindhoven in the Netherlands: ‘They create a system that can not only control its contents, but can also turn that into a motion. I think that’s a first in the field of artificial cell research.’