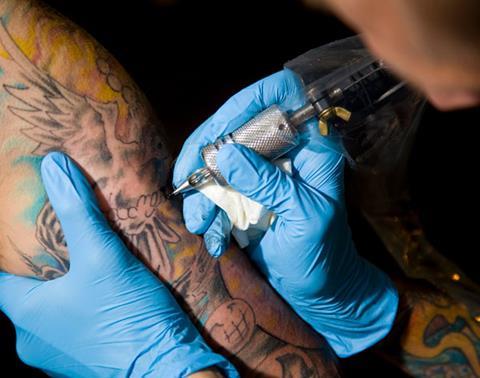 Tattooing is on the rise and what was once a niche activity has entered mainstream culture. Yet regulation has still to catch up and there is little control over the inks used and the ingredients found in them.

‘Once I had an allergic reaction to a metal based tattoo ink I then found I reacted to anything… my roll on, make up, hair dye, clothing with natural fabrics that leech dye can set me off, pen ink kills me,’ says Lauren Hodges, who had several tattoos before a red dye caused her problems. ‘I’m itchy all the time.’ However, Hodges says that even after an allergy test she can’t be sure which inks are safe for future tattoos due to a lack of information.

‘A lot of these products are quite complex in terms of their composition,’ says Alan Beswick, of the UK Health and Safety Laboratory in Buxton. ‘Speaking generally, many of them aren’t necessarily provided with good documentation as to what is actually in the product.’

Some labs, including the HSL, have tested tattoo inks but these have tended to focus on the dyes and metal salts that give the inks their colour. While black tattoo ink gets its colour from carbon nanoparticles, most of the brighter colours tend to be suspensions of various coloured minerals. However, when Ken Donaldson, who works on nanoparticle toxicology at the University of Edinburgh, investigated the literature he concluded that the size of the particles was of little issue. ‘It seems that it’s the ingredients themselves, rather than their size, which is the problem,’ he adds.

As well as the pigments, the inks can contain oils to change the viscosity of the ink and fillers including other metal salts not needed for colouration, explains Beswick. For example, he says, aluminium salts are often found in tattoo ink. ‘That’s not unusual in topical applications, but what’s different here is that they’re introduced into the dermal layer, which contains small blood vessels and nerves, he adds.

The Council of Europe has made recommendations on the composition of tattoo ink, including listing compounds that must not be used. However, while not every member state has signed up to these regulations some regions, such as the German state of Baden-Württemberg, have argued that the regulations aren’t strict enough and are trying to pass more stringent legislation.

‘Anyone can go on the internet and actually order ink products that may come from the US or the Far East or the Middle East,’ Beswick says. ‘And that makes establishing the quality and the composition of those products even more difficult.’ He suspects that the outsider status of those who tattooed in the past has meant that the practice has long escaped more strict regulation. But tattoos are not just for soldiers and sailors anymore and increasingly micropigmentation is also being used medically for procedures such as scar camouflage. This has led to some devices and dyes being approved for medical use, but the average high street tattoo parlour won’t have access to these.

So what would Beswick recommend for anyone considering a tattoo? ‘I would certainly never want to say to anyone “don’t do it” and I know lots of people personally and professionally who have tattoos,’ he says. But as well as making sure the tattoo parlour is clean he recommends asking questions about the quality of the products such as, ‘does the tattooist have any supporting information about the quality of the products that they’re using? Would it be possible to see that, even? Can they substantiate it if they’re saying “we use the best quality inks”? What are they basing that statement on?’

Beswick is keen to stress that he is wary of promoting regulation that would compel tattooists perform expensive testing on the dyes they purchase. ‘I believe, and this is the case in many industries, that quality standards are raised from within and if clients and users of the inks start to ask questions of the suppliers then the chances are that those suppliers will have to up their game.’
Indeed, the UK Tattoo and Piercing Industry Union advise their members to use large, reputable manufacturers that supply data sheets with their products. So if you’re planning to get ‘inked’ it’s probably best to ask for the material safety data sheet.