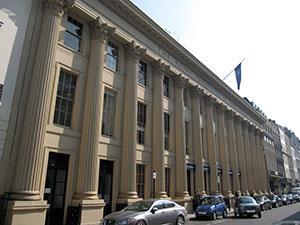 A campaign has kicked off to save the Royal Institution (RI) from having to take the drastic step of selling its iconic home at 21 Albemarle Street in London. The venerable science charity, which housed the labs of chemistry pioneers such as Humphry Davy and Michael Faraday, has found itself in dire financial trouble after an expensive refurbishment of the building.

Supporters of the RI have created an e-petition urging the government to act to preserve the country’s scientific heritage and have also created a Facebook page to coordinate action. Chemistry Nobel laureate and buckyball discoverer Harry Kroto is lending his star power to the campaign too. Kroto said: ‘Sale of the building will be the death-knell of the greatest shrine to not only British science but to the scientific culture of the world, and we must not let this happen.’

Mary Perkins, the founder of Save21AlbemarleStreet, says that her love affair with the RI began when she was 10 and attended one of its Christmas lectures. She is not a research scientists herself, but says that the building and its history are so important that she wants a coalition of everybody from ‘Nobel laureates to dinner ladies’ to get behind the campaign. ‘The Royal Institution and 21 Albemarle Street are one entity and to separate them would be criminal,’ Perkins says. ‘There are certain people and places that are linked … there must be a better way to raise the money.’

In a blog post, Kroto compared the sale of the RI to an act of cultural vandalism akin to the burning of Sophocles’ plays or destroying the Buddhas of Bamiyan in Afghanistan. He added that an imaginative business plan is needed to attract investors to pay off the RI’s debts and, given the financial straits the charity has found itself in, new governance should be considered.

The institution is no stranger to financial difficulties and has struggled to raise enough money to cover its activities over the past decade. The £22 million refurbishment of 21 Albemarle Street, begun in 2006 under the directorship of Susan Greenfield, was meant to help the RI bring in more money through conferences and other events. However, costs have mounted and the RI now finds itself with a deficit of £7.1 million.

In a statement, Richard Sykes, chairman of the RI, said that all options were being considered to put the charity back on a sound financial footing. This could mean restructuring the charity, partnering with other organisations or selling 21 Albemarle Street, which is reported to be worth £60 million.

‘This is terribly sad and worrying news,’ said RSC chief executive Robert Parker. ‘Over 200 years of remarkable scientific history has taken place at the Royal Institution’s impressive buildings in Albemarle Street, from Faraday’s invention of the electric generator to the discovery of 10 chemical elements and the determination of the atomic structure of crystals.’ He added that the RI has had a very important role in recent times, taking science to the public.

The RI was founded in 1799 with the goal of supporting cutting edge research and bringing the wonder of the sciences to the public through it lectures. To this day the RI still supports a small team of 22 research scientists and organises public lectures. These talks includes the ever popular Christmas lectures, which started in 1825 and this year featured chemist Pete Wothers’ on chemistry in the modern world.