Nanotube desalination could be put back on track

Simulations reveal what may have been holding up this promising technology

There is fresh hope for using carbon nanotubes (CNTs) to filter salt out of water in desalination membranes. Computer simulations by researchers in China show what seems to be holding up this technology – and suggest a way round the problem. 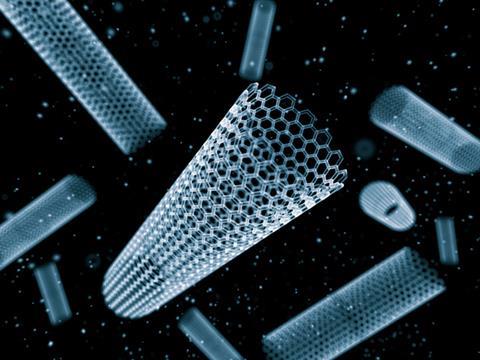 In theory CNTs look like good candidates for desalination filters. Water is predicted to flow through them rapidly, and if they are narrow enough, salt ions should be unable to because their surrounding shells of water molecules are too wide. But although thin membranes studded with these hollow tubes of pure carbon have been made, they haven’t proved capable of removing salt selectively enough.

Haiping Fang and his co-workers at the Shanghai Institute of Applied Physics say that the problem is that, if the CNTs are narrow enough to exclude salt effectively in principle, they are likely to become blocked by the ions so that water can’t flow through. They say that previous simulations of these systems have suffered from an inadequate description of interactions between the ions and the nanotubes.

The CNTs have usually been assumed to interact with ions only via van der Waals forces. But Fang and colleagues say they can also experience electrical interactions via the electron clouds in their aromatic p orbitals. When the researchers include these by merging their classical molecular dynamics simulations with density functional calculations of the electronic states and interaction energies, they find that cation–p interactions can cause the ions to get bound in the mouth of 8Å wide CNTs, obstructing water flow.

Blockages might be avoided, the team shows, by removing the ions in two ways. One is preventing cations from interacting with the aromatic rings by chemically altering the tube ends, for example by lining the rim with saturated alkane-like hydrocarbon groups at the ‘free’ edges of the six-membered rings, destroying their aromatic p bonding. In simulations, such nanotubes could achieve about 40% of the flow rate observed with pure water.

Alternatively, a powerful electric field can be applied to drag the ions away. But Fang and colleagues prefer the first option of functionalising the nanotube openings. ‘This method doesn’t have an energy cost, and also doesn’t need large equipment to generate a strong electric field, making desalination [or] purification devices more portable,’ Fang explains.

The work ‘is both timely and important’, says nanotube expert Jayendran Rasaiah of the University of Maine in Orono, US. ‘Poor salt rejection obtained experimentally has limited progress in using CNT-based membranes for water desalination,’ adds Ben Corry of the Australian National University in Canberra, who has studied such techniques. If the findings are correct, he says that this could be ‘a fundamental problem for using nanotubes in desalination applications’. However, he adds that ‘there are other explanations for the discrepancy between experiments and previous simulations that cannot yet be ruled out’.

But Corry says that even if the salt rejection of CNTs can be improved, they would not in themselves yield great energy savings for large-scale desalination: the greater permeability of CNT membranes would simply reduce the required surface area of such membranes.