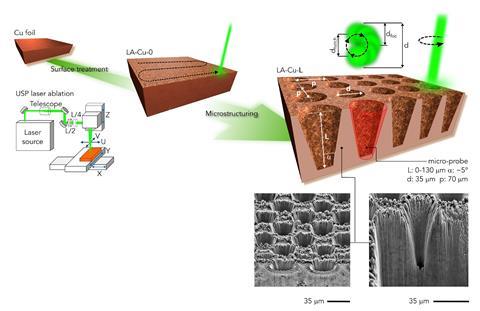 Copper catalysts are treasured by electrochemists because they can transform carbon dioxide into fuels and feedstock chemicals. However, this process is typically non-selective. Now, using laser carved copper microprobes and computational modelling, researchers have created detailed selectivity maps that predict the best reaction conditions to obtain fuels and chemicals.

‘Copper is a cheap and abundant catalyst for electrochemical CO2 fixation,’ explains Javier Pérez-Ramírez from ETH Zurich, Switzerland, who lead the study. ‘It’s magical,’ he adds. ‘It yields all sorts of multi-carbon products such as ethylene, ethanol and even propanol.’ But such versatility comes with a price tag. Copper reduces carbon dioxide to 16 different chemicals, and chemists were far from understanding and controlling this process. Pérez-Ramírez’s team wanted to go beyond previous studies, which suggested that acidity around the catalyst drove selectivity. ‘Besides, we wanted a model that allowed us to predict the outcome of the reaction,’ he explains.

Researchers used a laser to carve microscopic wells directly into a copper surface. Variation in depth generated different reaction environments, which eventually led to different distributions of products. ‘Shallow microprobes led to small molecules, such as carbon monoxide,’ says Pérez-Ramírez. On the other hand, deep microstructures hinder the flow of carbon dioxide, making the environment more basic. ‘These conditions trigger the formation of more complex products, which are more desirable,’ he adds.

After testing different depths of copper microprobes and reaction conditions, researchers fed all the experimental results into their computational model. The model analyses reaction parameters such as potential, current density, to generate selectivity maps. ‘We created a robust model that can adapt to different catalytic structures to successfully account for the outcome of the electrochemical transformation,’ says Pérez-Ramírez. This approach seems more efficient than alternatives such as varying the catalyst composition or adding doping agents. ‘We can really make copper more selective towards complex structures,’ he adds. 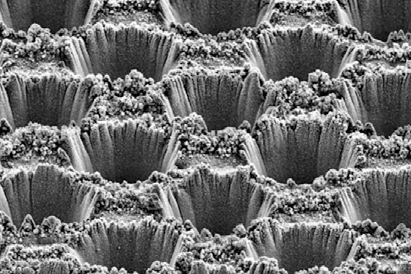 Scanning electron microscopy image of wells carved into a copper surface with a laser. Each well differs in size providing a different reaction environment, helping researchers to work out how to produce the best catalysts to turn carbon dioxide into more useful chemicals

Jing Gu, an expert in artificial photosynthesis at San Diego State University, US, says ‘this breakthrough is twofold’. First, because it is experimentally challenging. ‘Microstructured copper electrodes had never been studied in such a well-controlled and systematic way,’ she explains. Secondly, researchers have carried out a thorough computational analysis that will help better understand the mechanism of carbon dioxide reduction. These catalytic systems involve too many variables and are very difficult to understand. ‘However, these models and the generated selectivity maps accurately reflect intrinsic trends of the reaction,’ she says.

Pérez-Ramírez and his team believe that their approach is scalable. ‘Laser microfabrication processes are already being used industrially,’ he points out. Gu, however, believes the process should be improved before moving forward. ‘It still needs to be more selective towards multi-carbon products,’ she says. A solution could arise from combining copper microprobes with even smaller structures, which could further enhance selectivity. ‘Nanodendrites could be a good solution to give a more controlled environment,’ agrees Gu. ‘This new approach sheds light on how to produce multi-carbon products selectively, putting us one step closer to efficient artificial leaves.’