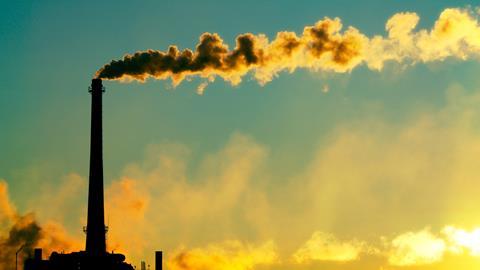 Can catalysis save us from our CO2 problem?

Planet Earth has a carbon dioxide problem. On a daily basis, we hear about CO2 emissions contributing to rising global temperatures and unprecedented climate change. Human activities are pumping an estimated 37.1 billion tonnes of CO2 into the air each year, almost 80% of this coming directly from fossil fuels. While emissions are in decline in some advanced economies, the global trend of increasing emissions shows little sign of slowing – in fact, 2019 is expected to see one of the largest increases in atmospheric CO2 levels since records began . If the situation continues, the chances of meeting the targets in the Paris Agreement will dwindle away to nothing and the spectre of irreversible climate chaos will become a terrifying reality.

Scientists around the world are working on ways to head off this problem – including capturing CO2 produced by humanity’s activities. But once captured, how can we put the CO2 formed as a by-product of so many processes to good use? Some say store it underground, others suggest we should treat it as a valuable resource that shouldn’t be dumped. Companies are already commercialising technologies that convert captured CO2 into construction materials, fertilisers and even plastics. Another proposal is to use the gas directly for enhanced oil recovery, although the green credentials of this option are doubtful.

One increasingly active area of research aims to harness renewable electricity to turn unwanted CO2 into valuable chemicals. Turning CO2 into fuels and feedstocks not only turns a polluting waste product into something useful, but also reduces our reliance on the fossil fuels that generate it in the first place. ‘We’re trying to see, if we start with CO2 as a carbon source rather than a petroleum carbon source, what kind of chemistry we can do and what kind of products we can make,’ says Feng Jiao, who leads a group researching electrochemical devices for carbon utilisation at the University of Delaware.

The process generally works by feeding a concentrated stream of CO2 into an electrolysis cell. The CO2 is reduced on the surface of an electrode and, depending on the number of electrons transferred, a range of molecules can be made. These products are formed in the electrolyte and then fed to a separation system, while the electrolyte and unreacted CO2 are recycled. Common products are carbon monoxide, methane and formic acid. But more complex – and valuable – products like ethanol and even propanol are possible.

Jiao has conducted an in depth analysis of the economics of large scale CO2 electroreduction,1 and last year testified to a US Senate energy committee about the potential of the technology. Key financial considerations are the price of captured CO2, the electrolysers’ materials and their lifespan, product purification and, crucially, the cost of the electricity that drives the process. ‘The electricity cost is really significant, it’s about 70% of the total operation cost,’ notes Jiao. This means that as the cost of electricity from renewable sources continues to fall, electrocatalytic conversion of CO2 becomes a tantalising prospect. Current models suggest that at an electricity price of £0.03/kWh, CO2 electroreduction becomes a competitive way to produce several products more commonly derived from fossil fuel sources. To put this in context, onshore wind projects already produce electricity at a less than £0.05 per kWh, with some consistently below the £0.03 target. 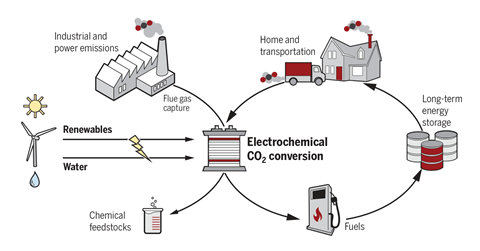 An added benefit of CO2 reduction over, for example, electrolysing water to make hydrogen, is that the liquid hydrocarbon products generated are ready to feed into existing energy and transport infrastructures. Jiao also observes that, while electrolyser technologies are currently used on a small scale in the lab, they are inherently scalable and suitable for CO2 sources, such as power stations or chemical plants. ‘I believe this technology can be implemented in a relatively short period of time,’ he adds.

So can the technology really make a dent in the amounts of CO2 being released globally? Jiao estimates that it would take 1.5 trillion watts – equivalent to around 8% of the world’s total energy output – to convert the CO2 released by the US energy sector alone into the simplest products. ‘Of course, this is a complicated problem – you definitely won’t be able to just take all the electricity and do this conversion, because other places need electricity,’ he says. But Jiao is adamant that the need to stop using fossil fuels, coupled with the growing availability of renewable electricity, will create a unique opportunity for electrochemical systems. ‘But don’t forget, electrochemical CO2 conversion is just part of the pathway to address the CO2 emission issue,’ adds Jiao. He predicts a future where electrocatalytic approaches act as part of a suite of technologies – including thermochemical and biological processes – to tackle our emissions woes. 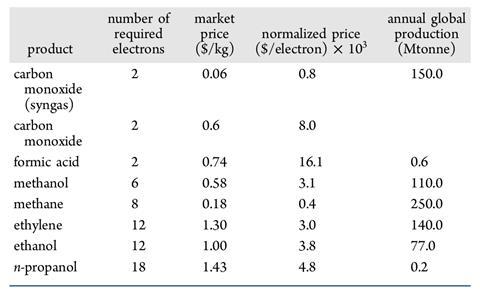 Realising this vision will mean finding solutions to a number of issues. The overpotentials required to drive the process must come down, so that less electricity is needed to reduce the CO2. Increasing the conversion efficiency is also important – transforming more of the CO2 that flows through the system into valuable fuels and feedstocks. These need to be formed at high concentrations with minimal side-products, to lower the costs – both financial and energetic – of separating mixtures. And the products themselves need to be improved – by creating more complex and more valuable chemicals the technology becomes more economical, with a greater return on investment. Recent advances have made strides on all of these goals, strengthening Jiao’s view that this technology will be viable in the near future.

A great deal of work is now going into expanding the kinds of molecules you can make. ‘The most exciting materials for the CO2 electrolysis community are probably copper-based catalysts,’ explains Jiao. ‘That’s because these can make carbon–carbon bonds – so you can make C2 or even C3 compounds.’ Ethylene is particularly attractive as it can be used to make a huge range of compounds, while ethanol and propanol can be used as fuels.

Leading approaches require CO2 to first be reduced to CO, which can then react further. A two-step process seems the most likely way forward for electrolyser technologies. However, one recent report demonstrated a gold and copper tandem catalyst on which gold nanoparticles generate a high concentration of CO, which is then further reduced to alcohols such as ethanol and n-propanol by a surrounding copper foil.2 This system is 100 times more selective for C2 products than single carbon products like methane or methanol.

The surface structure of the catalyst plays a vital role. An electrode comprised of copper nanoparticles on a textured graphene-based film was shown to generate ethanol from CO2 in selectivities as high as 84% and elsewhere, boron-doped copper surfaces have also been show to improve catalyst stability and C2 product generation. Jiao’s group has recently shown that careful selection of the copper surface exposed in 2D nanosheets can suppress the formation of common by-products while generating acetate at high rates and selectivities. 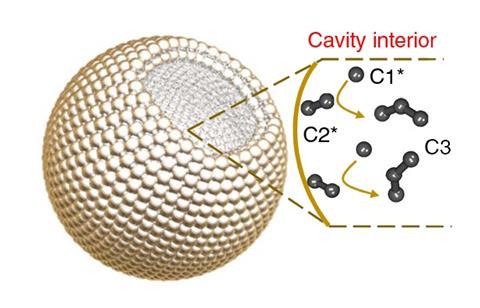 Ted Sargent leads a group at the University of Toronto that has been extensively investigating the roles that defects play in catalyst performance. They recently developed copper particles with specially tailored nanocavities that encourage the formation of propanol.3 The cavities effectively trap C2 intermediates forcing another carbon onto them. The system achieved propanol selectivities significantly higher than other state-of-the-art catalysts. ‘This is a real advance, it’s an impressively high faradaic efficiency for C3 products and it shows a handle, the lever to point CO reduction towards three-carbon products,’ says Sargent. The group has also shown that introducing adparticles – clusters of low-coordinated atoms – onto electrode surfaces can provide similarly impressive results and Sargent believes that further developments will enable the production of C4 and even longer carbon chains in future.

While the ability to make these complex products is a clear advantage, new innovations are also improving the efficiency of electrolyser systems. In particular, gas diffusion electrodes are overcoming issues posed by CO’s low solubility in aqueous electrolytes and enabling higher conversion rates. These electrodes incorporate a porous layer that gas is sent through before reaching the catalyst. Sargent’s group demonstrated a catalyst formed of a 100nm-thick layer of copper deposited on a carbon-based gas diffusion layer that enabled the production of ethylene from CO2 with 70% selectivity.4 Meanwhile, Jiao’s team has used porous electrodes in a system that offers the fastest reported electroreduction of CO to products two carbons long and beyond. However, even in this case only 26% of the total CO entering the cell is converted in a single pass.5

An engineering solution to the conversion problem might already exist. In another recent study, a team led by Stanford University’s Matt Kanan repurposed flow technology used in the fuel cell industry to improve gas diffusion. The team used an interdigitated flow field to force as much gas as possible into the gas diffusion layer of the electrode in a system producing sodium acetate from CO.

‘The first thing we did was really try to maximise the transport of the CO to the catalyst surface and simultaneously the extraction of products from the catalyst back out,’ explains Kanan. ‘And then the second big thing that we did was we played with the interface between the electrode and the rest of the cell to really try to minimise the amount of liquid electrolyte so we could produce concentrated liquid product streams,’ he adds. The system achieves an impressive 68% conversion of the CO entering the cell in a single pass.

Aside from making fuels and feedstocks for everyday processes, these CO2 electrolysers could one day have applications further afield. Kanan’s group are working with Nasa to turn CO2 into food and feedstocks for long term space missions. ‘The crux of our collaboration is that you can engineer microbes to take substrates and produce all sorts of things that are useful for sustaining human life including food and nutrients and vitamins,’ explains Kanan. ‘But for certain reasons you can’t really use photosynthetic organisms, it’s just not efficient enough to use a photoreaction in space.’

To support microbes in these conditions, Kanan’s team propose recycling CO2 breathed out by astronauts. ‘It turns out that if you can make a C2 substrate, particularly acetate, there are a number of microorganisms that can not only grow, but can use acetate as their carbon and energy source for biosynthesis and for making all sorts of useful things,’ says Kanan.

While these advances are promising, there’s still work to be done. A major worry is that most new research only focuses on the efficiencies on the side of the cell where the reduction is taking place. ‘As a community we need to start looking at the overall power conversion efficiency because our techno-economic models all show that you need this to exceed 50% and most of the devices that we’re reporting are in the 20–30% range – and those are the best ones.’ says Sargent. ‘Devising approaches to achieve maximum selectivity in high currents, but in minimum voltage, remain a high priority.’

Showing how the systems can then be engineered on larger scales and demonstrating durability will also be a considerable challenge. Jiao’s economic model considers commercial CO2 reduction systems with lifetimes of 20 years. ‘But in the lab we can barely test one week – so there is a significant gap there,’ he says.

Undoubtedly there are still hurdles to overcome before this technology can be used at scale, but using clean electricity to convert CO2 into fuels and feedstocks that can be quickly integrated with existing infrastructure is an important and attainable goal. The field is attracting major interest from academia, start-ups and government agencies and development over the next few years will be crucial if the technology is to help save us from ourselves.