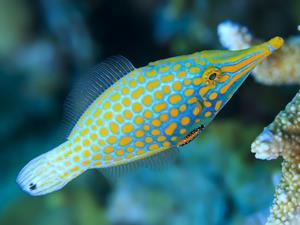 A reef fish can hide from predators by adopting the smell of the coral it eats, according to researchers in Australia. This is the first time that chemical crypsis – the ability of an organism to avoid detection by using odour-based camouflage – has been observed in vertebrates.

It has been known for centuries that animals can visually blend into their environment to hide from predators. But given that vertebrates rely on more than just their sight to find prey, researchers have questioned whether other types of camouflage exist.

‘With the importance of smell for a lot of animals, it makes sense to be chemically camouflaged but there’s very little evidence for it,’ says study author Rohan Brooker formerly from James Cook University, Australia. He goes on to explain that until now caterpillars were the only creature discovered that hid themselves from predators in this way. The caterpillars eat their plant habitat, assume their smell by absorbing certain chemicals in the plant, and become invisible to predatory ants. ‘A [coral-eating fish and coral] system is analogous to the chemical system of the caterpillar,’ explains Brooker. ‘So we thought maybe they were doing a similar sort of thing.’

Brooker and his colleagues looked at the harlequin filefish, a reef-dweller that looks like a coral branch. They wanted to find out if the fish could replicate a reef’s smell through its coral-based diet and whether predators could sniff them out.

The team placed a piece of coral and the filefish at opposite ends of a water tank. A coral-dwelling crab was placed in the centre of the tank and ‘blind-folded’ so it was unable to see which end the coral was at and had to rely on other senses such as smell. The team found that the crab was just as likely to move towards the fish as the coral. ‘[It] suggests that the smell was a pretty good match,’ says Brooker. ‘A lot of them did get confused.’

The group carried out a similar test but replaced the crab with cod, a filefish predator, to see if the coral fish could fool the cod’s acute sense of smell. They found that the cod were less interested in the filefish if they were close to coral they had fed on. If the filefish was close to a coral that was a different species to the one it had eaten or if there was no coral in the tank, the cod became much more active. The team state this is the first evidence of chemical camouflage in a vertebrate but they do not yet know how it achieves this.

Martin Stevens, an ecologist at the University of Exeter, UK, believes the study could have a wide impact on the wildlife community. ‘I think it could be very important in stimulating work looking at chemical camouflage,’ he tells Chemistry World. But Stevens adds that more research will need to be carried out on this system before it can be translated to other vertebrates and mammals. ‘It’s potentially a really exciting and important study,’ he says. ‘The question, I think next, is how does [this chemical camouflage] work and how widespread is it.’