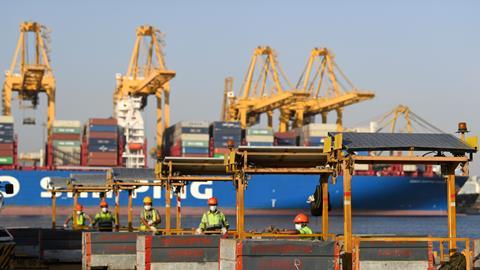 Nowhere was this more prevalent than in China, which dominates the world’s supply of active pharmaceutical ingredients (APIs) and their chemical raw materials. More than 200 of the Fortune Global 500 firms have a presence in Wuhan, the highly industrialised province where the outbreak originated and chemical plants were shut by February.

Globally, the chemical supply chain recorded a sharp decline in outputs leading to shortages of many raw materials and finished products. At the same time, the industry faced oversupply situations as demand for chemicals fell by up to 30% in the hardest hit end markets, such as the automotive, transport and consumer products sectors.

By diversifying the supply … we can become more resilient and sustainable

Covid-19 might well prompt the chemical industry to rethink its global supply chain model to cushion such impacts in the future. In political circles, there are growing calls to rebalance supply chains towards more domestic production. The European Commission in September outlined an action plan to reduce Europe’s dependency on ‘third countries’ (those outside the EU) for critical raw materials. It also added lithium to its list of critical raw materials for the first time.

‘We cannot afford to rely entirely on third countries – for some rare earths, even on just one country,’ said Thierry Breton, commissioner for internal market. ‘By diversifying the supply from third countries and developing the EU’s own capacity for extraction, processing, recycling, refining and separation of rare earths, we can become more resilient and sustainable.’

In the US, outgoing president Donald Trump signed an executive order to expand and strengthen domestic mining and processing capacity for critical minerals.

If there was one winner this year, it was the disinfectant market. Demand for hand sanitisers and surface cleaners soared in light of the pandemic, so much so that industry struggled to keep up. The International Association for Soaps, Detergents and Maintenance Products recorded shortages of active ingredients, packaging materials and ‘unprecedented logistical challenges in moving supplies and products across borders’ from March onwards. 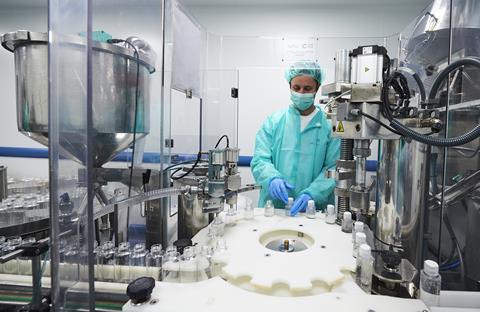 As the crisis took hold, chemical companies pivoted to producing disinfectants to meet global demand. Dow Chemical, for instance, shifted production at five of its plants around the world to produce an estimated 200 tonnes of sanitiser a week, along with the likes of BASF and Ineos. DSM began producing disinfectant at its manufacturing facility in Waalwijk, the Netherlands, which is normally dedicated to producing resins. And Shell diverted its manufacturing plants at Pernis in the Netherlands and Sarnia in Canada to produce isopropyl alcohol. Other, less likely candidates with access to alcohols – such as distilleries and cosmetics companies – joined the disinfectant effort.

For those already devoted to the disinfectant market, sales surged. Reckitt Benckiser, maker of Dettol and Lysol disinfectants, said like-for-like net revenue growth was 12.4% for the year-to-date. Clorox’s sales jumped 27%, the fastest growth in at least two decades. Altogether, the American Cleaning Institute reported a 23% average increase in production volume by manufacturers of cleaning and sanitising products this year.

Vaccines against Covid-19 will likely take some steam out of the market, but producers say our cleaning habits have changed so much this year that demand will remain high. ‘It will, of course, go down from these current peak levels [but] we do believe it will be higher than 2019,’ Sam De Boo, Ecolab’s president for Western Europe told Reuters in November.

Despite the unprecedented demand for disinfectants, medicines and soaps, the chemical industry could not escape the downward pull of 2020.

The European Chemical Industry Council’s (Cefic) November quarterly report found chemical output in the 27 EU member states dropped by 4.4% from January to September 2020, compared to the previous year’s level. Manufacturing output was down 10.6% for the same period. On a global level, chemical output declined by 1.8% in the first three quarters of 2020 compared to the same period of 2019. Chemical exports to non-EU countries were €6.6 billion (£6 billion) below the previous year’s level.

As a consequence of this and the concurrent slump in demand for oil (see below) the sector saw dramatic job cuts. Dow cut 2000 jobs in July; BP is cutting 10,000 jobs worldwide; and Johnson Matthey will cut 2500 positions over the next three years.

Nonetheless, chemical companies ‘came through the global crisis much better than other industries,’ said Christian Kullmann, president of the German Chemical Industry Association (VCI). And expectations are slowly brightening up again. A VCI member survey shows that operational disruptions are decreasing, with relatively few companies struggling with liquidity bottlenecks, and domestic and international demand is picking up slightly.

However, overcoming the Covid-19 crisis will still take some time: only about half of VCI member companies surveyed expect to reach the pre-crisis level again by the end of 2021. Around 20% assume they will need another year, and 13% percent expect to overcome the decline even later or not at all.

‘While we were encouraged to see signs of recovery following the Covid-19 outbreak in May, early signs indicate this recovery is now slowing down,’ said Cefic director general, Marco Mensink. ‘As widely recognised, the second wave of Covid-19 is serious and will likewise impact the chemical business in the coming months.’

In his take on the recovery, Mensink pointed out that the economic struggle underpins the need for rapid approval and implementation of the EU economic recovery plan, which needs to be firmly embedded in the Green Deal agenda. ‘Only this will ensure that the recovery funding achieves an industrial transformation that will be sustainable and contributes to a resilient economy over time,’ he said.

This reflects the mirror image role that sustainability played to the crisis this year. The EU’s Green Deal demands that companies exit the pandemic sustainably. The accompanying chemical strategy for sustainability turned out to be the biggest regulatory upheaval for years, promising fundamental changes to key laws like the EU’s registration, evaluation, authorisation and restriction of chemicals (Reach) regime. 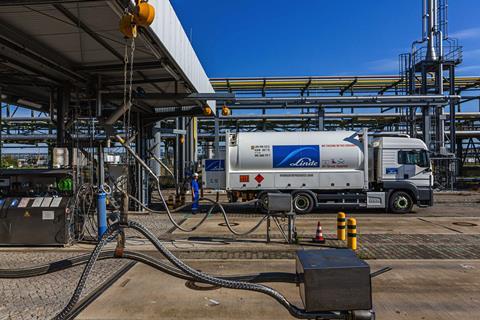 The pandemic has prompted companies and governments to accelerate moves to more sustainable technologies, including hydrogen

Hydrogen is the 2020 poster child of the sustainability movement. The Green Deal envisages a six-fold increase in capacity to produce green hydrogen – made using renewable energy to split water – by 2024. This would be used to decarbonise existing hydrogen production in chemicals and refining where, today, electrolysers produce just 4% of hydrogen demand.

To many industry players, this presents a growth opportunity with strong political backing. Germany, for example, has pledged to invest €7 billion in hydrogen-related businesses. Siemens committed in September to build what it says will be one of the country’s largest hydrogen plants. When it starts up in late 2021, the electrolysis unit at Wunsiedel, based on protein-exchange membranes, will draw 6MW of electricity entirely from renewable sources and produce up to 2000 tonnes of hydrogen per year at full capacity. In November, Ineos and automaker Hyundai Motor agreed to collaborate on public and private sector hydrogen projects. In the same month, Johnson Matthey became the latest member of the growing Hydrogen Taskforce, a coalition of the UK’s largest organisations that operate and innovate across the sector.

At the political level, ambitions are high. Executive vice-president of the European commission, Frans Timmermans repeated his cheer that ‘hydrogen rocks’ during a keynote speech at the European Hydrogen Forum in November. In sectors like chemicals, where further emissions reductions are difficult, ‘hydrogen will be key, and not just in Europe,’ Timmermans said. ‘I believe this has a huge, huge potential to help us realise […] climate neutrality by 2050.’

2020’s plunge in oil prices presented a stark contrast to the sustainability boost. Under the weight of Covid-19, the Brent crude benchmark crashed from around $60 a barrel to below $20/barrel in April, as demand – particularly for fuel – collapsed with society lockdowns. Prices stabilised somewhat amid positive vaccine news in November, with a barrel now costing close to $50 again.

But the year ends on an uncertain future for oil demand. In September, oil company BP became the first industry giant to declare the end of the age of the incessantly increasing demand for oil. Consumption may never return to the level it had reached before the pandemic, according to BP’s ’Energy Outlook 2020’.

According to the company, even the most optimistic estimate for the next two decades sees demand ‘largely stagnating’ as world energy supplies transition away from fossil fuels. In August, BP chief executive Bernard Looney had outlined a $5 billion annual investment in building up the company’s renewable energies business, while reducing oil and gas production by 40% over the next ten years. The new strategy also envisages reducing the group’s net operational carbon dioxide emissions to zero by 2050 at the latest.

Many in the oil industry responded skeptically, suggesting that BP’s forecast is partly intended to help justify its own strategy of accelerating its emissions reductions. The Organization of the Petroleum Exporting Countries’ (Opec) view is that oil demand will continue to expand until 2040. Russian oil giant Rosneft scoffed at BP’s predictions, saying the company is eager to scoop up any market share that European oil majors make available by shifting their investments from oil and gas to renewables.

Either way, the oil market is another source of uncertainty for the chemical industry that will need to be watched closely.

2020 has not been a year for mega-mergers. There were, however, some notable exceptions. BP sold its remaining standalone petrochemicals businesses to Ineos for $5 billion (£4 billion), as part of a reorganisation aimed at meeting the challenge of a transition to cleaner energy. Evonik bought the Porocel Group for $210 million to accelerate growth in its catalysts business. And Covestro agreed to acquire Royal DSM’s resins and functional materials business, adding about €1 billion in annual sales.

However, this relatively slow year could be followed by a mergers and acquisitions boom, fuelled by opportunities for cheap deals. A survey by consulting company Ernst & Young found that 39% of companies worldwide are now hoping for lower ratings of possible takeover candidates.

This would be similar to what happened after the last financial crisis, said Constantin Gall, partner and head of transaction advisory services at Ernst & Young in Germany, Austria and Switzerland: ‘Companies around the world are now watching the market with a particularly keen eye. In the acute phase of the coronavirus crisis, interested buyers will initially hold back. However, we expect that, in view of the falling valuations of takeover candidates, there will be a significant increase,’ he said.