Is Europe at the top of another hydrogen hype cycle that will see enthusiasm translated into real projects to hasten decarbonisation – or will its proponents be disappointed again?

Stimulus packages are giving hydrogen a key role in recovery plans, especially to decarbonise sectors such as chemicals, steel, and heavy transport, where electrification – anticipated as the main route to decarbonisation – may not be an option. It will also create jobs. The International Energy Agency (IEA), estimates new industries such as hydrogen could generate between six and eight jobs for every $1 million invested. 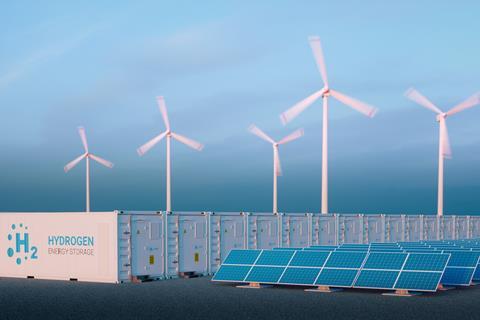 The Netherlands, Germany and Portugal have all set out broad strategies to boost research efforts, and help create demand. The EU sees hydrogen as a key to delivering on its commitment to slash carbon emissions by at least 50% by 2030. It has billions to invest through the Green Deal and a €750 billion (£678 billion) recovery package agreed in July. EU green deal supremo Frans Timmermans declared that ‘Hydrogen rocks’, and appealed for a pipeline of projects the bloc can back.

You need to go as hard as you can, everywhere. We definitely do need [hydrogen]

The EU’s strategy envisages a six-fold increase in capacity to produce green hydrogen – made using renewable energy to split water into its constituent elements – by 2024. This would be used to decarbonise existing hydrogen production in chemicals and refining where, today, electrolysers produce just 4% of hydrogen demand. A further scale up to at least 40GW of electrolysers capable of making 10 million tonnes of hydrogen a year by 2030, anticipates its use in steel production, trains and shipping. By this stage, green hydrogen is expected to become cost-competitive with other forms of hydrogen production from fossil fuels. All this could require up to €340 billion for 80–120GW of wind and solar generation, while hundreds of millions more will be needed for hydrogen transport and storage infrastructure (although some existing gas pipelines could be converted), and to convert end-of-life steel mills.

The EU is also eyeing the prospect of hydrogen being produced by cheap solar power in Africa – at the same time spurring that continent’s energy transition. Ultimately it envisages hydrogen providing 13–14% of Europe’s energy mix by 2050.

‘Around $150 (£114) billion in cumulative subsidies and $300 billion in total investment would be required to scale the hydrogen industry up to 2030, and achieve the milestone of delivered costs of $2/kg,’ says Kobad Bhavnagri, global head of industry and building decarbonisation at BloombergNEF. ‘There are now signs that this level of subsidy and investment could be met, or even exceeded.’ While many other governments have developed hydrogen strategies, he adds, they do not yet include investment mechanisms. ‘However, with the EU taking a clear lead, this could now change.’

In the UK, ‘the problem has been for the last decade or more, that hydrogen has always been a nice option to have there in the background, maybe plan B or plan C,’ suggests David Joffe, head of carbon budgets at the Committee on Climate Change (CCC). ‘Nothing actually gets done, and it never becomes a plan A.’ The commitment to net zero by 2050 has also focused minds: ‘everyone realises that you need to go as hard as you can, everywhere. And it also brings clarity to the role of hydrogen, that we definitely do need it’.

From paper to pasta making – pilots are underway to demonstrate the power of hydrogen; big investments are planned in wind and solar capacity. Last month Iberdrola announced a €150 million project to develop a 100MW solar plant to power green hydrogen producton for Spanish fertiliser maker Fertiberia. The plant will be operational next year. 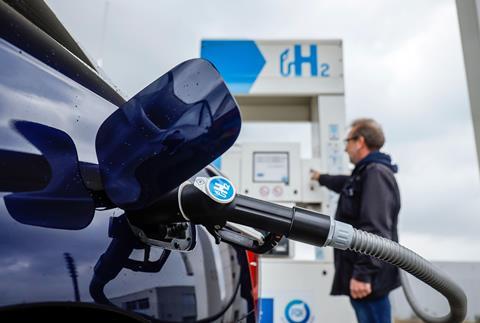 While hydrogen powered cars are seen as a novelty and unlikely to compete with electric vehicles in the short term, some trains and other parts of the transport network could be hydrogen fuelled

Mike Parr, director at energy consultants PWR and a green hydrogen lobbyist, thinks the EU strategy leaves too much to be done after 2030. Its renewables target ‘is not very ambitious given how quickly renewable build-out can be done…….and its [hydrogen] strategy seems to be based on today’s technologies.’ He anticipates the siting of electrolysers within offshore wind turbines, for example.

Across the UK and continental Europe, port authorities are teaming up with industrial users and producers to create green hydrogen clusters where demand and supply can meet: for example, to help decarbonise the Phillips 66 refinery on the Humber, or Tata Steel’s Ijmuiden site in the Netherlands. Together with Nouryon and the Port of Amsterdam, it is planning a 100MW hydrogen facility there, producing up to 15,000 tonnes of hydrogen each year – and expected to be operating in 2024. This is a stepping stone to cutting emissions by 30% by 2030, and one of a mix of new technologies (including redesigning processes to use 20% less energy) that aim to make it a climate neutral steelmaker in 2050. However ‘It is no easy task to run the steel sector on hydrogen … it is important that the infrastructure gets going and we want to learn from it. We think the turning point will be around 2040,’ sustainability director Annemarie Manger, tells Chemistry World.

To run on green hydrogen, the steel plant will ultimately need 6GW of wind capacity – today the world’s largest offshore wind farm (off the Yorkshire coast) has a capacity of 1.2 GW. Until enough renewable energy is available, Tata Steel sees carbon capture (utilisation) and storage (CC(U)S) supporting a transition from natural gas. It has joined another consortium aiming to develop the infrastructure to transport and store carbon dioxide under the North Sea.

Today, most hydrogen is made from fossil fuels, mostly by steam reformation of methane (SMR). If combined with CC(U)S, hydrogen made this way is referred to as blue hydrogen. The EU expects around €11 billion will be needed to retrofit existing hydrogen production with CC(U)S. While blue hydrogen is unpopular with environmental groups, both Shell and BP predict continued demand for gas. Last month Norwegian energy company Equinor committed to investing in a major facility to make hydrogen from natural gas at Saltend on the Humber. It will be combined with CCS, enabling industrial users to avoid 900,000 tonnes of carbon dioxide emissions a year.

Blue hydrogen [from fossil sources] will be key if we want move quickly. You’re piggybacking on existing infrastructure, so you don’t have to build it all

Johnson Matthey has developed a more efficient process, pairing a gas-heated reformer with an autothermal reformer and using oxygen to produce carbon monoxide and hydrogen. Higher temperatures mean more hydrogen and less carbon dioxide is produced per unit of methane. The carbon dioxide produced during the reaction is at high pressure and high concentration, so it is more efficient and less expensive to capture, explains Eugene McKenna, business development and innovation director. Over 95% carbon dioxide can be captured. Johnson Matthey’s system is at the heart of proposals from the HyNet consortium, to decarbonise an industrial cluster in the north west of England, fed by hydrogen production at Essar Oil’s Stanlow refinery.

‘Blue hydrogen will be key if we want move quickly,’ McKenna argues. ‘You’re piggybacking on existing infrastructure, so you don’t have to build it all. You can put the hydrogen production facilities in an existing brownfield oil refinery which is the end of a gas pipe; you can put that hydrogen into domestic supply; there are lots of high energy industrial users nearby; there’s transport infrastructure, and you’ve got a depleted gas field ready to take the carbon dioxide at the other end. It looks like a really good opportunity to prove the technology and perhaps to be the first in the world to deploy the technology.’

But he stresses that both blue and green hydrogen will be necessary. ‘There will be some locations where you might go green and others where you want to go blue. I think what we should be focused on is the net result, which is the lowest possible greenhouse gas emissions at the end of the process, while supplying energy in the format that we need it.’

However, Bhavnagri expects that the market dynamics, and eventually the costs, will mean renewable hydrogen dominates. ‘I just don’t think there is much of a market for hydrogen CCS projects in the next 10 years. And after 10 years, renewable hydrogen will have become cheaper.’

The Hynet consortium also has government funding for hydrogen pilot studies at Pilkington’s glass making facility at St Helens and Unilever’s Port Sunlight plant, which makes home and personal care products. If successful, the Unilever demonstration could provide the impetus to decarbonise chunks of the chemicals, automotive and food and drink sectors that currently use high pressure steam, potentially avoiding up to 20 million tonnes of carbon emissions annually – or about 25% of the UK’s industrial emissions.

‘We think industrial clusters are a really good place to start building out that carbon dioxide and hydrogen infrastructure and create that option,’ says Joffe. In its latest report to parliament, the CCC urged the government to aim for large-scale trials to begin early this decade. The timing is key: ‘if you start doing the industrial clusters in 2040, you probably miss most of the opportunity to open up the hydrogen option to the transport sector or the building sector or whatever. If you do them in 2025, you’ve got much more of an opportunity.’

Whether, or how big a role hydrogen will play in replacing the natural gas distribution infrastructure isn’t clear. A precipitous reduction in the cost of renewables means electrification is now the main contender. To get buildings to zero emissions, decisions need to be taken by the middle of the decade.

In industry, the answer may be different suggests Joffe: ‘I think there’s a range there and it’s going to be quite site specific, depending on what the processes are; whether there’s local hydrogen available; whether you need to upgrade the electricity grid to allow the electrification alternative and so on. We’re not thinking about hydrogen as a one size fits all thing,’ he stresses.

Moving from demonstration scale to broad implementation will requireboth financial and political investment. ‘The technology’s there, the partners who want it to be successful are there … but the crunch point will be what does that business model look like? And will people will put their money into building it?’ says McKenna.

Both Hynet and Equinor’s plans depend on backing from the UK government. Whether blue or green, hydrogen will need support. ‘We really do need to translate the enthusiasm that’s around now into projects, but then also enduring policy mechanisms to actually make the economics work,’ says Joffe.

Both the UK government and the EU are looking at subsidies in the form of Contracts for Difference, a mechanism that’s been used to support renewables by paying the difference between them and electricity generated by fossil fuels for a fixed time, or by paying the difference in carbon dioxide price compared to the price in the emissions trading system. The EU is also looking at border carbon adjustments that could help protect energy intensive industries like steel from cheaper imports from countries with less tough climate change policies. A third option is standards to create demand for low carbon alternatives, such as steel. Joffe points out that we’ll need low carbon steel for offshore wind turbines – in itself boosting demand for hydrogen.

Given the commitments to reach net zero and the time available, it’s clear those decisions are going to have to be taken sooner rather than later.