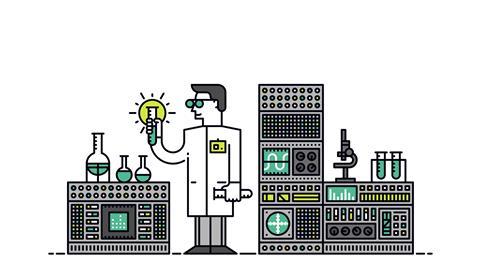 A survey carried out by Reaxys, Elsevier’s web-based chemical data retrieval tool, suggests that chemistry has an innovation problem when compared with other disciplines, and that this may be harming its ability to attract and retain talented scientists.

Reaxys polled 186 chemists from across academia and industry, 78% of whom said they thought potential chemists chose to go into other sciences because the research seemed more ‘newsworthy’. Just over three-quarters of the survey respondents said there is a long-standing or growing problem in terms of attracting new talent to the subject, and 80% said innovation was being held back by an overemphasis placed on applied research.

‘A huge number of the researchers [we asked] are feeling stifled because they feel their science is being directed objectively for a goal […] there is a relentless focus on applications,’ says Elsevier’s Tim Hoctor. He says the survey was carried out because ‘it’s always been important to stay current with what is perceived in the field’. He adds that he was ‘not necessarily surprised’ by the survey responses because they echoed trends that Reaxys had identified previously.

‘It almost looks as though chemistry is at a point where it needs to acknowledge it must change,’ he says. ‘We see that 80% of chemists [we asked] are to some extent dissatisfied with the direction they feel they’re being pointed towards in their research. Almost 80% of the chemists [we asked] believe that there are other fields that are more newsworthy, and the majority of respondents think it will be difficult to attract people continuing in chemistry in the long term future.’

To address these ‘image problems’, he says, chemists need to focus on highlighting the ways in which research is cutting-edge and innovative in order to draw more people into the field. ‘There needs to be a change of recognition in what a chemist is and does. Fifty years ago chemists were seen in a wet lab over a burner. The chemists of today are technology first,’ he says.

He adds that this was recognised in the survey, with 84% of participants acknowledging that being ‘technologically savvy’ – requiring computational or data analysis skills – was crucial or very important for career progression.

Lee Cronin from Glasgow University in the UK, who has long championed the adoption of new digital technologies in chemistry, says the idea that chemists aren’t innovating is ‘nonsense’. ‘It’s just that a lot of people don’t understand what innovation in chemistry looks like today,’ he says. ‘It’s really a very sophisticated subject and communicating that innovation to people is hard.’

‘People should be reminded that chemistry does cure disease, keep the world fed and provides us with an increasingly clean environment… There is a way to communicate that better and a way to collaborate better and that’s what I think digital tools may give. And those digital tools will then address the misconceptions that chemists aren’t trained or tech-savvy enough.’