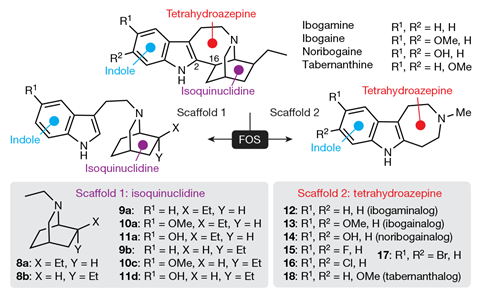 US chemists have modified the active substance in a sometimes deadly traditional African medicine to make a safer potential treatment for addiction. Ibogaine, an alkaloid from the iboga tree, gives users visions and can cause heart attacks – but has also been reported as useful in overcoming addiction. Now, a team led by David Olson from University of California, Davis, have used medicinal chemistry to develop a compound that they call tabernanthalog that suppresses unwanted effects.

‘Our paper demonstrates that you don’t need to have hallucinations in order to have a positive therapeutic effect,’ says UC Davis graduate student Lindsay Cameron. ‘This is a good start in the right direction for developing novel therapeutics that retain the fast-acting antidepressant and anti-addictive properties.’

Olson’s lab specialises in developing compounds that promote neuron growth in the brain. This is a relatively new target for drug developers, and seems to be how ketamine works as an antidepressant and addiction treatment. The exact biochemical pathways involved are not yet known, Olson says. ‘Ketamine’s effects on neural plasticity were not well known until 2010,’ he tells Chemistry World. ‘It wasn’t until 2018 that our group demonstrated that psychedelics produce similar effects on neuronal structure.’

Ibogaine’s harmful effects come because it affects other biological systems. It is potentially lethal because its fatty structure helps it block hERG potassium ion channels that enable signalling to coordinate the beating of our heart cells, triggering heart attacks. Olson’s team therefore made many variations on ibogaine’s structure, which they call ibogalogs, seeking to prevent this. In one group of ibogalogs they removed a fused isoquinuclidine ring. That made the resulting compound, which they called ibogainalog, less fatty. It therefore blocked hERG channels with one-tenth the potency of ibogaine in their tests.

The visions come because ibogaine’s structure activates type 2A serotonin receptors in our neurons like another hallucinogen, 5-methoxy-N,N-dimethyltryptamine (5-MeO-DMT). Researchers had previously found that rats trained to respond to hallucinogens could identify 5-MeO-DMT, but not closely related 6-MeO-DMT. Olson’s team therefore made a similar change in the position of a methoxy group in ibogainalog, producing tabernanthalog.

In tests in mice, hallucinogenic drugs normally make mice twitch their heads. ‘Even high doses of tabernanthalog do not induce a head-twitch response,’ comments Olson. ‘So we can be very confident that tabernanthalog will not produce LSD- or psilocybin-like subjective effects in humans.’ Tabernanthalog also blocked hERG channels with one-hundredth the potency of ibogaine.

Richard Foster from the University of Leeds says that tabernanthalog ‘offers exciting potential as a therapeutic for the treatment of addictive disorders’. ‘Although the lead compound is not yet available for human use, the research provides a powerful case for pursuing this new class of therapeutic,’ he adds.

Olson has co-founded a company called Delix Therapeutics to now go through the steps needed to commercialise such compounds. ‘Our work is a significant step towards developing a drug inspired by the structure of a psychedelic compound that is safe enough to store in your medicine cabinet, just like you would aspirin,’ he adds.