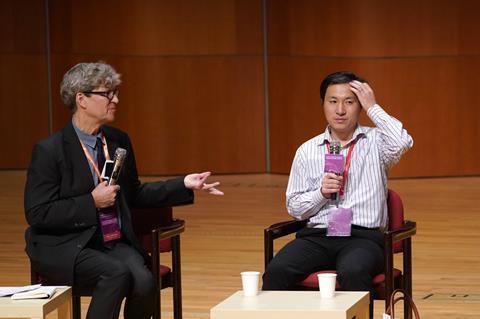 He Jiankui, the Chinese geneticist who created the gene-edited twins, defended his work at the Second International Summit on Human Genome Editing in November 2018

The mutation that was controversially edited into twin babies has significantly increased the likelihood that they will die prematurely. The editing of the embryos prior to their implantation by rogue Chinese geneticist He Jiankui was ostensibly done to protect them from HIV, but an analysis has found that this mutation comes with an increased risk of other infectious diseases.

The Chinese geneticist used the Crispr gene-editing system to disable the protein CCR5, which is found on the surface of immune cells. HIV makes use of it to infect cells. There was already some evidence that a natural CCR5 gene mutation left people more susceptible to viruses such as influenza and West Nile virus.

Now, research indicates that people who harbour two mutated copies of the CCR5 gene are 21% more likely to die before the age of 76 than those without them. This was of the conclusion of Xinzhu Wei and Rasmus Nielsen at the University of California, Berkeley, who investigated the mutation using the UK Biobank – a public database with the genomes and death registry information of more than 400,000 British people.

Nielsen describes the mutation as one of humanity’s most famous, since it protects against some strains of HIV. ‘But also because it seems to have arisen relatively recently to a relatively high frequency in northern Europeans,’ he explains. It is presumed to have conferred some protection against an infectious disease, possibly the bubonic plague.

The researchers also discovered that around 11% of those on the database harboured one mutated copy of the CCR5 gene. Evolutionary theory predicts that the square root of this figure should reveal the number of people with two mutated copies, but there were fewer than predicted enrolled in the biobank. ‘Somehow people who had two copies of the mutation are missing from the database, likely because they had died before they could enrol,’ Nielsen explains. ‘We didn’t see any reduction in fitness from having one mutated copy.’ However, Nielsen points out that there is a wide margin of error in their results, meaning that the increased mortality rate could be far lower or higher that the 21% estimate.

Nielsen says that people with both CCR5 copies deleted ‘can live a fine good life’, adding ‘I don’t think any kind of intervention is needed for people with this mutation’. Nonetheless, Nielsen says that if he had two copies of the mutation he would ensure he received regular flu vaccinations.

Nielsen notes that He’s experiments carry a high risk of off-target effects. He says this new study shows how ‘it is very difficult to predict the effect of a mutation. One mutation can have many different effects.’

‘This makes a terrible experiment even worse,’ says Julian Savulescu, a bioethicist at the University of Oxford, UK. ‘We already knew it exposed normal children to the risk of off-target effects. This just stacks on another risk.’ He is not in favour of recent calls for a moratorium on gene-editing, however, and instead supports setting out a translational pathway. An international commission was recently announced that will develop a framework for germline editing. ‘I have suggested that you start with embryos with catastrophic lethal conditions. An example might be Tay-Sachs disease,’ he explains.