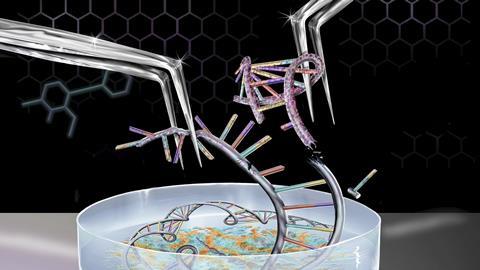 An enhanced Crispr gene-editing technique has been developed that can introduce as many as 25 different regulatory changes or alteration to a gene simultaneously.

Originally identified as a primitive immune response in bacteria, the Crispr system is now a popular tool for targeted gene-editing in mammalian cells. The technique involves introducing plasmids that code for the different Crispr components into a target cell, including sequences for Cas proteins and gRNAs, which direct the proteins to the correct genes. By doing so, researchers have been able to perform highly targeted gene knockout, gene activation and gene repression with minimal off-target effects.

Previously, however, Cas proteins and gRNAs have needed to be encoded on separate transcripts before being introduced to the target cells, limiting our ability to target multiple genes simultaneously. Now, a team of researchers have shown that by employing a tertiary structural motif, it is possible to stabilise an RNA transcript encoding both a Cas12a protein and up to 25 individual gRNA sequences in a single plasmid. The novel structure also encouraged Cas12a production and improved gRNA processing.

As mammalian transcripts have an average length of 13.5kb, the team has theorised that it may be possible to employ hundreds or even thousands of gRNAs in parallel using single plasmids. They do acknowledge, however, that as the transcripts increase in length, the challenges involved in synthesising and cloning them would become more significant.

This new approach to encoding Crispr components has both advantages and disadvantages when compared with more traditional techniques. One of the most important distinctions is that when Cas proteins and gRNAs are introduced separately, they are expressed by different promoters. Contrastingly, when they are both part of the same plasmid, both components are expressed by a single promoter and therefore have a fixed ratio to one another. This enables much tighter control of expression, but may also result in a fixed ratio that isn’t optimised for the situation in question, resulting in poorer activity.

Such issues may be overcome by increasing plasmid concentration or by encoding multiple gRNAs per target gene, but this has not been confirmed.