In recent years, Crispr-Cas9 gene editing has made many headlines, with stories about its ability to make precise gene edits alongside tales of hotly contested patent battles. But the field is now moving on, with a multitude of start-up companies looking to use Crispr’s ‘molecular scissors’ to make commercial products.

Unsurprisingly, much of the interest is in pharmaceuticals ­– particularly aimed at cancer, immunology and rare diseases. It offers the lure of cures, either by engineering isolated cells before returning them to the body, or by editing cells inside the body. 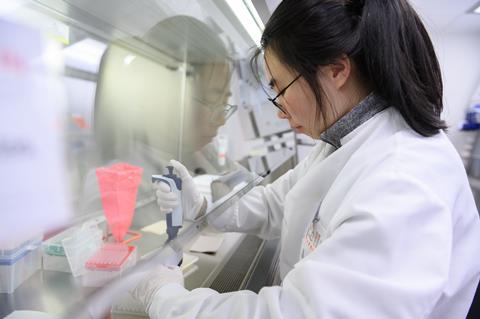 Most Crispr companies are looking at pharmaceutical applications, but the technology has much broader potential

A handful of projects have already entered the clinic. These include a treatment for beta-thalassaemia from Crispr Therapeutics and Vertex that involves editing haematopoietic stem cells from the patient before returning them to their body. Another, a treatment from Editas and Allergan for Leber congenital amaurosis, which causes infant blindness, involves injecting the Crispr-Cas9 editing machinery directly into the eye. 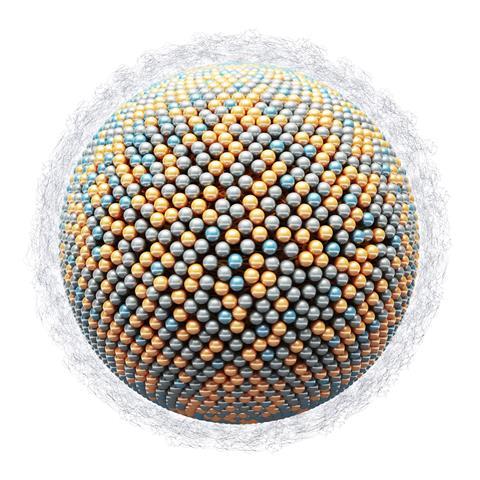 A further company, Intellia, hopes to initiate human trials later this year. It’s working on both cell transfer and direct injection approaches. According to chief scientific officer Laura Sepp-Lorenzino, it will be the first to test systemic administration of the Crispr-Cas9 machinery. ‘We are going to give an intravenous infusion of a lipid nanoparticle [LNP] formulation,’ she says. Once it reaches the liver, it will edit disease-causing genes in the hepatocytes.

Intellia’s furthest advanced in vivo project is in the rare disease transthyretin amyloidosis. Mutated TTR protein misfolds and is deposited in multiple tissues, causing heart problems and nerve degeneration. There is already clinical proof that stopping TTR mutations is beneficial: both Ionis and Alnylam have developed oligonucleotides that knock down its expression by interfering with the messenger RNA during protein production.

‘We have shown in multiple primates that a single dose of the LNP carrying this gene-editing machinery can give a dose-dependent knockdown of TTR levels,’ Sepp-Lorenzino said. ‘The key differentiator is that patients need to take the RNA knockdown drugs forever. We edit in the liver, and that edit is permanent – the cells no longer make TTR.’

Intellia’s platform approach will allow it to target a multitude of diseases caused by faulty genes in the hepatocytes. ‘Once we have validated the platform, it can be applied over and over again,’ she says. Next up in the pipeline is hereditary angioedema.

As well as knocking out genes, Crispr could be used to insert new ones. Intellia is working with Regeneron to insert the gene for blood clotting agent Factor IX to treat haemophilia, for example. The firm has also been working with Novartis to edit haematopoietic cells to treat sickle cell disease, and has an in-house programme developing T-cell receptor therapies for cancer. ‘We can manipulate cells with multiple knock-outs and insertions to give a homogeneous, healthy T-cell product,’ she says. Importantly, this could lead to an off-the-shelf therapy rather than having to harvest individual patient cells.

In contrast to Intellia’s platform approach, Verve is focusing closely on a single condition: heart disease. ‘Right now, coronary heart disease is treated with daily pills or multiple injections,’ says chief executive Sekar Kathiresan. ‘We are looking to transform care to a once-and-done model: a single treatment that would lead to permanent lowering of blood cholesterol and triglycerides.’ 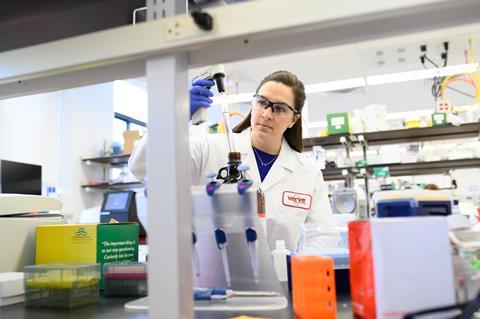 Some people have mutations that naturally turn off a cholesterol-raising gene in the liver. Their levels of harmful low-density lipoprotein (LDL) cholesterol and triglycerides are very low, and they never have heart attacks. ‘Could we develop a medicine that mimics these natural protective mutations?’ he says. Turning off any one of eight genes they have identified leads to very low levels of cholesterol and triglycerides. ‘Our goal is to turn off one of these genes in the liver in adults with a one-off gene editing treatment,’ he says.

Again, the drug product is the Crispr gene editing material packaged in a carrier, which homes in on the liver after injection. The changes should be permanent, and the team has already shown it is durable in animal models. ‘The expectation is that it would also be durable in humans,’ he says.

The project is still in the preclinical stage, and Kathiresan expects to enter first-in-human trials within the next three to five years. ‘There is a group of patients who have sky-high cholesterol levels starting early in life,’ he says. ‘If efficacy and safety could be shown in that group, we could then expand to other populations.’

Both Sepp-Lorenzino and Kathiresan believe Crispr-Cas9 holds great promise for a range of diseases. While the initial focus was on ex vivo approaches because of delivery issues, Kathiresan says, the potential of in vivo editing is huge, as long as the tissue can be targeted. ‘The two tissues people are focused on are the eye, because it’s directly accessible as you can inject into the eye, and the liver, because if you inject into the bloodstream, most of what you inject you can direct there,’ he says. For most other organs, it’s more challenging, although directing inhaled products to the lung may also have potential.

In ethical terms, Kathiresan adds, it’s not really any different to any other drug treatment: no changes are being made to the germ line genome. ‘That is an important distinction. The changes we make to that person will not be passed on to their children; it is to that individual alone,’ he says.

Of course, Crispr gene editing holds a huge amount of promise away from the pharmaceutical field. A very different medical application is being developed by eGenesis: editing pigs’ genes so their organs can be transplanted safely into humans. ‘The advent of Crispr allowed us to address some of the significant hurdles in the field, and the multiplexing capabilities of Crispr opened up the door,’ says Wes Westlin, executive vice-president of R&D at the company. 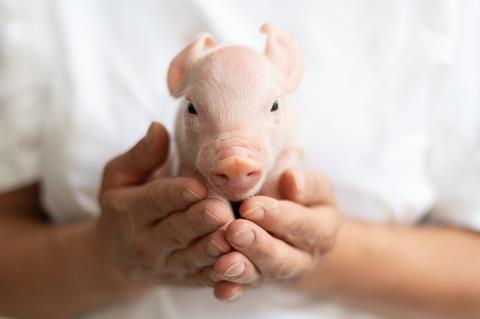 The initial focus is on kidney transplants, although eGenesis is also working on pancreatic islets, and there is potential in liver, heart and neuronal cell transplant, too. ‘In the US, there are close to 100,000 people waiting for a kidney transplant, yet only about 20,000 receive an organ each year,’ he says. ‘If an alternative supply could be designed, that would solve a huge problem.’

It’s not the first time xenotransplantation has been tried: clinical work a couple of decades stopped because of concerns about endogenous retrovirus sequences in the pig genome. Crispr can inactivate all these retroviral sequences so they cannot be transmitted to humans.

But this was not the only problem. In the original studies, Westlin says, there was little concern about rejection, primarily because they were doing neuronal cell transplants and thought it was unlikely to be a problem. ‘With organs like kidneys and pancreatic islets, we have to pay attention to all the systems that recognise pig as foreign and lead to rejection,’ he says. Making the organs more ‘human’ should fix this.

Crispr allows precise edits to be made but, importantly, it can be used to make multiple changes, allowing both retroviruses and rejection to be addressed together. First, DNA in pig cells is edited. The cells are grown, and sequenced to identify single cells with the desired modifications. ‘We then take that DNA and clone a pig using the technology that cloned Dolly the sheep,’ he says. ‘We have engineered hundreds of pigs, and done transplant studies and clinical studies in translational models. We are gearing up with the final construct that would be clinically ready, and those are in production today.’

He anticipates clinical studies could start in the next two or three years. ‘It takes about half a year to create pigs of an age that can be used for transplant, and we then need to evaluate those in the translational model, which takes 3–12 months,’ he says. ‘While we are in the Covid crisis, those pigs are gestating. We are very excited about the data we have to date.’

Crispr has huge potential in the food market, too. ‘We want to try and make it easier for people to make the choice to eat healthily,’ says Tom Adams, chief executive of Pairwise. ‘By helping to create fruit and vegetables that take out some of the barriers that people have to eating them, we think we can have a big impact on society.’ 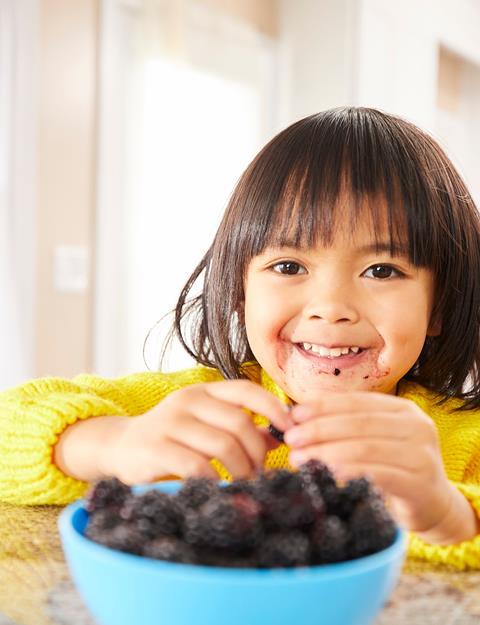 Black raspberries have fallen out of favour because of disease susceptibility, but accelerated trait selection using Crispr could create more commercially viable varieties

Easy-peel seedless mandarins are now dominant in the market because they are easy to eat, so what about, say, a cherry without a stone? ‘There is a mutation in plums that makes plums without pits, but it would take about 150 years to get a cherry without a pit by crossing them,’ Adams says. ‘But we know the genetics underneath it. Crispr technology is well suited to these kinds of crops because we understand the genetics.’

Most genetically modified crops are created by inserting genes from another organism. In contrast, according to head of product discovery Ryan Rapp, Crispr allows specific beneficial traits from individual plants to be selected. Crispr is being used to, effectively, speed up the traditional breeding process – which normally takes decades to achieve – where plants with different traits are crossed to create new varieties, taking advantage of natural diversity.

As Rapp explains, Crispr tools have largely been developed with human therapeutics in mind. ‘It’s not a given that they will work in a plant species, and we spend a lot of time getting it working,’ he explains. For medicines, the idea is to target specific changes, whereas for plant breeding, introducing diversity is beneficial.

Recent advances in genomics and phenotyping helped the company target those beneficial changes. ‘We do a lot of 3D modelling of the different proteins, and how changes to how they interact will increase or decrease their activity in the pathway they’re involved in,’ he says. As plants are totipotent (meaning any cell can be grown into a new plant), individual cells can be edited, and used to generate new plants.

The closest product to market is a leafy green plant without a flavour that makes some people dislike the taste. The enzyme that creates this molecule has been removed.

Another project is on rubus, the genus that includes blackberries and raspberries. ‘The black raspberry was dominant in north America in the 1800s, but it was never domesticated, and fell out of favour because of virus problems,’ Rapp says. Crispr offers the prospect of creating a strain that can be grown in an agricultural setting. ‘Black raspberries have more antioxidants than many other fruit and veg, including blueberries. We could bring consumers something new and healthy.’