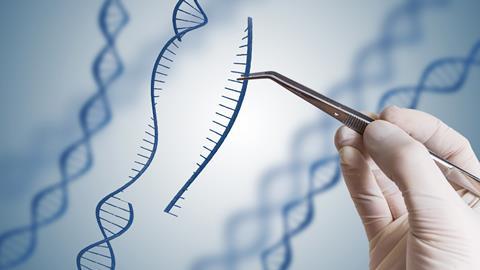 Prominent scientists are calling for a global moratorium on germline editing to create genetically modified children. Writing in Nature, they argue for a five-year pause on all clinical uses of editing of reproductive cells.

They write that this is needed because germline editing is not yet safe or effective for patients, and the risk of introducing unintended mutations is unacceptably high. The opinion piece, with 18 signatories including two of the pioneers of the Crispr gene-editing system, describes any attempt to reshape the species on the basis of current knowledge as ‘hubris’. It criticises the editing of human embryos by Chinese scientist He Jiankui, whose actions raised fears of a regulatory backlash.

The authors note that scientists who were apparently aware of this work did not stop it, and also that there has been a growing interest in genetic enhancement of humans. Meanwhile, there is no mechanism to discuss whether or when clinical germline editing might be appropriate.

Governments, they suggest, should declare that they will not permit any clinical use of human germline editing for an initial period of five years. A nation could subsequently allow a particular application, but only after they provide two years of notice and engage in international discussions.

They write that there should be ‘broad societal consensus in the nation on whether to proceed with human germline editing at all’. The framework should be backed by a coordinating body, perhaps organised under the World Health Organization (WHO).

The WHO has already established an expert advisory committee on human genome editing. It aims to make recommendations on appropriate governance mechanisms. The first meeting takes place in Geneva, Switzerland, next week.

This call for a moratorium ‘demonstrates progress towards an international consensus that heritable human genome editing is not only an important issue with profound implications for us all, but that it also demands globally coordinated agreement’, comments Jackie Leach Scully, a bioethicist at Newcastle University, UK. She says past scientific moratoria have been successful, though it’s essential they are agreed by a global majority.

‘Even if individual scientists or states don’t agree with a moratorium on ethical grounds, they need to have a clear sense that the penalties for not keeping them outweigh any advantages,’ Leach Scully adds. She is dubious, however, about the call for a broad societal consensus due to ‘the practical difficulties of designing, carrying out and evaluating anything that might be called “societal debate”’.

Ethicist Hille Haker at Loyola University Chicago says it is naïve to think people won’t replicate He’s work again. She believes the goal of public consensus is unattainable and criticises the article for presupposing ‘that gene-editing for therapy is ethically sound and [that] enhancement may be’. This, she says, is the contested question. ‘I am for a ban – for ethical reasons – and therefore think it must be done by a treaty.’

‘He Jiankui, in carrying out this work, already showed himself willing to bend or break existing national regulations, to ignore numerous ethical statements and to fly in the face of strongly expressed scientific and ethical opinion,’ adds Sarah Chan, a bioethicist at the University of Edinburgh, UK. Though the statement from the International Summit on Human Gene Editing in 2015 is described in the article as inadequate, Chan questions whether a moratorium would have been any more effective.