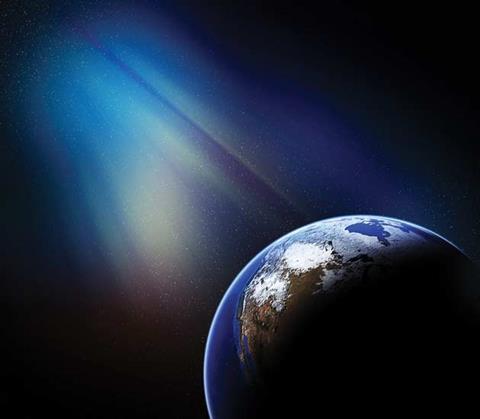 The reason nature favours one mirror image of a molecule, such as DNA, over another may rest with polarised cosmic radiation

The breakup of 3-bromocamphor molecules bombarded by polarised electrons has given a tantalising hint of the origins of biological homochirality – nature’s preference for one mirror image of a molecule over another. And the reason that life favours either left- or right-handed molecules may be thanks to the radiation from the stars that the early Earth was bathed in.

Biological molecules, such as amino acids and sugars, are often chiral. This means they exist as enantiomers, or mirror images, that cannot be superimposed – just like a person’s right and left hand. In nature, amino acids and sugars exist exclusively as only one enantiomer and not the other. Understanding the reason for this preference is key in unlocking the secrets behind the beginning of life.

‘Why is everyone’s DNA right-handed?’ asks Tim Gay from the University of Nebraska–Lincoln, US. Two theories have been proposed in answer to this question. The first idea is that homochirality came to Earth from space on the back of a comet and the second is a theory known as the Vester–Ulbricht hypothesis that rests on the fact that just as molecules can have left- and right-handed versions, an electron’s spin also has left- and right-handed states. The Vester–Ulbricht hypothesis suggests that polarised radiation from left-handed electrons preferentially destroys left-handed DNA precursors, leaving only right-handed molecules to develop into the building blocks of life. Though popular among some scientists, no evidence has ever been found to prove this hypothesis. ‘We now know that the Vester–Ulbricht hypothesis, in the form where it says the incident electron is responsible for the breakup reaction, can happen,’ says Gay. ‘We validated that idea.’ He emphasises, though, that this experiment has provided no evidence that the Vester–Ulbricht process occurred, just that it is physically possible for the process to happen.

Together with colleague Joan Dreiling, the team produced beta radiation by shining laser light at a crystal of gallium arsenide. Alternately left- and right-handed electrons were produced and focused onto a gaseous sample of 3-bromocamphor, a chiral organic molecule. They found that left-handed electrons preferentially destroyed left-handed bromocamphor and vice versa, resulting in an asymmetry in the reaction. ‘The size of the asymmetry we are measuring is very, very small,’ explains Drieling. In the experiment, the largest asymmetry measured was of the order 3 x10-4. ‘To put it in perspective, you can think about it in terms of flipping coins,’ Drieling says. ‘If you repeatedly flip 20,000 coins, 10,003 would need to come out as heads and 9997 as tails in order to get an asymmetry of 3 x10-4.’ The pair describes searching for this tiny effect as like looking for an electronic needle in a haystack.

‘The experimental results of Dreiling and Gay are promising because the chiral 3-bromocamphor that was subjected to chiral electrons dissociated in a slightly asymmetric manner,’ says Uwe Meierhenrich from the University of Nice Sophia Antipolis, France, who studies the origins of biomolecular asymmetry and was involved in the recent Rosetta space probe mission. ‘If such a concept could be experimentally transferred to interstellar conditions and by using chiral molecules considered relevant for the origin of life – such as amino acids – then this would be a scientific breakthrough.’