59 years after its discovery, the Ugi reaction becomes enantioselective with the help of a chiral phosphoric acid

More than half a century after Ivar Karl Ugi developed his classic four-component reaction, chemists have for the first time found a catalyst that makes the process asymmetric.

Ugi’s reaction combines a carboxylic acid, an amine, an isocyanide, and an aldehyde or ketone, to make an α-acylaminoamide. Ugi was interested in reactions that, using simple starting materials, can make chemical libraries – huge numbers of complex compounds that can, for example, be scoured for potential new drugs. The only problem with this reaction: the tertiary carbon centre it creates is racemic.

A team of chemists led by Bin Tan, from China’s Southern University of Science and Technology, and Kendall Houk, from the University of California Los Angeles, US, have found a set of phosphoric acid catalysts that, for the first time, makes the Ugi reaction churn out products with up to 94% enantiomeric excess.

However, this solution wasn’t at all obvious. The Ugi reaction is notoriously difficult to keep under chiral control as it doesn’t actually need a catalyst. ‘It is a multicomponent reaction with multiple intermediates in equilibrium,’ explains organic chemist Vishal Rai from the Indian Institute of Science Education and Research Bhopal. ‘The fact that a few of them can coordinate with solvents and other species in the milieu made it a black box for a long time.’ 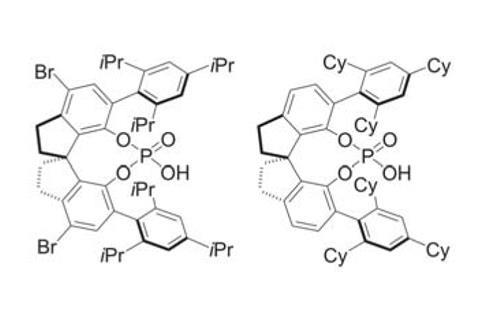 ‘We evaluated every chiral phosphoric acid in our library,’ says Tan, ‘[but] we did not get satisfactory results.’ Only after several rounds of structural tuning the team finally came across a phosphoric acid with an axially chiral spirobiindane backbone. It not only overrides uncatalysed background reactivity, but also suppresses the many side reactions the Ugi process is plagued by.

The team was surprised to find that the catalyst forms attractive non-covalent interactions with the substrate in the enantioselective step. Usually, steric repulsion is the decisive factor when it comes to controlling chirality. ‘In fact, a steric-based model developed by [Jonathan] Goodman’s group in Cambridge – very useful in many cases – fails to predict the correct enantiomers in our case,’ Houk says.

Lisa Moni, who works on multicomponent reactions at the University of Genoa, Italy, praises the reaction’s mild conditions and broad scope of more than 80 acylaminoamides. ‘This work brings a remarkable development in the field,’ agrees Rai. However, Moni says, ‘the catalysts are not commercially available and their synthesis seems not easy’.

Since the Ugi reaction produces peptide-like structures, Tan hopes to apply the method to make bioactive molecules, and to test it out in other multicomponent reactions.