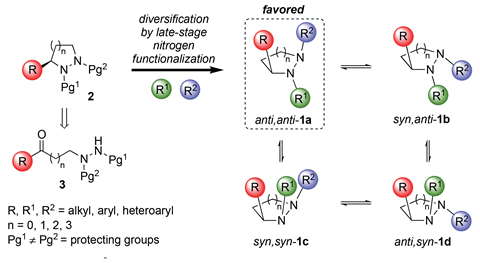 Scientists in the UK have formulated a new strategy to produce non-planar, heavily substituted heterocyclic scaffolds.1 The technique makes use of the fluxional behaviour of nitrogen atoms and can synthesise a range of cyclic hydrazine building blocks that could prove useful for drug discovery.

Evidence that complex, three-dimensional structures containing more saturated carbons are more successful in drug development has grown in recent years.2 However, many methods for making drugs rely on traditional cross-coupling reactions, which link sp2-hybridised carbons to produce flat molecules. While strategies to make non-planar structures do exist, these typically involve generating multiple chiral centres that must be individually controlled.

Mike Shipman and colleagues at the University of Warwick, in collaboration with researchers from Eli Lilly and AMRI UK, have taken a different approach to this problem. ‘We’ve tried to exploit the fact that nitrogen atoms are fluxional and have three-dimensionality, but that in complex structures, they have a thermodynamic preference for some orientations over others,’ Shipman explains. ‘If we establish one chiral centre at carbon through asymmetric catalysis and put that in close proximity to nitrogen, you can readily control the stereochemistry at the additional nitrogen centres.’ Using cyclic hydrazines containing two adjacent nitrogen atoms, Shipman and his colleagues demonstrate that three substituents can be positioned in 3D space by only needing to control the stereochemistry of one carbon centre.

To set the chirality of this carbon, the group used asymmetric transfer hydrogenation with a tethered ruthenium catalyst, a method developed by Shipman’s Warwick colleague Martin Wills. This reduces planar ketones (here containing two adjacent protected nitrogen atoms) to alcohols with high enantioselectivity and high compatibility with different functional groups. Ring closure of the alcohols via a Mitsunobu inversion, then deprotecting and functionalising the nitrogen atoms resulted in a library of cyclic hydrazine building blocks with diverse ring sizes, carbon substituents and nitrogen groups. 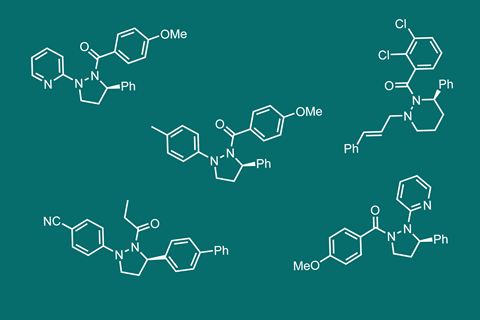 The methodology can produce a variety of cyclic hydrazines

Shipman explains that the key question of the project was whether the adjacent chirality of the carbon could set the stereochemistry of the two nitrogen atoms. ‘Pleasingly, the anti–anti relationship between the three stereocentres dominates in both solution and the solid-state,’ says Shipman. By combining the fluxional behaviour of the nitrogens with the fact that it is easy to add groups onto them, one can easily make libraries of cyclic hydrazines that display excellent shape diversity.

‘Although saturated nitrogen heterocycles are found widely in drugs, it is unusual for these ring systems to be heavily substituted,’ comments synthetic chemist Adam Nelson, from the University of Leeds, UK. ‘The conformational behaviour of the compounds here may allow unusual vectors to be explored, for example in fragment-based drug discovery.’