Carbenes, but without the explosives

Aldehydes can now be used instead of explosive diazo compounds or unstable dihalides to make carbene precursors for over 10 different reaction types. ‘We invented a new, safer way to make carbenes that enables all the unique, valuable reactivity of these compounds without the extra “bang” of unstabilised diazo reagents,’ says study leader David Nagib from Ohio State University in the US. 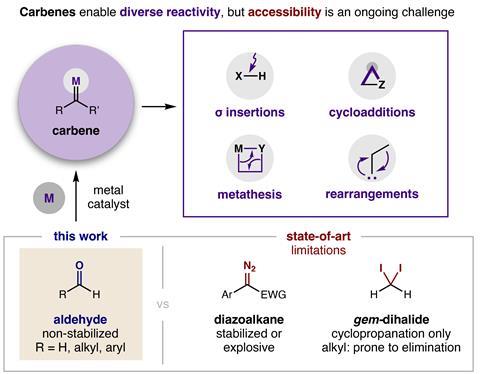 Carbenes can do a lot of useful reactions, but making them usually requires unstable and hazardous precursors

‘Carbenes and carbenoids are highly useful reactive intermediates that undergo a host of transformations, particularly on feedstock alkenes,’ comments organic chemist Varinder Aggarwal at the University of Bristol in the UK. ‘But the chemistry is notoriously hazardous due to the need to use diazo compounds as precursors. The new chemistry from Nagib and colleagues addresses this problem by generating zinc carbenoids from α-halo-pivolates, which are themselves readily obtained from the corresponding aldehydes.’

The zinc carbenoids can undergo many of the same reactions as diazo compounds but also several others. ‘While aliphatic diazo compounds are plagued by increased hazards and a propensity to undergo [an unwanted side-reaction], the zinc carbenoids are very well behaved ,’ Aggarwal says. ‘I expect that this methodology will be rapidly taken by academic and industrial groups as a safer way to exploit the rich carbenoid chemistry – and now with expanded scope too.’

Nagib points out that carbenes enable important reactions – like cyclopropanation and carbon–carbon bond insertion – which can’t be easily accessed by other methods. He says that the approach is scalable and doesn’t have the limitations of dihalide reagents, which usually only create three-membered cyclopropane rings .

The carbenes are made by adding acyl halides to aldehydes, creating stable a-halo-pivolate precursors that can be isolated and stored. Or they can be made in situ and used directly, explains Nagib. ‘Insertion of zinc into the carbon–halogen bond then gives the zinc carbenoid, which can transmetallate to various metal catalysts,’ he says, including iron, cobalt and copper. The type of metal salt used determines which product is formed.

‘Since aldehydes are ubiquitous functional groups, this method could increase the use of carbene transformations in multiple fields in industrial settings,’ says Sidney Wilkerson-Hill at the University of North Carolina in the US. He says that the reaction will undoubtedly play an important role in constructing natural products containing ‘orphaned’ cyclopropanes – those left behind by most state-of-the-art cyclopropanation methods. ‘The major limitation is the need for super-stoichiometric acid chloride, bromide or iodide activators in addition to a stoichiometric amount of zinc reductant.’

Nagib adds that the alkyl zinc intermediate reacts with acids, so it’s still not possible to insert a carbene into the oxygen–hydrogen bonds of carboxylic acids, but he’s convinced that researchers will still be interested in trying the method. ‘I predict there are three types of people who may want to use it,’ he says. ‘Some will be drawn by the use of cheap metal salts as catalysts, some will be intrigued by the improved safety profile and I hope some will want to explore more new reactivity of these unstabilised alkyl carbenes.’