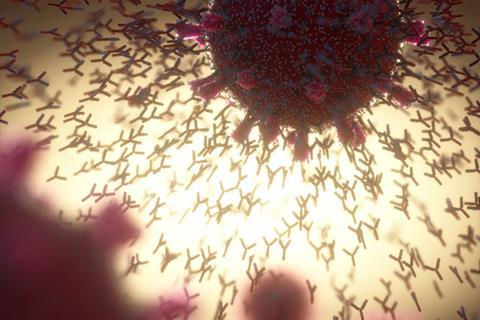 Antibody cocktails from both Eli Lilly and Regeneron Pharmaceuticals have now received emergency use authorisation from the Food and Drug Administration (FDA) in the US for treating Covid-19. Such antibodies snag on the spike protein of the virus and impede its entry into cells. However, with the spike mutating in new variants, there is concern that some of these treatments will become ineffective.

The Eli Lilly treatment consists of two antibodies that are infused intravenously into patients. The European Medicines Agency (EMA) is reviewing this cocktail. One those antibodies, bamlanivimab, was authorised alone by the FDA in November. In January, Eli Lilly reported that it reduced the risk of developing symptomatic Covid-19 by up to 80% when given to nursing home residents in the US.

Monoclonal antibodies are synthetic proteins made in mammalian cell culture. They mimic our natural antibodies. A number of them are blockbuster anti-inflammatories, and two that block the pro-inflammatory cytokine interleukin-6 reduce mortality in severely ill Covid-19 patients.

For Sars-CoV-2, most monoclonal antibodies are made to target the part of the spike protein that binds to the human Ace2 receptor. ‘You can essentially make unlimited amounts of that antibody in a bioreactor as a biological drug,’ says James Crowe, an immunologist at Vanderbilt University Medical Center in the US.

To develop new monoclonal antibodies against Sars-CoV-2, scientists first select from thousands of potential candidates, and then mix a few with virus in the lab to identify the most potent. ‘It is like looking for a needle in a haystack [initially],’ says Crowe. ‘The next step is usually to test them in small animals to see if they are protective, and then larger animals, such as macaque monkeys.’ 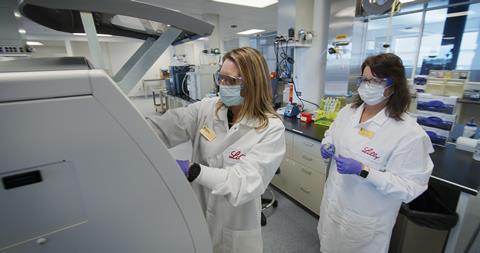 Lilly scientists developed the antibody in bamlanivimab less than three months after it was discovered by AbCellera and scientists at the National Institute of Allergy and Infectious Diseases Vaccine Research Center. It was identified from a blood sample taken from one of the first US patients who recovered from Covid-19

This all takes time, which is why Crowe was so impressed by Eli Lilly’s progress. ‘They were in the clinic by June 2020, which is a miracle. The fastest ever,’ says Crowe. This was bamlanivimab, discovered in a blood sample taken from one of the first patients in the US to recover from Covid-19.

Unfortunately, antibodies have mostly disappointed in treating severely ill Covid-19 patients. ‘The results from very sick patients have been somewhat lacklustre,’ says Aashish Manglik, a biochemist at the University of California, San Francisco in the US. ‘They have to give huge doses of vaccine, almost eight grams per patient.’ Crowe explains that ‘the longer you wait, the more difficult it is to treat’ with antibodies.

Another issue is that existing antibody therapies require intravenous infusion. This means mild or moderately ill patients must go to a medical facility, when they are probably most infectious. ‘The logistics of getting many people into such a facility makes it very challenging to deploy the antibody approach broadly,’ Manglik says. Crowe describes intravenous infusion as a ‘moderate barrier to frequent use.’

AstraZeneca has five phase 3 clinical trials underway on a two-antibody combo (designated AZD7442), developed at Crowe’s lab at Vanderbilt. This cocktail can be given as an injection, and one trial with 5000 participants will test it as a preventive shot. ‘It’s an intramuscular shot, so that’s going be a lot easier to use than intravenous infusions,’ says Crowe.

Cocktails are viewed more favourably than lone antibodies. An antibody developed by Vir Biotechnology and GSK is being combined with an Eli Lilly antibody (bamlanivimab) to treat patients as part of a new trial. The two bind to different parts of the spike protein.

‘The ability of the virus to escape one antibody is reasonably high,’ says Crowe. ‘But its ability to escape two antibodies, against different parts of the virus, is very low.’ Combinations are an insurance against virus escape.

The best solution to save coronavirus-infected patients is to combine approved antibodies from different companies, says immunologist Hans-Martin Jäck at the University of Erlangen-Nuremberg in Germany, who developed two monoclonal antibodies against the Sars-CoV-2 spike. A test site could collect approved antibodies and trial them against a new mutant in a few weeks, he says. ‘If you combine the most effective in one cocktail, then one is almost certainly going to work against any new variant.’ However, this concept would require some rethinking by drug regulators.

Researchers are also perusing alternative approaches. Manglik has developed completely synthetic nanobodies against the spike protein, from a library of two billion compounds. ‘We are doing animal testing and hope to enter clinical trials in the next couple of months.’ The nanobody could be administered directly to the nose or the airways, he adds. 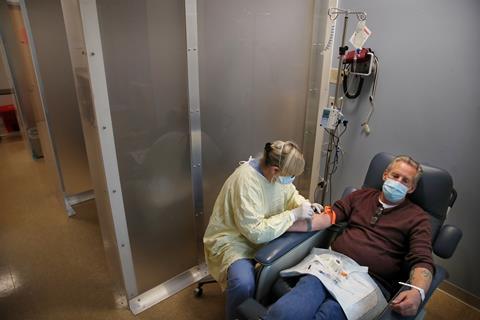 Nanobodies are small proteins originally identified in camelid species like llama and alpaca, which make these mini-versions of antibodies. The first such miniature antibody was approved for clinical use by the European Medicines Agency in 2018: a Sanofi nanobody (Cablivi) for a rare blood clotting disorder.

Another strategy is to develop ‘broadly-neutralising antibodies’ to target a range of related viruses. Laura Walker, of US biotechnology company Adagio Therapeutics, and colleagues have engineered an antibody that neutralises Sars-CoV-2,2 but also related coronaviruses, including Sars-CoV. It does this by targeting a conserved region of the receptor binding domain, which they term ‘an Achilles’ heel’ and a possible target of future pan-Sars vaccines. A half-life extended version of the antibody (ADG20) entered clinical trial a few weeks ago and will be administered as a shot.

Monoclonal antibodies can be used as a prophylaxis, immediately after someone is exposed to Sars-CoV-2, unlike a vaccine. For now though, existing monoclonal antibodies need to be infused and so remain a logistically challenging option in many settings.

Unlike anti-inflammatory conditions, Jäck says ‘antibodies will not be a blockbuster for coronavirus, because those who will need them are only those who cannot get vaccinated,’ such as immune compromised individuals. He adds, however, that antibody therapies will certainly save lives.