As 2020 ended, news of the first Covid-19 vaccine approvals came as a huge relief to national governments and their citizens. Yet with Covid-19 infection rates rising in many countries, and with more infectious variants of the virus emerging, the need for widespread vaccination grows more urgent and regulators around the world are now racing to assess and approve vaccines.

The BioNTech-Pfizer vaccine was first approved by the UK on 2 December and now has approval in almost 50 countries. Moderna’s vaccine also gained emergency approval in the US and the UK in December, with the European Medicines Agency (EMA) greenlighting it last week. Both are RNA vaccines and have shown efficacies of around 95% in their clinical trials. 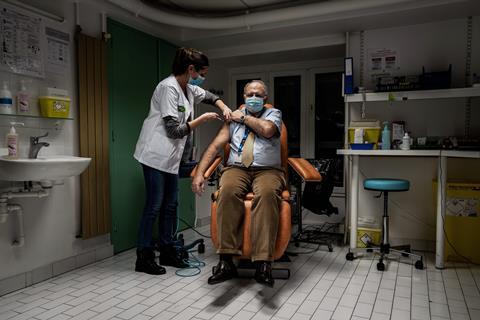 A patient in Lyon, France receives a dose of the Pfixer–BioNTech vaccine. The EU has secured 2 billion vaccine doses for its members.

The vaccine developed by the University of Oxford and AstraZeneca, which is based on a chimp adenovirus vector, has also been approved in the UK, as well as in India and Argentina. However, US and EU drug regulators are not satisfied with its UK trial, which initially looked promising.

Kim Mulholland at Murdoch Children’s Research Institute in Australia suggests that because the Oxford–AZ trial results were presented ‘warts and all’, the publications are more difficult to follow. Also, a mistake with dose measuring left questions, with 62% efficacy in those receiving full doses a month apart, but 90% in a subset receiving a lower first dose. The vaccine is expected to be submitted to the EMA this week for emergency authorisation, with a decision expected later this month. AstraZeneca is also carrying out a phase 3 trial in the US.

Vaccines developed elsewhere in the world are also gaining approval. Russia’s Sputnik V vaccine developed by the Gamaleya Center, has been approved in Russia, Belarus, Argentina and Guinea. It is based on two different human adenoviral vectors and has a reported efficacy of over 90%, but the full trial results have not yet been published and some scientists say the results are based on inadequate data. ‘Lots of people say its only based on 20 cases, so has not enough power, but a number of international vaccines such as [Haemophilus influenzae type B] had pivotal trials with about that many cases,’ counters Mulholland.

China approved the vaccine from its state-owned developer Sinopharm on 31 December. This vaccine is an inactivated Sars-CoV-2 virus that Sinopharm says shows 79% efficacy, but ‘[Sinopharm] did not release any details, so we are waiting to see a publication,’ notes Mulholland. The vaccine is still in trials in Peru, Argentina, Egypt, Jordan and the United Arab Emirates.

Chinese biotech firm Sinovac also looks close to gaining approval for its inactivated vaccine candidate (CoronaVac). It published data on early clinical trials in November. Brazilian researchers, as reported in Science, said the vaccine had a 78% efficacy in preventing mild Covid-19, and completely prevented severe disease, but overall efficacy has since been revised to 50%.

Meanwhile, another inactivated virus vaccine developed by Indian firm Bharat Biotech (Covavaxin) received emergency approval on 3 January in India, but the move ignited controversy among health experts there since it preceded publication of phase 3 safety and efficacy data. ‘Bharat is a fabulous company with a good track record in producing vaccines,’ says Mulholland, but given the lack of public data he adds that he is ‘surprised that the Indian authorities gave it an emergency listing’.

John Moore, a virologist at Weill Cornell Medical College in New York, US, also notes that these approval decisions from China and India ‘would not be made in America, because they are doing so without the efficacy and safety data or equivalent of the FDA [Food and Drug Administration] peer review process’. 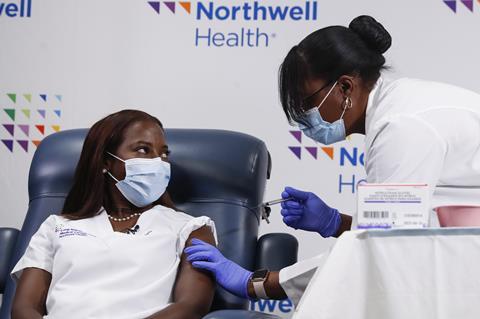 A nurse in New York, US, receives a second dose of Pfizer–BioNTech vaccine. Frontline healthcare workers and vulerable groups are being prioritised in vaccine rollout programmes.

Proteins in the pipeline

Close behind this first batch of approvals, many more candidates are making progress toward submission. Currently 17 vaccines are in phase 3 trials (which includes some of those already approved), according to a vaccine tracker at McGill University in Canada, with 200 clinical trials underway in total.

Among them are the first protein-based Covid-19 vaccines, which have taken longer to develop, but are a more established technology with a good record of safety and efficacy. Novavax’s protein-based vaccine started a phase 3 trial in September in the UK. ‘Early studies looked good,’ says Mulholland, ‘but they had delays in vaccine production.’ Mulholland predicts that this vaccine will arrive around mid-year. A phase 3 trial in the US and Mexico was announced in December.

Johnson & Johnson’s vaccine is based on an adenovirus 26 vector, a platform used in its Ebola vaccine that received EMA approval in 2020. The vaccine began phase 3 trials in September, and was fully enrolled in December. Preliminary results are expected in January, and the company may apply for emergency FDA approval in February.

‘This is a vaccine that could be produced in large quantities and which doesn’t require strict cold chain,’ says epidemiologist Peter Smith at the London School of Hygiene & Tropical Medicine, UK. It also has the potential advantage of being a single dose vaccine: a single-dose trial with 30,000 participants was announced in November. This makes delivery less complicated than the two-dose regime required by many of the other vaccines, and ‘would be a significant step forward, especially in low and middle income countries,’ says Smith.

Virologists say current approved vaccines are also expected to be effective against new strains of the virus that have been identified so far. However, it is possible that the virus will evolve to escape vaccines in future.

As approvals are granted, companies have begun rolling out manufacture and supply on a huge scale. The BioNTech–Pfizer vaccine was expected to deliver 45 million doses in 2020 and over one billion in 2021. Moderna says it can make between 600 million and 1 billion doses this year: much of which is destined for the US. And AstraZeneca reckons it can produce 2 billion doses in 2021. Gamaleya also says it has agreements with international manufacturers to produce vaccine for 500 million people in 2021, and Bharat Biotech says it is planning to produce 700 million doses of Covavaxin per year.

Until the vaccine reaches every country, it is still a global health danger, and a drag on the global economy

But production estimates for vaccines may outstrip reality, warn experts. ‘When you are dealing with projections of tens of millions of doses there are bound to be slips,’ Moore advises. ‘Take those initial projections with a pinch of salt.’

There are also concerns about wealthier countries elbowing their way to the front of the queue. Europe and North America have secured much of the early supply, with the EU reportedly securing 2 billion doses. The Covax consortium – coordinated by Gavi, the Vaccine Alliance, the Coalition for Epidemic Preparedness Innovations (CEPI) and the World Health Organization – was set up last year to facilitate equitable vaccine rollout to all countries.

In December, Covax announced plans to deliver at least 1.3 billion donor-funded doses of vaccines to 92 countries in 2021. It has signed purchase agreements with AstraZeneca, and a memorandum of understanding with J&J. It also has an agreement with the Serum Institue of India to produce 200 million doses of either the Oxford–AZ or Novavax vaccine. Pfizer and Moderna have yet to contribute, though the cold chain requirements of their RNA vaccines make them less suited to low- and middle-income countries.

Julia Barnes-Weise, director of the Global Healthcare Innovation Alliances Accelerator and consultant to CEPI says that Covax’s effort has both a moral and medical imperative. ‘Until the vaccine reaches every country, it is still a global health danger, and a drag on the global economy,’ she explains. Yet it remains underfunded. The US has been lukewarm towards Covax, and vaccine watchers hope that the new Biden administration will be more willing to lend its support.

The speed of vaccine development has surprised everyone, says Moore, and is a cause for celebration: ‘The scientific community has done a phenomenal job. In March, people would have laughed at you if you said a vaccine would be in people’s arm in December, but it has proved possible.’ Yet the challenge remains to get enough vaccines into arms to finally end the pandemic.

While the vaccination process gets underway in some countries, those in less wealthy parts of the world such as the countries of the Western Balkans are still waiting to begin inoculating their populations.

Most of the countries in the region, which includes Albania, Bosnia and Herzegovina, Kosovo, North Macedonia, Montenegro and Serbia, border EU member states and are treated as ‘privileged partners’ by the EU. But they are not yet EU members and most are relying on the Covax consortium for their vaccine provision. They expect to receive this supply by the end of the first quarter of 2021.

The European Commission has also adopted a package of €70 million (£62 million) to help countries in the Western Balkans access Covid-19 vaccines procured by the EU. However, the delivery of vaccines under that scheme is expected to start later than the vaccination campaigns in the EU, the Commission noted.

North Macedonia’s health minister Venko Filipce tells Chemistry World that the country currently has three routes to secure a vaccine supply for its 2 million citizens. ‘We are looking at 833,000 doses through the Covax mechanism, 800,000 doses by direct agreement with Pfizer and 800,000 doses which we have already applied and received support for from the office of the European Union in our country.’ Filipce adds that he expects the first delivery of vaccines soon, but no date has been set.

Bosnia and Herzegovina is also counting on Covax to provide the first part of the vaccine doses that the country requires. Representatives of its civil affairs ministry said that so far they ordered 1.2 million doses, which would be enough to cover about 20% of its population.

Health experts in the region warn that fair vaccine distribution is vital to ensure the fight against the pandemic isn’t undermined. ’If smaller countries remain unvaccinated … the virus could then spread back to [larger countries] again,’ North Macedonia-based epidemiologist Dragan Danilovski said.

So far, Serbia is the only country in the region to have begun vaccination. Serbia is also relying on Covax, but before the end of 2020, the country secured 4875 doses of the Pfizer–BioNTech vaccine, and began the immunisation process on 24 December 2020. Serbian authorities also announced that they expect at least four vaccines from various manufacturers to arrive in the country by the end of January. And while most of the Western Balkans countries are following the lead of the European Medicines Agency (EMA) when it comes to the procurement of approved vaccines, Serbia has also ordered non-EMA approved vaccines such as 2 million doses of Russia’s Sputnik V vaccine.

This article was updated on 18 January 2021. The original gave an incorrect figure for production of the Oxford-AZ vaccine in 2021.