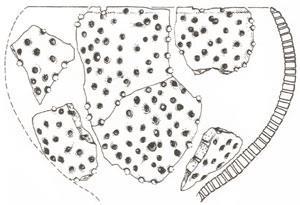 New evidence suggests that early farmers made cheese to allow them to cope with the lactose found in raw milk. These farmers may have lacked the enzymes to digest to breakdown the sugar, so would have been lactose intolerant. An international team has uncovered this through the use of gas chromatography–mass spectrometry (GCMS) to analyse dairy residues in fragments of ancient Polish pottery – potsherds – thought to be part of primitive cheese strainers.1

As agriculture evolved, prehistoric farmers took to cheese as a way of preserving milk but precisely when this happened in human history has not been pinpointed. Milk residues have been detected in pottery vessels from seventh millennium sites from north-western Anatolia, known today as Asia Minor. Potsherds pierced with small holes have also been found at early Neolithic sites in Europe dating to 6000BC.

This is among the earliest evidence of milk processing but does not explicitly link the vessels to cheese making. Now, Richard Evershed’s team at the University of Bristol, UK, and colleagues in Poland and the US have investigated the stable carbon isotopes (13C/12C) in fatty acid residues from potsherds with tiny holes thought to be parts of long-broken cheese strainers.

Cheese making requires several steps to coagulate the milk enzymatically or by using acid to make an edible, fatty solid that can be stored for later consumption. An important part of the process involves straining the water-soluble components, the whey, which contains lactose. Today, straining is carried out using coarse textiles, ‘cheese- cloth’, or plastic and metal sieves. Ancient dairy farmers are thought to have used pots full of holes, which retained the fatty and protein-rich curds and allowed the liquid whey to strain through.

The team used lipid biomarkers and their stable carbon isotopic compositions to classify animal fats in organic residues from potsherds found at prehistoric settlements in the Kuyavia region, Poland. The team points out that two out of every five potsherds dating from around 5000BC from these sites contain lipid residues at levels consistent with those found at other sites thought to have had dairy farms. Moreover, the lipid extracts contain predominantly C16:0 and C18:0 fatty acids, as well as odd-number and branched-chain fatty acids which, the team explains, are biomarkers for bacteria produced in the gut of ruminant animals. In addition, comparison with residues from cooking vessels also demonstrated that the biomarkers and carbon isotopic values show markedly different uses between the cooking and straining vessels.

The team concludes that this is the first evidence of specialised use of pottery for dairy processing during the early Neolithic (circa 5400–5300BC and 4900–4800BC) and point out that the process seems not to have changed throughout that period. Increasing evidence of milk use during this period of human history also coincides with the predicted increase in the gene for the enzyme lactase, which breaks down lactose.

‘Certainly the date [for the earliest production of cheese] could be pushed back further but where is the evidence going to come from?’ asks Evershed. ‘We have milk in pottery a 1000 years earlier,2 but that was in non-distinctive cooking vessels. The critical factor here is the connection of the milk fats with vessels that look like modern cheese strainers and what other milk processing activity would require straining? None that we know of.’

‘This article is of primary importance,’ says Armelle Charrié of the University of Strasbourg, France. ‘The exceptional nature of the samples in a rare state of preservation and the type of chemical analyses carried out by GCMS and GC-C-IRMS [gas chromatography combustion isotope ratio mass spectrometry] leave no room for doubt on the validity of the results, providing evidence for the cognitive abilities of the population of northern Europe in the 6th millennium BC.’