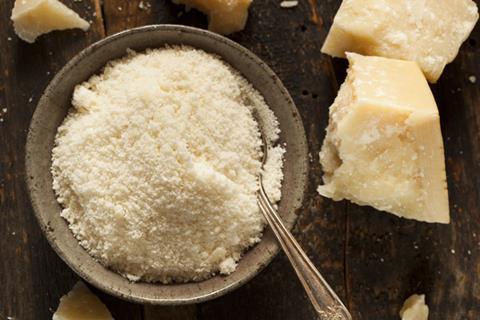 Any foodie will tell you that no Italian meal is complete without a sprinkling of Parmesan. Now, the compounds that give the much-loved cheese its signature taste have been identified by a pair of chemists in Germany.

Hedda Hillmann and Thomas Hofmann from the Technical University of Munich say their findings – which include almost 50 different chemicals responsible for various elements of the flavour – could be used to monitor the quality of the cheese, or to make it taste even better. ‘This molecular blueprint of a Parmesan’s chemosensory signature … opens new avenues for a more scientifically directed taste improvement of cheese by tailoring manufacturing parameters,’ they conclude in their paper.

The study is the first to target Parmesan specifically, but there have been similar analyses carried out on other cheeses such as Gouda. The pair focused on non-volatile components of flavour that dictate the taste of the cheese, rather than the smell. Firstly, to get an idea of the basic taste they asked a trained panel of 12 tasters to rate the  intensity of different taste sensations, such as sweet or saltiness, for samples of both solid Parmesan and water soluble extract containing the taste components separated from the cheese matrix. The dominant tastes were found to be saltiness, bitterness, ‘burning’ and the recently described ‘kokumi’ sensation linked to perceptions of ‘heartiness’.

Hillmann and Hofmann then used a number of analytical techniques to screen the cheese extract for compounds known to produce these tastes, and calculated which ones were present in high enough concentrations to be tasted. This gave them a ‘molecular blueprint’ for the taste of Parmesan which indicated the compounds responsible for each type of flavour. For example, high levels of sodium, potassium and chloride ions account for the cheese’s saltiness, and five biogenic amines including histamine, cadaverine and putrescene were found to be responsible for the ‘burning’ element. Several gamma-glutamyl peptides, which are associated with kokumi, were also identified.

To investigate whether these results could be used to manipulate the taste of the cheese they gave a panel of tasters a cheese extract that had been altered to contain different proportions of some of the key ingredients. The presence or absence of different components did affect the tasters’ scores – for example, eliminating gamma-glutamyl peptides or biogenic amines led to much lower ratings for kokumi or burning sensations, respectively. The researchers even recreated a cheese-like matrix that tasted almost identical to the real thing by pressing together the taste compounds they had identified with the isolated fats and protein from authentic Parmesan and ‘maturing’ the mixture overnight.

Michael Tunick, a chemist at the US Department of Agriculture who specialises in dairy, says the work may be of interest to the food industry. ‘The information in this study and others like it could be used to engineer food that tastes the same as the genuine product,’ he tells Chemistry World.