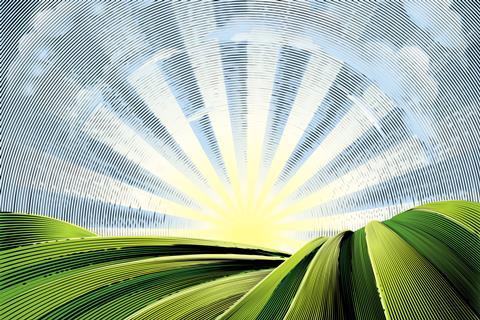 Farming has inspired a method to increase the longevity of heterogeneous palladium catalysts. Rotating through different reactions, rather than sticking to the same one, reactivates a catalyst’s surface, which helps it retain its activity and perform well for longer.

A perennial issue in the field of catalysis is loss of activity and deactivation after repeated reactions. As many reactions call for catalysts made from expensive and rare materials, such as noble metals, many researchers are searching for ways to perform these reactions with more economically viable catalysts, or no catalyst at all. In many cases, cost savings mean a loss of performance. Extending the lifetime of existing catalysts, however, might be a better solution.

Now, a study by researchers at the University of Ottawa in Canada, led by Tito Scaiano and Anabel Lanterna, proposes that rotating through a sequence of different, but complementary, reactions can help preserve catalyst performance. Akin to farmers maintaining nutrient levels in their fields by rotating through different crops each season, the team has dubbed their technique “catalytic farming”. ‘[Farmers] are using exactly the same land for years and years, and they are fully aware of what each crop can do … We thought we might do the same thing with our materials, but first we needed to build up knowledge on how the materials work and find a material that can do multiple reactions, not just one,’ says Lanterna. 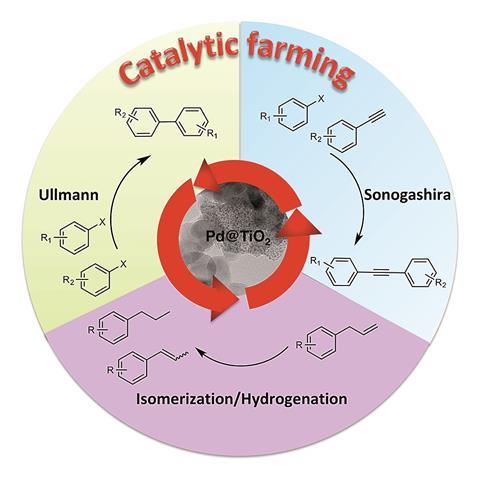 The chosen reactions must work well together. A reaction whose conditions oxidise the catalyst surface immediately followed by one that reduces it should result in very little overall change and greater performance retention. Here the researchers have combined Sonogashira coupling with an Ullman reaction. ‘The main complementary [factor] between the two reactions is the change in the solvent. We found that the two particular solvents we were alternating were good at changing the oxidation state of the palladium, so were the types of reaction that we wanted to perform,’ explains Lanterna.

Catalysis expert Kelsey Stoerzinger, from Oregon State University in the US, says a significant advantage of this technique is that it is possible to regenerate the catalyst while still making useful products. ‘We regenerate catalysts by heating them up or introducing oxygen or hydrogen and it’s a very blanket procedure that’s expensive and wasteful. I like the concept of rotating reactions as a way to think about what is happening to your catalyst … and then using that rotation to regenerate your catalyst in situ.’

Stoerzinger suggests that technique might be relevant beyond palladium catalysts: ‘You could also think of doing it with a copper catalyst … there are other precious metals that can oxidise or reduce, like iridium or ruthenium, so I think you’d use different reactions, but this could be applicable to a range of catalysts and a different class of reactions.’