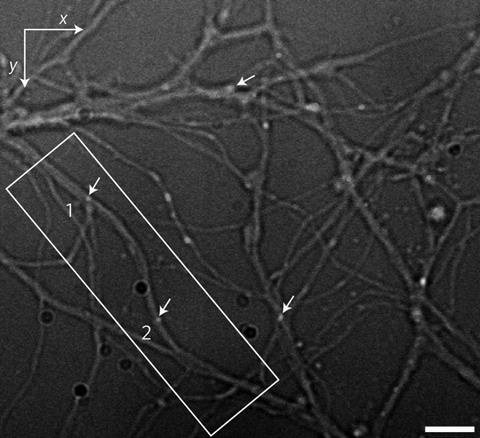 The nanodiamonds (pointed out by arrows) held in vesicles can be tracked moving through the axons and dendrites of neurons. Researchers hope that this technique will help to understand neurodegenerative diseases like Alzheimer’s

Fluorescent nanodiamonds that can be internalised by neurons have been used by researchers in France to study vesicle flow inside them. By tracking the nanodiamonds, researchers showed that certain drugs could impede the vesicles’ progress. They suggest that, although the technique is in its infancy, it could provide insights into the underlying causes of neurodegenerative disorders such as Alzheimer’s disease or be useful in drug testing.

Neurons carry electrical impulses around the body transmitting information as they go. However, to do this, sub-micron size cargoes have to be carried along the neurons’ axons and dendrites – restricting this process has been linked to some neurodegenerative diseases. These diseases are known to have multiple causes, so the impact of one change in gene expression is likely to be minor. Therefore, an extremely small and bright label is needed to detect it. Researchers have previously used fluorescent proteins or quantum dots, but these tend to stop working after a short time or blink, introducing noise into the data. To get around these problems, researchers at the Laboratory of Aimé Cotton in France and elsewhere create nanodiamonds doped with a small amount of nitrogen. They then knock out a small number of carbon atoms to create ‘vacancies’ in the nanodiamonds. Owing to the effects of lattice strain, the vacancies end up sitting next to the nitrogen atoms, and the resulting nitrogen-vacancy centre has an electronic structure that gives it a perfectly stable, bright red fluorescence. As an added bonus the nanodiamonds are non-toxic too.

To test the nanodiamonds, the researchers added them to cultured neurons from the brains of embryonic mice. The cells internalised the nanodiamonds in vesicles that were then transported along neuronal branches, allowing their progress to be followed by video microscopy. The team recorded trajectories of healthy neurons containing labelled vesicles. The team then looked at the effect a slight overproduction of an enzyme found in excess in the brains of patients with autism post mortem had on neurons. They found impaired intraneuronal transport in these neurons. ‘The next step is to get closer to the real brain,’ says co-principal investigator François Treussart, adding that the team first wants to investigate transport in thin brain slices.

‘Tagging different cellular structures with nanodiamonds is getting more and more widespread,’ says Jörg Wrachtrup of the University of Stuttgart, Germany, who was not involved in the research. ‘Nobody, however, has developed the system to such an extent that they were able to derive valid cellular information. This is what they have achieved.’