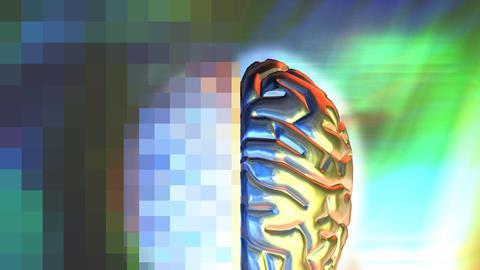 Alzheimer’s disease: have drug developers been on the wrong track for decades?

US drug giant Eli Lilly recently announced yet another failure in the quest to develop a treatment for Alzheimer’s disease in November last year. Its drug candidate solanezumab, an antibody which attacks amyloid-β protein aggregates, had crashed and burned in Phase III clinical trials, failing to significantly slow down cognitive decline in patients with mild dementia.

Solanezumab was just the latest in a string of dementia drug failures – earlier this year Pfizer and Johnson & Johnson announced they would halt the development of bapineuzumab, another immune-based therapy. And it is estimated that over the last 15 years over 400 clinical trials have ended in disappointment.

Like solanezumab, the vast majority of candidates target amyloid-β – the misfolded protein that forms plaques which characterise the brains of Alzheimer’s sufferers. Ever since genetic studies in the 1980s linked mutations in the amyloid precursor protein genes to early-onset Alzheimer’s, amyloid build-up has been the dominant theory for the underlying cause of the disease – and the one most drug developers have focused on. But in the wake of a steadfast lack of progress there are growing calls from the research community for drug developers to branch out.

‘Over the last decade at least, the amyloid theory has held sway and has almost become unchallengeable… There has been virtually an implicit requirement that every idea needs to incorporate the amyloid hypothesis in some form or other,’ says Peter Roberts, a pharmacologist at the University of Bristol, UK. ‘Until there is a fundamental shift in approach, I can’t see this [lack of clinical success] changing.’

One potential target that Roberts says deserves more attention is tau, another protein in the brain that becomes abnormal and accumulates in Alzheimer’s patients, forming twisted strands called tangles that disrupt the flow of nutrients through nerve cells.

Tau has been the subject of Alzheimer’s research for many years, and in some ways looks like a more promising target, explains David Reynolds, chief scientific officer at the charity Alzheimer’s Research UK. ‘The symptoms of Alzheimer’s disease don’t correlate very well with amyloid levels – we can have people with very high amyloid with no cognitive impairment,’ he says. ‘Tangles caused by hyperphosphorylated tau, on the other hand, do correlate a lot better with cognitive decline.’

But until recently the protein was largely ignored by big pharma in favour of amyloid-targeting approaches. Some companies have recently embarked upon clinical trials with candidates that target tau, although so far they have experienced similar setbacks to amyloid: TauRX, a company trialling a tau-based therapy, recently announced their drug had fallen at the final hurdle by failing to show any clinical effect in Phase III trials.

For some the rethink needs to be more radical still. For several years Ruth Itzhaki and her group at the University of Manchester in the UK have been exploring the possibility of an infectious component to Alzheimer’s, with the β-amyloid build-up a symptom rather than the root cause. 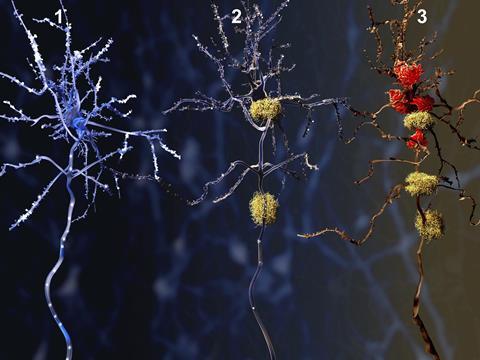 Computer illustration of a healthy neuron (left), a neuron with amyloid plaques (centre) and a dead neuron being digested by microglia cells (right). Some researchers are now challenging the established dogma that amyloid plaques are actually the cause of Alzheimer’s disease

Their work has revealed a possible link between the risk of Alzheimer’s, herpes simplex virus type 1 (HSV1) and a gene called APOE. ‘We found a combination of the virus present in [people’s] brains and this genetic factor together conferred a strong risk of the disease,’ Itzhaki says. They went on to show that the main characteristics of a brain with Alzheimer’s – the formation of abnormal amyloid and Tau – could be reproduced in cell culture by a virus infection, and more recently that the amount of these proteins in cell culture can be reduced by attacking HSV1 with antivirals.

The group desperately want to progress their work, but have experienced opposition from others who think the focus should remain on amyloid or Tau. ‘I have been trying for the last five years to get funding for a clinical trial and it’s been turned down every time,’ says Itzhaki. ‘Some people who are very influential in the field just don’t like the idea of a virus.’

Other groups are following similar leads, including a Madrid team that has found evidence for a link between Alzheimer’s and fungal infection, and various other groups are looking at the influence of bacteria. Itzhaki says these groups have faced a lot of the same problems as hers, either attracting derision or being ignored entirely. But she hopes that perhaps funders and drug developers will start to take these ideas a bit more seriously in light of the most recent slew of anti-amyloid candidate failures.

Even if such radical ideas are off limits there still needs to be a shift in the way drug developers think about the disease, says Reynolds.

The problem isn’t necessarily a fault with the hypothesis itself – it may just be that the drugs on trial are not being taken early enough. Amyloid might have been building up in a patient’s brain for 15 or 20 years before they begin to experience symptoms, and therein lies the problem with treatments like solanezumab. ‘It’s been pretty much proven that treating moderate Alzheimer’s patients [with anti-amyloid treatments] doesn’t have any clinical benefit,’ says Reynolds. ‘What we need to do is find people with very, very mild cognitive deficit before they get a diagnosis of Alzheimer’s disease, or possibly even people with no symptoms at all but we can see using a PET scan that they’ve got amyloid building up in their brain.’

It may be that Alzheimer’s may need to be dealt with preventatively, Reynolds adds, like taking statins to lower cholesterol and stave off heart disease. However, he also emphasises that it is important to explore other aspects of the disease besides amyloid. This means looking at, for example, the cell pathways surrounding protein manufacture and waste disposal in the brain that, if disrupted, can exacerbate problems.

‘What we have seen from cancer [research] is that there are quite a lot of fundamental cellular processes that you can pep up or tone down,’ he says. ‘[But] it will be challenging to find just the right points of intervention where you can have some benefit without causing side effects.’ For that reason, he says, these areas of research will take a while to mature.

Roberts agrees it is becoming increasingly obvious that there is unlikely to be a silver bullet solution to such a complex disease. ‘Unfortunately, there has always been something of a sheep mentality in the pharmaceutical industry,’ he says. ‘Follow a theory, spend loads of [money] trying find a drug and then, if it doesn’t work or produces serious side effects, dump the programme. What is needed is a much more holistic approach to the whole disease, rather than trying to compartmentalise it neatly within an “amyloid hypothesis”, a “Tau hypothesis” or anything else.’

He is not optimistic that there will be a breakthrough in Alzheimer’s treatment in the next 10–20 years, but adds that: ‘Where there is a will and people are open-minded enough to follow the evidence and not dismiss interpretations that do not fit with dogma, there is a possibility of success.’