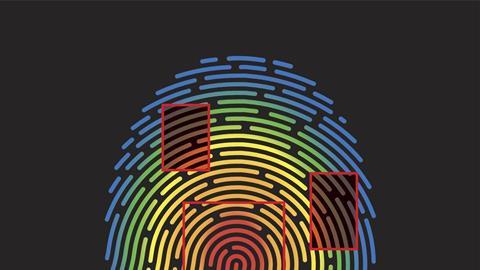 DNA fingerprinting accuracy to be overhauled in US

The chances of correctly identifying individuals during forensic testing has taken a step forward, as US forensic labs must now generate DNA profiles using seven additional DNA markers. The new markers will also help identify samples which have mixtures of DNA from more than one person. Concerns over DNA from multiple sources have been raised on both sides of the Atlantic – most recently in a report from President Obama’s scientific advisers.

DNA fingerprinting currently relies on short repetitive stretches of the genome, with the number of repeats for each marker varying from person to person. With 20 markers, rather than 13 as previously used, the chances of two people who are not closely related having the same number of repeats is extremely small: less than one in a billion billion, according to the National Institutes of Science and Technology.

Three of the new markers are mini markers and were developed so as to find the shortest markers possible to help identify victims of the 11 September 2001 terrorist attacks, whose DNA was badly degraded. Research geneticist Mike Coble, who helped develop the new mini markers, says that they were made possible thanks to new fluorescent dyes. These dyes also provide crucial new information when forensic examiners are faced with an item like a mobile phone, he explains. ‘You either have to go horizontally and make markers larger and larger or go vertically and have five or six dye channels.’ Capillary instruments and separation chemistry have also improved, so sensitivity is greater.

The new fluorescent dye channels offer the prospect of finding seven or eight markers and thereby increasing the chances of identifying someone who has touched the phone. Coble’s mini markers have already been adopted in Europe, as EU members states sought to expand the number of markers, while planning to share data across countries. With bigger databases the likelihood of a match happening by chances increases, so more markers are essential.

Correction: The headline was updated on 10 January