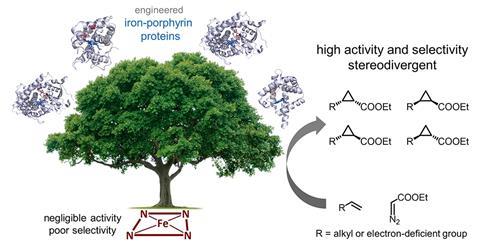 Unactivated alkenes have been transformed into four stereoisomers of cyclopropane by a group of enzymes – the first example of a biocatalytic reaction performed by haem proteins that does not occur in nature. The set of biocatalysts could serve as starting points for ‘green’ synthesis of cyclopropanated products, the researchers say. Such products include the insecticides pyrethroids and several quinolone antibiotics.

Using enzymes to achieve sustainable synthesis of valuable small molecules can be useful, particularly in process manufacturing. The problem is that enzymes catalyse only a narrow range of reactions. Now, Frances Arnold’s group at the California Institute of Technology has shown they can ‘import’ some of the transformations that have been developed with small molecule organic/organometallic catalysts into the biological world.

Arnold’s team screened a range of natural and engineered haem-binding proteins known as iron−porphyrins. Her group has previously shown that haem proteins can be engineered to catalyse the cyclopropanation of styrenyl alkenes with ethyl diazoacetate. This time, they focused on using unactivated alkenes and electron-deficient alkenes in a stereo-divergent synthesis, where a set of complementary catalysts can generate every possible stereoisomer of the product. Different stereoisomers can have very diﬀerent biological activity, which is significant when screening drug candidates.

The team enhanced the haem-proteins to generate enzymes that could catalyse the conversion of alkenes into cyclopropanes through carbene transfer. Widely used in synthetic chemistry, this reaction is not known in nature. The team reports that haem proteins expressed in bacteria catalysed cyclopropanation in mild, aqueous conditions. By taking advantage of the inherent sequence diversity of the proteins, they were able to selectively obtain each possible stereoisomer of the product.

While other work has showed that such cyclopropanation reactions can be done, the focus of these works have been on the use of activated styrenyl olefin, comments Hans Renata of the Scripps Research Institute, US. ‘There have been some developments of reacting with aliphatic olefins, but they often necessitate switching the metal within the cofactor from iron to other alternatives, rendering the process not fully genetically-encoded,’ he explains. ‘This work is novel because Arnold and co-workers showed that by mining the natural diversity of haem-containing proteins, they can identify new biocatalysts for the cyclopropanation of non-styrenyl alkenes without any need for switching the identity of the metal.’

However, Renata points out that there is still some way to go before that this system could be used for sustainable synthesis of cyclopropanated products. ‘The turnover numbers achieved are impressive but might not be high enough yet for practical use in process manufacturing settings. But further engineering of the enzymes can solve this issue – it’s just a matter of time.’

Correction: The spelling of Hans Renata’s name was corrected.