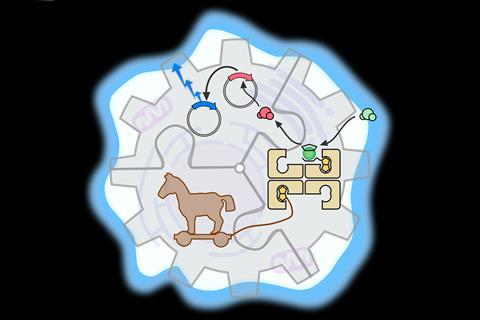 A ‘Trojan horse’ moiety is combined with streptavidin (yellow) along with a ruthenium catalyst (dark green) to produce an artificial metalloenzyme capable of cell penetration. The enzyme can catalyse the uncaging of a cellular hormone (light green/red) that then turns on a synthetic gene switch, resulting in a bioluminescent signal

A team of Swiss scientists has engineered a mammalian cell with a synthetic gene switch regulated by a cell-penetrating artificial metalloenzyme in a bid to introduce chemistry that’s new-to-nature. They want to use this hybrid biocatalyst to bring new chemical reactions to cells to tackle malfunctions such as cancer.

To get the artificial ruthenium-containing metalloenzyme into the cell, the team developed a ‘Trojan-horse’ strategy. The hybrid catalyst consists of streptavidin, a catalytically inactive protein known for its high affinity towards biotin, which only becomes enzymatically active when it combines with a biotinylated ruthenium catalyst. The researchers also attached cell-penetrating poly(disulfides) to the metalloenzyme, allowing it to be smuggled into the cell, where it catalyses the uncaging of a protected thyroid hormone. Upon release, the free hormone turns on the overexpression of a reporter enzyme. ‘My ultimate goal is to cure a badly-functioning cell, such as cancer, by an on-demand non-canonical reaction, which is triggered by sensing cellular information,’ says Yasunori Okamoto, lead author of the study. ‘This project represents our first step in that direction.’

Enzymes catalyse nearly all naturally occurring processes taking place both inside and outside of a cell. However, their reaction repertoire is limited, especially in the context of industrially relevant chemical processes. One of the tools scientists use to expand the scope of enzymes is synthetic biology, relying on combining pre-existing cellular components. But just as you are limited in what you can build using a set of Lego blocks, synthetic biology is similarly limited by the range of components available.

To introduce new reactivities and go beyond just optimising enzymes, the Ward group has been implementing a chemical approach. Their artificial metalloenzymes, composed of an organometallic catalyst encapsulated within a host bioscaffold, can be viewed as ‘molecular prosthetics’, bringing unnatural reactivities into a cell.

‘The novelty of this project is putting together three unrelated pieces. We have realised that we cannot easily express streptavidin in mammalian cells, so we decided to bring it into a cell and used cell-penetrating disulfides,’ explains Ward. ‘To bring another level of complexity, we introduced a gene switch regulated by actions of an artificial metalloenzyme.’

According to Akif Tezcan from the University of California, US, who was not involved in the study, ‘the obvious advance in this work is that it enables synthetic control of cellular chemistry in mammalian cells. By going from bacterial to mammalian cells, Ward and colleagues have considerably increased the ante in terms of incorporating non-biological catalysis into living systems.’