Substituting iron with iridium expands the catalytic capacity of metalloenzymes 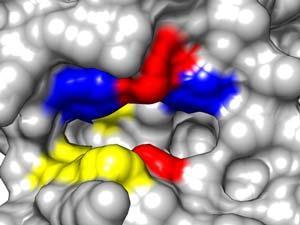 Artificial enzymes that catalyse reactions natural enzymes cannot have been created by US researchers, who substituted other metal ions such as iridium for the iron in haem proteins. The research could provide a route to creating new, biologically-inspired catalysts, the group says.

Nature uses members of the haem protein family, which contain the metal complex Fe-porphyrin IX, as enzymes to catalyse various organic reactions such as oxygenation and halogenation of C–H bonds. In the past, researchers have created modified enzymes to perform reactions not found in nature using directed evolution. This involves creating libraries of variants of the natural protein before selecting the most active for the desired reaction, either naturally or by screening, and repeating the process on subsequent generations. But the activity of a haem protein is ultimately restricted by the Fe–porphyrin complex.

Porphyrin complexes containing the precious metals ruthenium, rhodium and iridium are more active catalysts than Fe–porphyrin complexes, so chemist John Hartwig and colleagues at the University of California, Berkeley reasoned that enzymes containing these complexes might be more active than natural haem enzymes. They genetically modified Escherichia coli bacteria to express the Fe–porphyrin IX proteins, but cultured them in the absence of iron. The bacteria therefore expressed the proteins with the metal site empty. The researchers then added various different metal complexes and tested the activities of the resulting catalysts. No natural haem proteins can functionalise a C–H bond into a C–C bond, but Ir–porphyrin complexes, for example, would do so if an appropriate additional ligand was added to the metal ion. The researchers then evolved their artificial enzymes further to enhance specificity for particular products. ‘This is an approach to developing new enzymes that have capabilities the natural enzymes don’t have,’ says Hartwig. ‘It would certainly be down the road that there would be a particular reaction involving one of these kinds of enzymes to make a product someone wants to make.’ 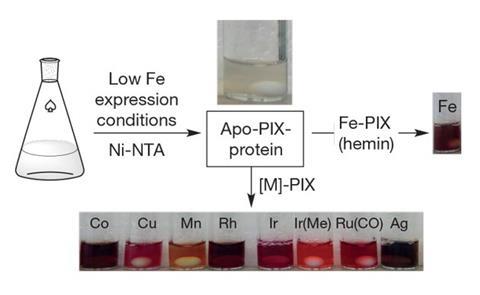 Hartwig’s team grew bacteria in the absence of iron so they produced an iron-free heme protein. Adding metals like iridium to this protein gave it the ability to functionalise C–H bonds

‘I think this is a lovely example of the world of chemistry that remains to be invented using proteins – genetically encoded systems to catalyse useful reactions,’ says chemical engineer Frances Arnold of California Institute of Technology in the US, who was not involved in the research. ‘Why would you make a catalyst from scratch when a bacterium will make it for sugar?’ Bio-inorganic chemist Thomas Ward of the University of Basel in Switzerland agrees. ‘What [Hartwig’s group] has achieved here is truly, absolutely, completely useful and really phenomenal,’ he says. ‘He gets 7,200 turnovers for a C–H activation reaction, which is spectacular! The next step would be to do this all inside an E. coli.’