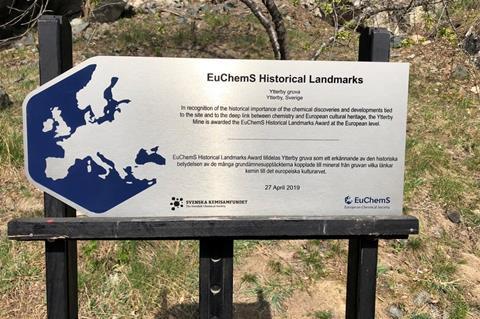 The European Chemical Society (EuCheMS) has introduced a scheme to honour locations in Europe that played a significant role in the history of chemistry by placing plaques that will ‘reinforce the sense of belonging of European chemists’.

The programme was created to coexist with similar schemes run by national chemical societies, which EuChemS says may ‘overlook the European, and even the international dimension, of the chemical sciences’.

One of the first recipients of a EuChemS Historical Landmarks Award is the feldspar mine in the Swedish village of Ytterby, where several chemical elements – including yttrium, ytterbium, erbium and terbium – were discovered. During an event to unveil the plaque, which now stands at the entrance of the mine, the mayor of Vaxholm Municipality Malin Forsbrand said the site was unique, as no other place had more elements named after it. ‘I hope that the discoveries here in our hometown can inspire children to learn more about different matter, create curiosity about research and create pride for our village,’ she added.

Another landmark has been awarded to the industrial complex owned by ABEA on the island of Crete, the site of the oldest olive oil factory in Greece that was founded by the French chemist Jules Dey in 1889.

The guidance on the scheme provided by EuChemS says landmark locations should have had an impact on the development of chemistry that is particularly relevant to Europe. The committee – which is currently made up of five senior chemists – will consider awarding one or two landmarks per year.

Correction: The headline was updated on 15 May 2019