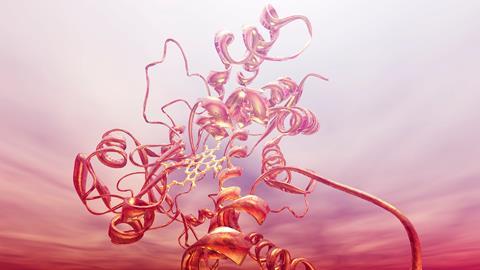 P450 enzymes have been trained to carry out unnatural asymmetric radical cyclisation reactions. By showing that enzymes can direct the stereochemistry of a free-radical process, the findings offer a potential solution to what the researchers behind the work describe as a ‘notoriously difficult’ challenge.

The US team from the University of California, Santa Barbara, and the University of Pittsburgh, repurposed a cytochrome P450 metallozyme, which normally carries out stereoselective oxidation reactions, to perform an atom-transfer radical cyclisation reaction (ATRC). These ATRC reactions have previously only been performed unselectively using small molecule catalysts.

The researchers were inspired by cytochrome P450 enzymes’ ‘innate redox properties’, and believed that these could be transferred to the ATRC reaction. They first screened a range of metalloproteins for any ability to drive the unnatural reaction, which produces a lactam from an amide substrate that contains bromide and alkene groups. Because the researchers were using enzymes, they were then able to use the directed evolution techniques pioneered by 2018 chemistry Nobel prize winner Frances Arnold to tune the selectivity of the most successful candidates.

Intact Escherichia coli containing the evolved enzymes were used to perform the reaction on a wide range of substrate molecules on gram scale, achieving enantioselectivities up to 97% and diastereoselectivity up to 96%.

The team write that their findings offer a promising new way ‘to tame fleeting radical intermediates for asymmetric catalysis’.