A nuclear magnetic resonance spectroscopy technique could offer a quick and simple way to identify hotspots in proteins for engineering new and more efficient enzymes. The team behind the work demonstrated the method by directing the evolution of a muscle protein that usually stores oxygen so that it became an effective eliminase enzyme. 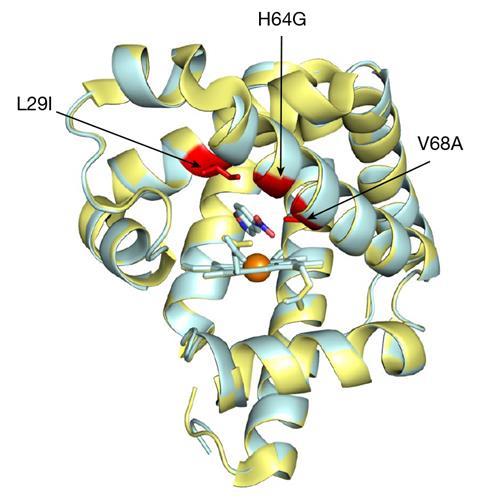 The structure of myoglobin (yellow) overlaid with the structure of the new eliminase enzyme (blue). The three mutations introduced to the myoglobin are marked in red and these sites picked out using NMR created an enzyme more efficient than those designed using computer modelling

Protein engineers use directed evolution as a tool to improve the properties of proteins, as well as to create new enzymes. By mimicking natural selection, it typically involves cycles of mutation of genes to produce a library of variants in which some may have desirable functions. However, with so many potential mutations for a given protein, the space to explore is vast.

Advanced computational approaches usually help scientists choose where to introduce mutations by predicting the locations of beneficial mutations. However, these require structural information beforehand and that’s not always known for proteins of interest. What’s more, these methods struggle to predict remote mutations far from the active site of an enzyme, which could drastically boost its activity.

‘Directed evolution is very powerful, but it is really limited by the game of numbers. There are too many possibilities to explore using brute force,’ says Ivan Korendovych at the University of Syracuse, US, whose lab conducted the new study with colleagues in Japan and Belgium. ‘Think about it as looking for gold deposits randomly in all places in the world, as opposed to limiting your search to Klondike only, where you actually might find it.’

Seeking a different way to pinpoint beneficial mutagenic hotspots, Korendovych and his team questioned if sophisticated calculations were required. Instead, they worked on a hunch that NMR spectroscopy could reveal hotspots without needing prior structural information and provide a pathway to guide directed evolution in a series of steps to reach a desired functional enzyme.

Proving their hunch correct took eight years of data collection, processing and directed evolution experiments. Korendovych says one of the biggest challenges was getting people to believe it was real. ‘We’ve been designing enzymes for a while, but this blew everything out of the water,’ he says. ‘In the beginning we could not believe how well it worked ourselves. We had multiple people repeat the experiments to make sure we were not making some silly mistake.’

The technique identifies hotspots by measuring changes in an enzyme when it binds to an inhibitor. These changes are reflected in the NMR spectra and those signals that change the most indicate the areas of the protein where beneficial mutations can occur.

The team demonstrated the approach by evolving a novel enzyme called a Kemp eliminase – which catalyses a model reaction for testing protein design – from a non-enzymatic iron protein, myoglobin. It was already known that myoglobin adopts catalytic functions associated with oxygen binding when a histidine amino acid is replaced. Starting with this mutated form of myoglobin, the team used NMR to evolve it towards promoting Kemp elimination. The resulting eliminase required just three mutations, and its efficiency surpassed that of proteins designed via computational and bioinformatics-driven directed evolution approaches.

‘The approach is simple yet elegant,’ comments Adrian Bunzel who creates enzymes by directed evolution at the Swiss Federal Institute of Technology in Zurich. ‘Structural biologists have analysed how ligand binding affects proteins for ages. What is exciting here is that the authors had the genius idea to invert the approach and try to ask: how would a change in the protein affect the ligand?’

Bunzel is enthusiastic about the possibilities of the approach but he notes a minor drawback in that NMR spectra need to be assigned first. ‘Depending on the size and flexibility of a protein, it can take a long time to get this,’ explains Bunzel. ‘However – once assignment is completed – NMR-guided evolution promises to boost enzyme engineering and the creation of highly active biocatalysts.’

‘We really hope our approach will be broadly used in the field for various reactions, including the ones used in industry,’ says Korendovych. ‘Ultimately, we think it’ll be a game changer and it will really unleash the power of directed evolution making possible an a la carte development of enzymes.’