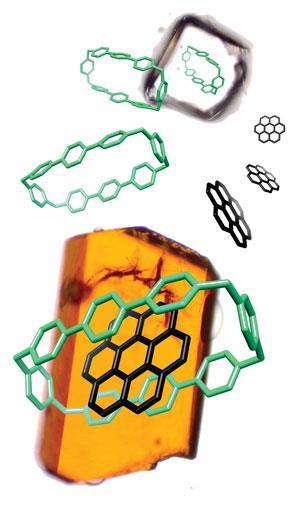 US chemists have designed a novel macrocyclic molecule that may be able to scavenge an important class of toxic hydrocarbons from the environment. The rectangular cyclophane can trap a wide range of polycyclic aromatic hydrocarbons – PAHs – several of which are carcinogenic. The molecule, dubbed ExBox, was shown to remove PAHs from a sample of crude oil. Additionally, the crystallised complex of ExBox and particular PAHs contain stacked aromatic rings which could have novel or unusual electronic properties.

The team, at Northwestern University in Illinois, constructed the cyclophane by taking an extended bipyridine – consisting of two pyridine rings joined by a central aromatic ring – and clipping a dibromoxylene to each end, to form a horseshoe. The open end of the horseshoe was closed with the insertion of a second extended bipyridine. The final molecule – an extended bipyridine box, hence ExBox – is a macrocyclic tetracation deficient in p electrons, and therefore able to form strong, non-covalent interactions with p electron-rich species such as PAHs. These consist of fused aromatic rings and are found naturally in coal and oil, and can be a by-product of the combustion of organic material. Some are highly carcinogenic.

The researchers showed that ExBox can sequester a broad spectrum of PAHs, from small, two-ringed molecules to much larger, seven-ringed species. ‘It is a unique feature of ExBox that it can bind such a wide variety of guests,’ says Northwestern team member Michal Jurícek. To test the scavenging potential of the molecule, the researchers mixed it with a sample of crude oil and were able to extract a number of PAHs into aqueous solution and regenerate the empty ExBox. This demonstrates the molecule’s potential as a way to remove harmful PAHs from the environment, says Jurícek.

‘It is an extremely interesting molecule and we are looking into a number of different aspects of its chemistry,’ says Jurícek. ‘It has four positive charges and it likes electrons, so it can do some interesting redox chemistry, which we are examining.’

Commenting on the work, Jay Siegel, who researches novel molecular structures at the University of Zurich in Switzerland, says that the ExBox system provides a systematic structure-energy relationship for the binding of guests in molecules such as cyclophanes and cyclodextrins, and provides ‘good reference brackets on the nature of surface area and solvophobic-dependent binding. The degree of stability of these complexes and their redox activity will make them further useful for addressing questions in materials chemistry.’