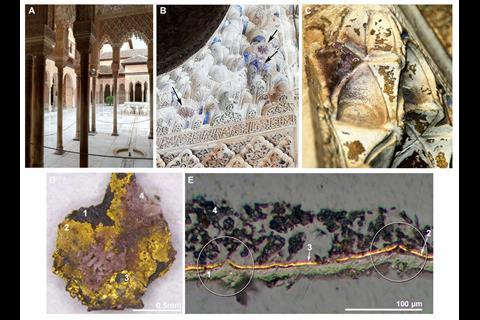 Purple stains are visible on gilded tin plasterwork at the Alhambra 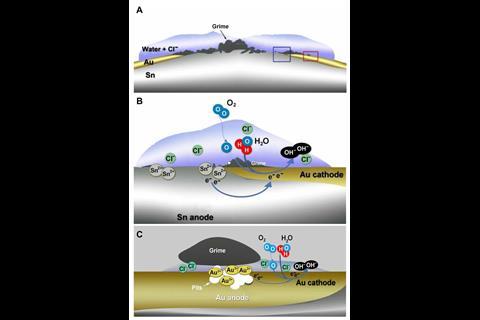 Voids in the thin gold leaf serve as channels through which moisture can reach the underlying tin foil. These channels provide an ionic pathway between the two metals. Tin undergoes oxidation by losing electrons and thus corrodes. Consequently, electrons move from the tin toward the gold. However, gold does not participate in the cathodic reaction. Gold acts as an inert electrode and supports oxygen reduction 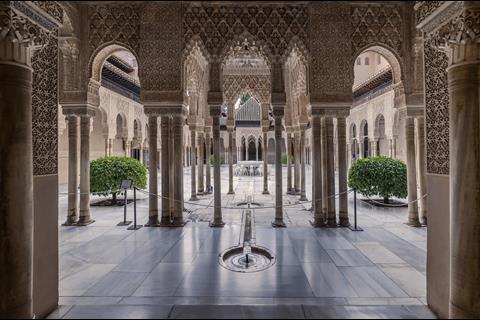 Plaster arches and marble columns surround the Patio of the Lions, a palace in the heart of the Alhambra

Researchers in Spain have discovered the process through which gold decorations at the famous Alhambra Palace in Granada have developed mysterious purple patches.

Gold is known for its stability – its relative chemical inertness in comparison to other metals is one of the main reasons it has been so sought after by humans. But interestingly, many of the gold decorations at the Alhambra palace in Granada, Spain, have corroded and today show a strange purple hue. Now, Carolina Cardell and Isabel Guerra from the University of Granada, have explained the chemical processes that have led to the unusual tarnishing.

The gilded decorations in Alhambra comprise a layer of tin coated with gold leaf. But in some areas, chloride-rich moisture initiated an electrochemical reaction with the tin acting as an anode and the gold as an inert electrode that supports a cathodic oxygen reduction reaction. As a result, oxidised tin ions were able to migrate to the surface, covering areas of the gold foil with patches of tin grime.

With different areas of gold exposed to different concentrations of atmospheric oxygen, further redox chemistry led to some of the gold becoming dissolved. This is later precipitated back out in the form of gold nanoparticles around 70nm in diameter. The relatively uniform size of the nanoparticles is responsible for the purple hue.

The purple patches at the Alhambra are accentuated by a white layer of gypsum that was applied to the deteriorating decorations in the 19th century. Cardell and Guerra suggest that the purple gold nanoparticles likely exist on other ancient gilded objects, but might go unnoticed without the white background to help it show up.