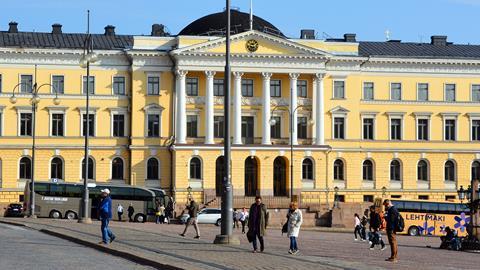 Spectroscopic analysis has enabled researchers renovating a palace in Helsinki in Finland to determine the chemical make-up of paint used on two antique clock faces, allowing them to be restored to their original colour.

The west- and east-facing clocks in the Government Palace’s clock tower were both a dirty white when renovations began in 2004, having faded over time due to the harsh environmental conditions. Conservators wanted to restore them to the colour they would have been when the palace was built in 1822, but it was impossible to tell exactly what this was by examining historical records and early black-and-white photographs, which suggested a dark colour. So they turned to analytical researchers to get to the bottom of the clock tower’s history.

‘It was completely unknown what the original colour was,’ says team member Kepa Castro from the University of the Basque Country in Spain. ‘Restorers realised, after a cross-section analysis of one sample from the clock, that there were many colour layers.’ To find out the composition of the original paint, he adds, it was necessary to use a combination of different analytical techniques.

Helsinki Government Palace clock after (left) and before (right) its restoration

Microscopes were used to examine the cross section of paint scrapings taken from the clock faces, and their elemental make-up was explored using Raman spectroscopy and energy-dispersive x-ray spectroscopy. This revealed many of the different components that made up the paints used on the clocks, including the binders and protective coatings as well as pigments. Combining this information with the little historical information that was available allowed the team to piece together how the clocks had been altered over time.

On both clock faces the earliest colour layer was shown to be a thick, carbon-based black paint, which was consistent with old photographs and drawings. On top of this were various other layers including a thin red layer containing aluminium, iron and silicon. However, as none of the clock faces have ever been pictured or described as red this is thought to be a preparation layer included as a primer for the titanium- and lead-based white paint on top of it. Above this there were grey-brown and blue layers thought to have been added throughout the 20th century.

The original black was eventually chosen as the colour used for the restoration work, although Castro notes the natural black paint that has been used is ‘as susceptible to weathering as the original one’.

Rachel Popelka-Filcoff from Flinders University in Australia says this work exemplifies the way analytical studies can help answer cultural heritage questions and inform restoration. ‘This project utilises the strengths of both the paint and binder analysis, through the use of elemental, structural and organic analytical techniques,’ she tells Chemistry World.