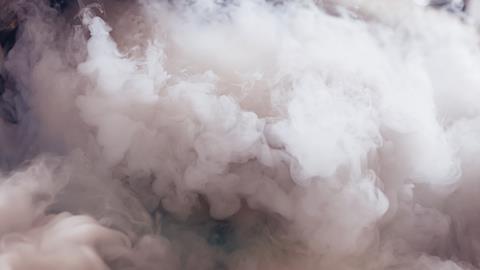 Eighteen people were injured, 10 of them children, by an explosion at a science outreach event in Girona, Spain on 30 September. The accident – which involved the release of nitrogen gas and water vapour – happened during one of the demonstrations on European Research Night, co-organised by the local university. All those injured had been discharged from hospital three days later.

The event has a huge tradition in Girona, according to Marcel Swart, theoretical chemist and director of the Institute of Computational Chemistry and Catalysis (IQCC). ‘It’s wonderful to see the excitement of the kids,’ he says. ‘Since I started working [here] in 2006 … this has been organised every year, with great success.’ Among other activities, this year children could use virtual reality headsets to step inside enzymes and navigate their active sites.

As part of the evening’s entertainment, Dani Jiménez, a science populariser, was performing one of his most popular demonstrations – a controlled combination of liquid nitrogen, boiling water and ping pong balls. When mixed together inside a barrel, the evolving gas propels the ping pong balls into the air, creating a colourful display that is so popular it has become the main attraction of the event in promotional materials and on social media. However, on this occasion, an unexpected explosion shocked the audience.

On videos shared on Twitter of the incident, it appears that the explosion occurred due to the failure of a metallic strap that joined two barrels – supposedly to create a more spectacular display. Jiménez seems to give the go-ahead despite warnings from his colleague, in charge of handling the liquid nitrogen. ‘Well, it’s fine, just hold it … hold it tight and we’ll start,’ Jiménez can be heard saying in one of the videos of the accident posted on Twitter.

Another problem, explains a science populariser who spoke to Chemistry World on condition of anonymity, is the lack of reproducibility. In this type of demonstration, rigorously repeating the experimental setup, reagent quantities and timing is the key to both success and safety. ‘The gas production varies with the amounts of liquid nitrogen and water,’ explains the popularisation expert. ‘It looks like they didn’t measure the quantity of the products, which made it very difficult to predict what was about to happen,’ she adds.

Many chemists expressed similar views on social media – the distance between the experiment and the audience, including very young children, appeared quite small. ‘It was way too close,’ said Chemistry World contributor Chemjobber. Moreover, the lack of physical barriers between the barrel and the public left people completely exposed. ‘Usually, when handling experiments with big gas releases, you should ensure a safe enough distance, at least 15m in a case like this,’ says the science populariser. ‘Additionally, you would ideally block the stage with thick protective plastic screens, to protect the public from potential explosions and debris,’ she adds. Beyond the dangers of the sudden release of large amounts of nitrogen and water vapour – the only danger identified by the University of Girona in their original official statement – broken pieces of barrels also injured spectators.

Spanish newspapers have reported that the explosion is currently being investigated by the police, and Jiménez has offered to help with inquiries. Other reports claim that some spectators have already filed lawsuits against Jiménez.

Until now, Jiménez and his company, CreaCiència, had an impeccable 20-year-plus track record of organising outreach events, theatre shows and producing popular science programmes on TV – mostly in Catalonia.

Swart hopes that the accident won’t harm the public perception of chemistry in the region. ‘Our university is very active in [outreach activities], always valued very positively,’ he says. Over the years, ‘safety measures were there and they were followed’. Further investigation is expected to clarify what caused the accident.

The University of Girona was approached for comment but no response had been received by publication time.