A molecule that can bind and re-solubilise mis-folded proteins in the eye has been identified by researchers in the US. The molecule – a sterol – shows potential as a non-surgical treatment for cataracts – eye drops containing it were able to partially reverse cataracts in mice and restore some transparency in isolated human lenses. 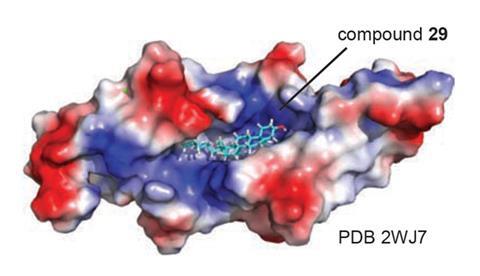 Currently, people who develop cataracts must have an operation to remove them to restore their sight. While this is relatively straightforward in the developed world, Jason Gestwicki from University of California at San Francisco (UCSF), who led the research, says: ‘There are about 100 million people in the world that are currently blind from cataracts because of lack of access to the surgical procedure. A topical treatment with good shelf life that requires minimal training is really what is needed.’

Cataracts are caused by damaged crystallin proteins in the eye lens. These proteins start off soluble and transparent, but they are never replaced and can become mis-folded over time forming opaque, insoluble clumps that are highly stable. ‘If we can find a small molecule that binds the soluble, natural fold of the crystallin proteins – the free energy of that interaction will make that the more stable form … and we’ll basically turn back the clock on the ageing of that protein,’ explains Gestwicki.

But so far it has been difficult screening drugs that target these proteins. ‘The crystallins don’t have an enzymatic function, they’re just structural, so all of the classic ways of finding molecules to bind to them don’t work,’ says Gestwicki. To overcome this, the group developed a novel high-throughput screening technique that involved measuring the effects of different molecules on the melting temperature of the diseased, mis-folded forms of a- and ß- crystallins. As the mis-folded forms are more heat resistant, a decreased melting temperature indicates that they had reverted to the native state. 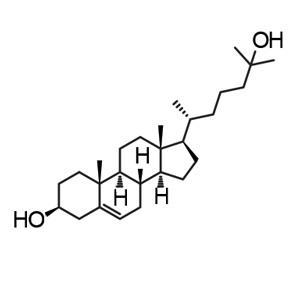 5-Cholesten-3b,25-diol can prevent and even reverse protein misfolding

Their screen identified a handful of molecules – mostly sterols – that were able to decrease the melting temperature of the crystallins. The most promising – 5-cholesten-3b,25-diol – could decrease it by 2°C. Further tests, including NMR experiments, revealed that it was binding to the interface between a- and ß-crystallin where the two proteins formed a dimer. This, the team suggested, may stabilise the proteins and not only prevent the formation of mis-folded, insoluble forms, but actually reverse the process.

The group tested the sterol using eye drops, both on isolated human eye lenses with severe cataracts, and on live mice that had been genetically engineered to develop cataracts. ‘We did see very promising improvements in transparency and protein solubility in the lens … although not a complete reversal,’ says Gestwicki. In most mice, for example, cataract severity as measured using the LOCS III system, which grades lens opacity on a scale of one to five, was reduced by at least one grade when they were given the drops just six times over a period of two weeks. It is not yet possible to measure what effect this has on vision, says Gestwicki, as mice rely primarily on their sense of smell to ‘see’ their world – the next step will be to carry out more tests on animals such as dogs that are a better indicator.

‘These are early studies and there’s a lot of work to be done. But looking down the road you can see that maybe within five to 10 years … you might develop an agent that can slow the progression or even reverse early stage age-related cataracts,’ says J Fielding Hejtmancik from the US National Institutes of Health, who studies eye disease genetics. ‘They’ve done some very nice work here, they’ve shown their active compound can both prevent denaturation and dissolve amyloid-type fibrils.’ He is unconvinced, however, that the sterol would be able to reverse very late stage cataracts. ‘My suspicion is that it may be possible using these agents to reverse the early stages of aggregation, which are basically protein aggregates. If you let them sit around for a few years they’re going to form covalent crosslinks and then you’re not going to be able to solubilise them.’

Gestwicki and his colleagues have formed a spin-out company to develop their technology, and are hopeful that within the next few years they can develop a strategy that works for larger mammals.

If they can show their compound works, says Hejtmancik, the prospects for developing an eye drop based treatment look good. ‘These sterols are probably going to be relatively inexpensive and probably non-toxic,’ he says. ‘But these guys aren’t alone – it’s an increasingly competitive field.’