A faster-acting version of a common insecticide could boost malaria control efforts. The new crystalline form of deltamethrin is absorbed by mosquitoes 12 times faster than commercial forms and could help to limit malaria transmission despite growing rates of insecticide resistance. 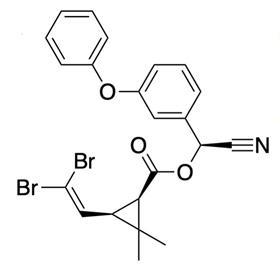 Microcystals of contact insecticides like deltamethrin are crucial ingredients in indoor sprays and treated bed nets used to combat malaria-spreading mosquitoes. But many mosquito populations are developing resistance to these compounds, which is harming efforts to control the disease.

‘The World Health Organization warned that coronavirus-associated disruptions of malaria prevention could cause deaths to double in 2020, rolling back progress made in the previous two decades through labour-intensive distribution of insecticide treated bed nets and indoor residual spraying of microcrystals of insecticides on the interior walls of homes,’ says US-based crystallographer Bart Kahr. ‘Therefore, new interventions or more effective implementations of old interventions are increasingly urgent.’

Now, Kahr’s team at New York University and collaborators at the University of Puerto Rico have discovered a new polymorph of deltamethrin that appears to provide a lethal dose to mosquitoes much quicker than the most widely-used form.

‘Deltamethrin, among other pyrethroids, have replaced the toxic organo-chlorine compounds, but mosquitoes worldwide are now displaying resistance to it. There is no obvious alternative chemical compound,’ says Kahr. ‘Other newly developed insecticides, those in the neonicotinoid class, have other problems: killing pollinators. Faster deltamethrin may extend the life of deltamethrin for malaria prophylaxis.’

Kahr explains that killing mosquitoes with a contact insecticide is a complicated problem in chemical kinetics: a molecule has to move from a crystal’s surface, through a mosquito’s feet and then travel to specific ion channels where it acts as a neurotoxin. By increasing the speed at which the molecule is freed from the crystal surface, more compound will reach the ion channels in a shorter time period, overwhelming the mosquito’s detoxification systems. ‘When crystalline contact insecticides are involved, the rate of uptake is critical and this is a problem of the interactions of crystal surfaces and whole organisms,’ says Kahr.

In Kahr’s new deltamethrin polymorph, individual molecules are less tightly bound than in the old form, and so are released more easily from the crystal’s surface. When the researchers compared dusts of the two forms, they found that the new polymorph knocked down mosquitoes around 12 times faster than the old form. Another benefit is that the new polymorph is made by a cheap and simple recrystallistion process, where the commercial crystals are confined between glass slides, melted and then cooled back down to room temperature.

‘This [study] is another great example that demonstrates how critical the physical structure of an active ingredient is in the interaction with the insects,’ says Svetlana Ryazanskaya, who works on product development at IVCC, an organisation that specialises in producing new tools to tackle vector-borne diseases, and was not involved in the project. ‘The polymorphic forms will differ in their physicochemical properties, such as dissolution and solubility, chemical and physical stability, flowability and hygroscopicity, hence may influence insecticidal uptake and the efficacy of insecticidal chemistry.’

Ryazanskaya says that the findings highlight the need for detailed searches for new polymorphs of insecticidal ingredients, and better understanding of crystal growth within rigid environments, where the crystal’s morphology is defined by its container.

Kahr’s team now plans to explore the new deltamethrin polymorph’s compatibility with commercial spray canisters. The group also wants to investigate the crystals’ efficacy against the most relevant African species of mosquitos, having so far only tested it on North American strains, although they don’t anticipate a major difference. ‘For these studies, we need to collaborate with entomologists who know how to raise these critters in insectaries,’ says Kahr. ‘We are just a bunch of chemists and crystallographers.’