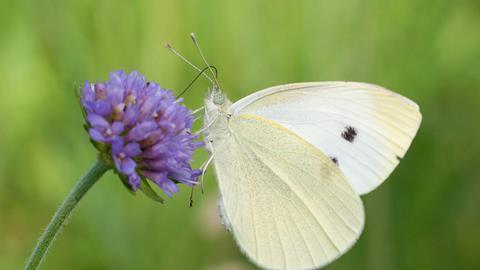 The first ever total synthesis of perseanol – a bridged polycyclic, highly oxidised natural product and potential insecticide – was achieved in only 16 steps. Its unusual structure is related to another natural pesticide that was produced on a multi-tonne scale 70 years ago but has since fallen out of favour. Now, the first biological tests on the synthesised material might finally reveal how perseanol can kill insect pests and revive this class of more eco-friendly insecticides.

Perseanol was discovered in 1996, in a Canary Islands tree related to the avocado. The natural product is a diterpene and is similar to ryanodine, which was once a popular pesticide with 200 tonnes of it made every year in the early 1950s. As cheaper synthetic insecticides became available, ryanodine use declined. Today, sales of synthetic insecticides that work in a similar way exceed $1 billion per year.

Ryanodine binds to calcium channels that control muscle movement, leading to paralysis – both in insects and in other animals. Although few tests exist, they showed perseanol to be more specific to insects – butterflies, moths and true bugs in particular – and less toxic to mammals. But how perseanol actually works is a mystery, says Sarah Reisman from the California Institute of Technology, US.

Reisman and her colleagues have now completed the first total synthesis of (+)-perseanol, a molecule with a bridged pentacyclic carbon core and six alcohol groups, in just 16 steps. ‘The thing that can make these molecules really lengthy to prepare is if you have to spend a lot of time adjusting oxidation states and protecting groups,’ Reisman explains. ‘We wanted to install the alcohol groups in a way that is both stereoselective but also redox-efficient, meaning not using lots of protecting groups and not unnecessarily manipulating that oxidation state up and down.’

The chemists use two simple starting materials: pulegone, one of the essential oils in catnip, and a vinylogous ester. Each fragment is modified over six steps, and they are brought together in a lithium–iodide exchange followed by a carbopalladation–carbonylation cascade. These two steps build perseanol’s entire structure; the eight following steps then attach side chains.

‘The [cascade reaction] is particularly amazing, as it constructs the two rings and the quaternary carbon centre in a single step,’ says Masayuki Inoue from the University of Tokyo, Japan. Inoue, whose team synthesised a related compound last year, calls the work ‘one of the best examples of convergent total syntheses of terpenoids’.

Sadie Otte from the Keck Science Center, US, who recently completed a PhD in natural product synthesis, is similarly impressed by palladium-catalysed cyclisation cascade. ‘One of [Reisman’s total synthesis] strategies is to approach the first disconnection – breaking the molecule into two pieces of equal size and complexity – with the mind of a child,’ she says. ‘This avoids preconceived biases of what is possible … and has led to some creative retrosynthetic disconnections.’

Although the perseanol’s complexity would make it unsuitable as an agrochemical, Reisman says ‘it’s an excellent probe molecule to learn a little bit more about this family of molecules – whether it really acts on the ryanodine receptor or if it has insecticidal properties but does not act at that receptor’. If the latter is the case, tests could reveal new modes of action tackling pests that have become resistant to ryanodine-inhibiting compounds.

Her team has now synthesised enough perseanol to begin work on the first biological tests.